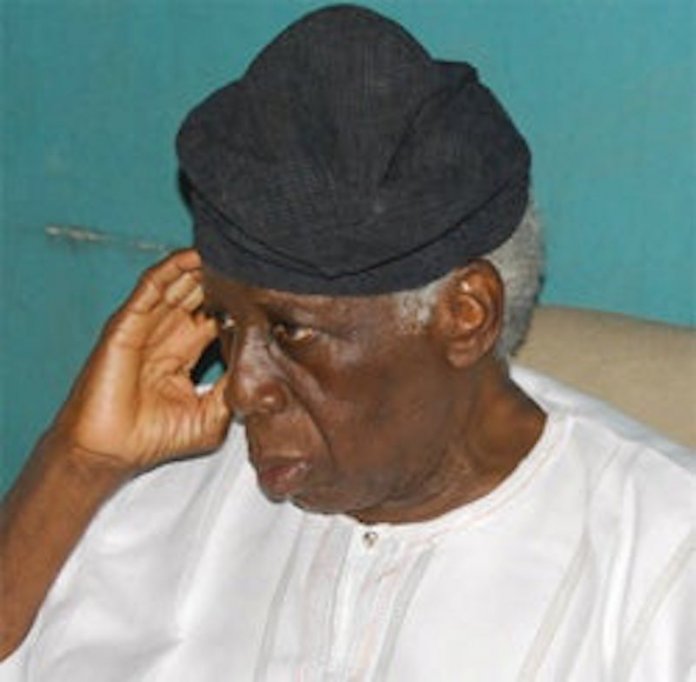 In this piece, I ask a very simple, but which seems to me a fundamental, question that provides another insight into Nigeria’s protracted predicament since independence, sixty solid years ago. The question is: what does Nigeria as a state value? This reflection was forced on me most brutally when I contemplate the trajectory of the life of Dr Omololu Olunloyo. The mathematical genius and public servant turned 85 on April 17. On that day, I found myself just uneasy with Nigeria as one often does these days. Even though only a few might have noticed, but Olunloyo’s existence has become a metaphor for all that is wrong about what Nigeria fails to value. Dr Olunloyo must have come to terms with his lot in life as a prodigy, a national celebrity, who must have faced the challenges of managing the obsession that early and prolonged success, eccentricity that comes with gifting, and stardom created, and which, of course, was the lot of his generation; and he needed to have done that a long time ago or he would not have achieved his present octogenarian status. But his current declined personal state, for me, reflect badly on a state that refuses to value those who personified the best that Nigeria was and should be and who arguably but surely, invested their lives and patriotic endeavors in transforming Nigeria into a country that takes the welfare of her citizens to heart.

The question of value may appear so intangible, especially compared with the hard issues of governance, politics and the economy. But in the final analysis, it serves as the fundamental basis of the choices that a state and her government and political elites make. It is the valuation of what is worthwhile, over what is insubstantial or trivial, that backstopped the attention that a leadership places on policy dynamics that yield dividends of democratic governance to the citizens. Thus, if the leadership of a state loses the sense of what is valuable, especially what is valuable in terms of the betterment of the lives of the citizens, then it thereby loses its legitimacy in their eyes of those same citizens.

It is in this sense that Laureate Wole Soyinka’s prescient judgment of a “wasted generation” enables us to focus on how a country as blessed as Nigeria has continued to waste her capitals—generational, social, ethnic and individual. Dr Omololu Olunloyo represents a figure that cuts across these levels. This is a person whose achievement beats all imagination. Existentially, his life teaches a great lesson on how the Nigerian youths could stare down potentially crippling life situations. He lost his father at 13, but still rose from a humble background to earn a First Class honours degree in Mechanical Engineering and a doctorate in Mathematics at the St. Andrews University, Dundee, Scotland, and became a Commissioner at 27. He is the very emblem of erudition, patriotism and service. His insight into the population debacle of 1962 census—that population density ought to decrease as one moves toward the desert—has remained locked down under the weight of terrible politics that has undermine the capacity of a proper population figure to backstop a good governance and economic planning.

His near-mythical status as a mathematical genius was particularly what led me to adore him as a young lad assiduously searching for role models to guide my slippery path as a youth. And so, it was only normal that someone who I had to admire at a far distance would automatically become one of the first for me to seek out when I launched the Ibadan School of Government and Public Policy (ISGPP) in 2016. It was time for me to project my yearning to push some of these figures into the front burner of national reorientation and moral renewal. I had the shock of my life when I stepped into his Molete home. The image of infrastructural degeneracy (and possibly personal depression) into which this patriotic icon of public service has been consigned is tragic and damning. No one who goes to see Dr Olunloyo will fail to see the paradox: this is a man who lived amongst books, from Metaphysics, Mathematics, Astronomy, Philosophy, Theology, the Sciences, to Literature, Classics, Politics, Economics; and yet, the Nigerian state does not consider his erudition worthy of use or celebration.

My encounter with Dr Omololu Olunloyo only reiterate my concern with all the other Nigerian geniuses that have over the decades form the basis of my admiration—Wole Soyinka, Ayodele Awojobi, Chike Obi, Eni Njoku, Claude Ake, E ‘Latunde Odeku, Ishaya Audu, Chinua Achebe, Ken Saro-Wiwa, Tai Solarin, Bolanle Awe, Taslim Elias, Ojetunji Aboyade, Chu Okongwu, Grace Alele-Williams, Ben Nwabueze, Kayode Osuntokun, Bala Takaya, Akin Mabogunje, Ibrahim Tahir, Odia Ofeimun, and many more. Across this spectrum, we have a cornucopia of ethnic, social, national and generational capitals which Nigeria has thrown under the bus of political expediency. These are names and figures that today’s Nigerian youths could no longer identify with or even consider as role model. They have been eclipsed by an ambivalent youth (counter)culture that prop up dubious character as models. Today, advanced fee fraud (Yahoo Yahoo) pays more than sincere hard work.

And it is so easy today in Nigeria to see the dynamics that bleached the legacies of these patriotic avatars in the same lack of attention we pay to the upcoming generation and their outstanding efforts to break free from criminality. It is therefore interesting today to see the consistent profiling of excellence in any field in the media, from a first-class graduate to a distinguished entrepreneur, and from an accomplished professional to a dedicated artisan. No one wants to be a teacher any longer in a state where teachers struggle with poverty, and where public servants are forced into corruption. And we then come back full circle to our original question: what do we value as a people?

Nigeria is really adrift. For sixty years, the ship of state has been trying to breach the yawning chasm between expectations and aspirations. We do not know what defines us as a people. There are no values anywhere by which we can chart a standard of national coherence. There is even no existing framework by which we can make sense of what works and what does not. When we chanced on crude oil in 1962, the Nigerian leadership then was bold enough to say the fundamental problem was how to spend the petrodollar. And this was not a surprising statement because there was no framework of valuation to assist the leadership in redirecting the flow of money into economic projects moderated by non-economic values. It therefore became so easy for corruption to become a way of life. It became so easy for the political elites to consistently perceive the masses as mere pawns only useful in electoral mobilization processes.

It was so difficult for a leadership without ideological orientation to deeply appreciate the values of intellectual patriotism provided by significant individuals who had a deep understanding of the value shift and moral rebirth Nigeria needed to undertake. All that was needed was for the Nigerian state and its leadership to tap into the generational, ethnic, national, social and individual capitals to sift and put together a plausible framework of valuation that will reorient our national development dynamics. Unfortunately, we allow politics to trump everything. Political considerations are so powerful that a president will fail to have an economic team made of the enormous intellectual capital Nigeria is blessed with. Nigeria has therefore descended into a deep chasm of unfulfilled dreams; a space for loud emptiness where hypocrisy and sycophancy compete for preeminence. Greed continually feeds elite considerations in all matters. And what is worse, the generational capital represented by Dr Omololu Olunloyo is frittered away; and it eventually degenerate into generational vicious cycle of devalued stagnation that has kept Nigeria in a perpetual motion without movement for sixty years of statehood.

A nation is the sum of all it values. But what does Nigeria value? From Finland to Germany, and from the United States to the United Kingdom, developed countries have all accepted the role of education as the most fundamental sector that not only underpins the development of any state, but also essentially facilitates the establishment and consolidation of national value orientation. But the educational sector of the Nigerian national life has remained one of its most battered sectors. It is one of the sectors that received the lowest budgetary allocation. Indeed, it is one of the sectors the government undermine at every turn. It is even the sector that the government readily thinks of depriving of its budgetary allocation to tackle national emergency like the coronavirus pandemic! We therefore have a tragic situation where we have remained on a spot for many decades because succeeding leadership has refused—wittingly or unwittingly—to generate a national discourse that will focus squarely on Nigeria’s national failings, chief of which is the blatant lack of a national value system around which our understanding of development and progress can be determined.

And there is a good way to overturn this generation of national wastage. Dr Omololu Olunloyo and many of his cohorts are still alive. Many of them have not become disillusioned because their patriotic energies are still fired by the need to serve. Who can doubt the patriotism of Wole Soyinka? How many can still match the depth of brilliance of a mathematical mind like Olunloyo’s applied to, say, Nigeria’s national planning? What about Atedo Peterside, Pat Utomi, Toyin Falola, Funke Opeke, Chimamanda Ngozi Adichie, Oye Gureje, Rabia Salihu Sa’id, Enase Okonedo, Obadiah Mailafia, Muhammad Ali Pate, Kingsley Osadolor, and a host of others who are willing to serve? Nigeria needs what we can call a “National Capital Project” around which her valuation dynamics can be established. Such a project would have the objective of benchmarking a system of national values founded on the legacies of Nigeria’s generational and national capitals represented by these eminent figures. And, such a project also serves as a means of arresting the freefalling wastage that virulently infect present and coming generations with a sense of loss and degeneracy. Nigeria means something, which is why these key figures still believe in her. We have to work hard to recuperate the Nigerian image to ensure that it means something for the new generations too.