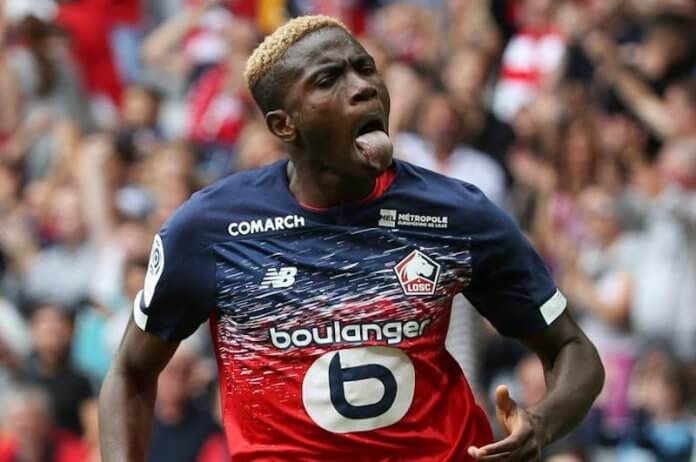 According to a recent report by French news outlet Le10Sport, Premier League giants Chelsea are said to have contacted Ligue 1 outfit LOSC Lille to discuss the potential summer transfer of Nigerian international striker Victor Osimhen. The report suggests that the French club have received multiple firm offers for the striker’s services and that Frank Lampard’s Chelsea are certainly among the clubs said to be interested in his signature.

Contrary to rumours floating around which state that Chelsea are going to hold back on spending amid the COVID-19 pandemic, the report suggests that the reality of the situation is actually the opposite. It has been clarified that the Blues are still extremely eager to sign players in the summer and that they are in a good position regarding the Victor Osimhen signature. Despite the excellent relationship between the two clubs, the Ligue 1 side are said to believe that they can get more than the €80m they got for Pepe from Arsenal.

The West London club started the campaign with three recognised strikers for Lampard to choose from. Despite the decent form displayed by Tammy Abraham, the position gradually became an area of concern for the staff and fans alike. For all the excellent work that Abraham did in the early part of the season, an unfortunate back injury forced the Englishman out of the side for quite a while. The gaffer’s alternate options for the role included Olivier Giroud and Michy Batshuayi.

The Belgian was given the opportunity to prove himself first. Although he did get a couple of decent goals along the way, the former Valencia man struggled to have any sort of meaningful impact on the pitch. Olivier Giroud was then brought into the team, and despite his advancing age, the Frenchman came good for the Blues when it mattered most. Although this could be perceived as a good thing, the fact remains that the Blues were uncertain with their striking options for the more than half of the league season, and that’s one mistake they don’t want to make again.