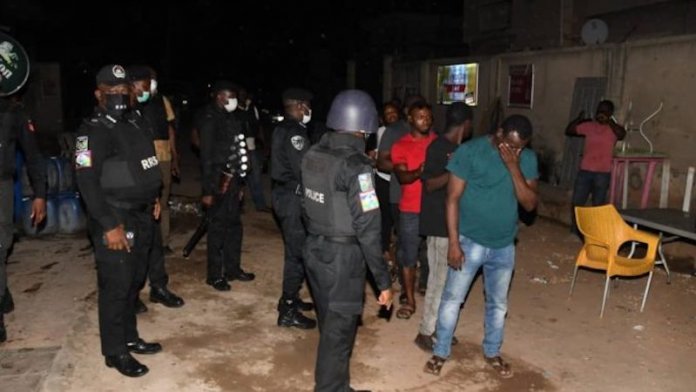 There was panic in some parts of Lagos yesterday following an attempt by ‘One Million Boys’ to storm and attack residents of Oworonshoki and other parts of the city.

The Rapid Response Squad (RRS) of the Lagos State Police Command was said to have successfully averted the daylight robbery by the suspected hoodlums.

However, some eyewitnesses claimed the hoodlums successfully robbed residents of Oworonshoki, Mushin and Itire areas.

Though the police said they averted the robbery attempt, the incident may not be unconnected with the unprecedented gridlock on Third Mainland Bridge, despite the lockdown still ongoing in the state.

Speaking with THISDAY on condition of anonymity, an eyewitness who resides in the area, alleged that the hoodlums were part of the self-acclaimed, ‘one-million boys’.

He said: “There was massive traffic this morning on Third Mainland Bridge. The gridlock extended through Oworo Bridge, which was where the ‘one million boys’ came in from.

“There is a path under Oworo Bridge, which they took. I believe they must have converged there overnight waiting to strike, but we held vigil till day break securing the area, and only went to bed at about 6a.m. So, they could not strike. But at about 8a.m this morning, we got informed that they had attempted to rob at Oduduwa Street, Oworoshoki.

“Boys were able to chase them away. We went on the street with sharp and dangerous objects trying to guard the street, while the police came to meet us. Everywhere has returned back to normal now after the police showed up.”

In a statement made available on the Twitter handle of @rrslagos767, the state police command said the hoodlums were planning to stage an attack against the residents and motorists on the highway when the RRS team got a wind of it and swiftly came to their rescue.

“Police officers acting on a tip off from concerned residents got information that some hoodlums were planning to stage an attack against residents of Oworonshoki.

“The youth in the area came out wielding bottles but we got there on time to handle the situation. Normalcy has been restored.”

The Commissioner of Police, Lagos State, Mr. Hakeem Odumosu, and heads of other security agencies in the state, including the army, air force, navy, and the Department of State Services (DSS), had on Sunday embarked on confidence-building patrol across the state.

During their visits, the security heads took turns to address the residents of the various communities in English, Yoruba, Igbo and Hausa languages, assuring them of their safety.

Odumosu had reassured them of the unwavering commitment of the law enforcement agencies to protect their lives and assets.

He had also urged them to shun rumour-mongering and spreading fake news and described the rumour making the rounds on social media that a gang of criminals known as ‘one million boys’ were planning to attack some communities in Lagos State, as “baseless.”