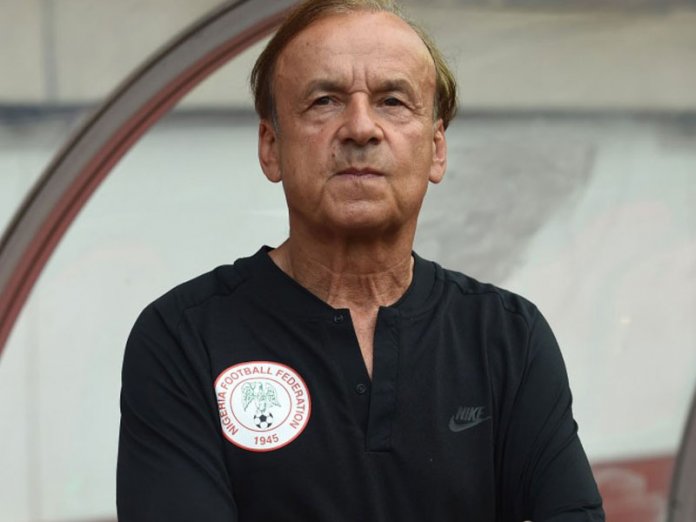 Twice, Nigerians have called for the head of Gernot Rohr after returning from major tournaments with the Super Eagles-2018 World Cup and the 2019 AFCON -and on both occasions, the eggheads of the Nigeria Football Federation failed to act against him. With the stringent conditions attached to his contract renewal, it now seems the NFF may be ready to dump the Franco-German tactician, Kunle Adewale writes

Yes, Gernot Rohr had qualified the Super Eagles with a game to spare for the two major tournaments Nigeria had participated in –the 2018 World Cup in Russia, where the team failed to go past the group stage and the 2019 Africa Cup of Nations in Egypt, in which the Eagles lost out in the semi-final.

However, analysts are of the opinion that the Franco-German tactician does not possess the tactical savvy to take the senior national team to the dream land.

There is a strong opinion that Rohr’s changes cost Nigeria the game against Argentina in the last group game of the Mundial in Russia, while it was glaring that the Super Eagles lost to the tactical superiority of our opponent’s coach in the semifinal of the AFCON in Egypt.

Rohr’s biggest criticism is that his Super Eagles lack a clear identity since he took over.

While Nigerians were calling for the sack of the former Gabonese Manager, NFF Boss, Amaju Pinnick was toying with the idea of sending a supposedly expatriate for a refresher course abroad, but considering the outcry that followed, it never saw the light of the day.

While reacting to Pinnick‘s statement, Ikhana who is a member of the 1980 Green Eagles squad when Nigeria won the first African Cup of Nations title, said the football authority should have invested the funds in indigenous coaches.

“If you feel Rohr has not done well, why not ask him to leave, that’s the honourable thing to do. But if he has done well, why not, he stays. But sending him on a refresher training is what I cannot fathom,” stated Ikhana.

“Is it not a waste of resources? We have so many ex-internationals in this country who are coaches. Why not send some of them on coaching clinics? After all, when they come back, it will be to the benefit our football generally rather than on a foreigner.“

“Why should NFF be talking about spending more money to retrain someone who is on a huge salary? Why not take that money to train some young coaches who will in turn impart their knowledge on the development and improvement of the game in the country?, ”Ikhana concluded.

Having refused to discard the German after two failed missionary journeys, observers were however taken aback when pinnick came up with three stringent conditions the former Bordeaux of France player must meet – He must reside in Nigeria, his salary will be paid in naira, he must watch local league matches with a view to picking players that could be nurtured to become international stars, for his contract to be renewed.

“In one week, Rohr will get his contract; he should study his contract and come back to us. So, give and take, within seven days, he should have his contract,” Pinnick stated in an interview on Arise TV ‘Morning Show’.

“The only thing that can impede the contract is if he refuses some of our new clauses in the contract.

“Rohr should live in Nigeria and go around to watch the league matches and see how to nurture the players.

“He has to be paid in naira, we will pay him naira equivalent of the dollars, we have to strengthen our currency. If he’s able to accept, we have a deal.”

Pinnick also assured Nigerians that getting a new coach won’t be a challenge should Rohr decline the terms.

“I get calls every day from coaches that want to come here,” Pinnick added.

“We have always had wonderful relationship with him. The process is ongoing and the document has been sent to our external solicitors and it will come back to the NFF before we send it to him. I cannot mention the names of the very top coaches who have showed interest in the Eagles job,” Pinnick noted.

“We will seek legal opinions on international coaches’ contracts. We shall also seek the opinion of the Sports Ministry. He should get the contract (with the new conditions) in about a week’s time so that he can revert after studying it.”

In his reaction, Rohr claimed that since his appointment as the Nigeria’s senior national team Manager, he had spent more time in Nigeria than in Europe, saying that he had in the past invited 24 home-based players to the Super Eagles, with many of them earning contracts abroad after their call-ups.

The German football tactician has now aimed a thinly-veiled dig at Pinnick for going on air to discuss the conditions attached to his new proposed contract.
“My philosophy is not to speak publicly about these things. Already, I’ve spent more time in Nigeria over the past three years. All my players, except one, plays abroad,” the former Bayern Munich defender said.

Rohr added that he’s received offers over a coaching job but his first priority was to continue coaching the Super Eagles, saying money was not a deciding factor.

“I’m waiting for the contract proposal. Things could be very easy. I don’t want more money, bonuses… just want to keep doing this.

“Personally, I received a few offers from other countries but I rejected them. I just want to take this team to the next AFCON and World Cup.”

“I’ve invited about 24 local players since I was appointed. Funnily, most of them get a contract in Europe almost immediately.

“It’s difficult getting local players who are better than the ones we already have. That’s why CHAN is important.”

Pinnick however said the need for Rohr to live in Nigeria was to ensure that he “goes around to see how to nurture domestic players and make them a part of the Super Eagles”.

“Rohr should not just rely on second-hand reports about domestic players,” Pinnick said. “He needs to help domestic players actualise their dreams of playing international football”.

Pinnick reiterated the federation’s preference to retain the Franco-German for the next AFCON and World Cup, but said despite Rohr having “done so well” in his time in charge, the NFF would not hesitate to jettison him if he baulks at the terms of his new contract because “nobody is indispensable.

“We believe he has done so well and we can maintain this dynamic and relationship. We have a young, talented and disciplined team and we believe they can do very well in the next Africa Cup of Nations and the next World Cup.

“The only thing that can impugn it is if Rohr refuses the terms of the contract.”
Pinnick’s new stand however contradicts his opposition against calls for Rohr’s sack after Super Eagles’ lacklustre performance at the AFCON in Egypt.

“He will remain in the job. I have complete confidence in him,” the NFF president assured in spite of renewed calls for Rohr’s sack following the semi-final defeat to Algeria at the 2019 AFCON.

“There are some people that have been calling on me and the federation to sack Gernot. But I am not going to do that. In fact, Gernot is going on a refresher training period with Bayern Munich after the Nations Cup. We have a long-term plan with him.

‘We have had rocky and difficult moments in our relationship, but this is normal in any relationship between two people. He is a good coach and we want him to remain with us. That said, we will work together on what needs to be improved upon,” Pinnick had assured then.

In a telephone chat with former Nigeria international, Mutiu Adepoju soon after the German was employed in 2016, he admitted that Rohr may not be one of the best coaches in the world but thought he was right for the job considering the little time the federation had to employ a new coach.

“If we are thinking of bringing the best coach for Nigeria at this time, we would just be going round and round. I just believe Rohr is the right person we can get now and I think he would do a great job for the team considering the way he has related with them, his intelligence and the working ethics he has brought,” Headmaster as he was fondly called by his admirers told THISDAY then.

Since taking charge of his first game against Tanzania on September 3, 2016, Rohr has overseen a total of 40 matches, winning 23, losing nine and drawing eight over four years.

The Super Eagles have also scored 61 goals and conceded 34 in his time in charge.