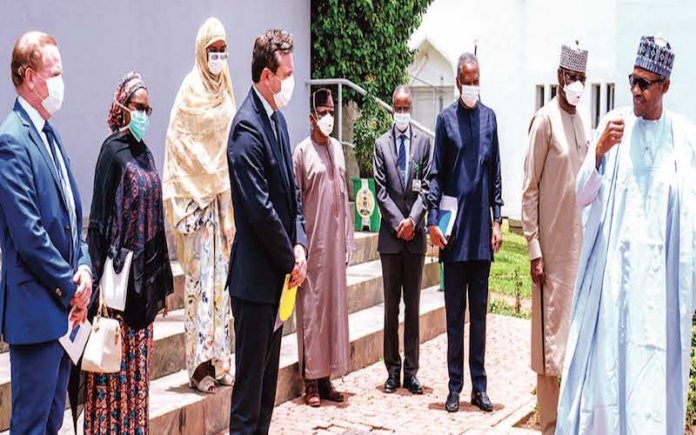 •Trump cuts aid to WHO

The European Union (EU) yesterday donated €50 million, an equivalent of N21 billion, to support Nigeria’s fight against COVID-19 to the excitement of President Muhammadu Buhari.

This came as the United States President Donald Trump yesterday announced an immediate cut of funding to the World Health Organisation while his administration reviews the United Nations agency’s handling of the Coronavirus.

The move followed weeks of Trump’s escalating attacks on WHO, accusing it of bungling the response and failing to communicate the disease’s threat.
US contributes more than any other country to WHO, at more than $400 million per year. Cutting off funds to the group, which has a $4.8 billion annual budget, would be a major blow to the organisation as it conducts vaccine trials, distributes test kits and advises governments around the world.

EU Ambassador Kelti Karlsen, who led the delegation to the State House in Abuja to make the presentation to the president, described the fund, which was said to have been channelled through the UN COVID-19 basket fund, as the largest single contribution and support that EU is providing anywhere outside Europe.
The ambassador said the gesture was a swift response to Nigeria’s call for assistance and a demonstration of EU’s partnership with Nigeria.

‘‘We heard your call for assistance and EU has reacted swiftly as a demonstration of our true partnership,’’ he said.
A statement by the president’s media adviser, Mr. Femi Adesina, said Karlsen congratulated Buhari for ‘‘a very powerful address to the nation last night,’’ adding: ‘‘Indeed, the current situation is no joke and we wish to commend you for taking bold and necessary measures.’’

Karlsen stated that the EU was still mobilising other sources of funding, while the union had already paid €1.2 million Euros to UNICEF and goods purchased through such funding are expected in the country soon.
Reacting to the donation, the president said it would help in supporting Nigeria’s efforts at combating and containing the virus and assist in revitalising the national health care system.