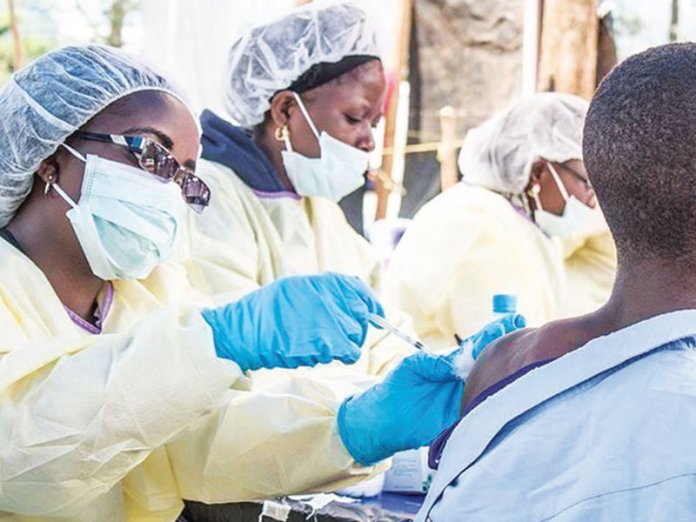 In less than two months of tackling the COVID-19 pandemic in Nigeria, healthcare workers, who are at the front line of the fight, are increasingly been exposed to the infection. Martins Ifijeh writes on the need for government to protect them at all cost, if it hopes to defeat the outbreak in the country

As at Tuesday morning, at least 3, 000 health workers, including doctors, nurses and laboratory scientists have been infected by the COVID-19 across the globe since the outbreak started in December 2019, according to the World Health Organisation (WHO).

The Director General, WHO, Tedros Ghebreyesus had told the world that of the 3, 000 infected health workers, many have paid the supreme price all in a bid to provide care to COVID-19 patients, and that this in no way was slowing down the fight against the scourge.
Although WHO says 3,000 health workers have been infected worldwide, Italy’s Ministry of Health has announced that over 4,500 health workers have been infected in the country alone, with at least 400 of them already lost to the pandemic.

Already, Nigeria is beginning to experience its fair share of the crisis among health workers. As confirmed cases of the virus continues to rise, those at the front line are increasingly being exposed to the virus due to many factors, including government induced, patient’s decision to hide travel history, as well as the health worker’s negligence.

For instance, in the University of Ilorin Teaching Hospital (UITH), not less than 28 health workers have been unduly exposed to the novel coronavirus having been in contact with a confirmed case, an accountant, Muideen Obanimomo, whom reports said a professor of medicine had hidden his status while asking health workers in the hospital to treat him.

The patient who came from the United Kingdom had gone to the hospital on the advice of his friend, the professor, where they told health workers he was sick of food poisoning even though he was already at the advance stage of COVID-19.

The patient eventually died on COVID-19, but at least 28 health workers, who should be attending to other patients by now are in self-isolation as both the professor and the diseased have put them in harm’s way.

The Chief Medical Director of the UITH, Prof. Abdullahi Yussuf, who announced the measures taken on the 28 health workers, said: “Already, all the UITH workers with close contact with the deceased patient on the night of his admission, or his corpse have been ordered to proceed on self-isolation. Besides, the ‘A and E’ ward and the ambulance used to convey his corpse to Offa had been promptly fumigated.

“We have contacted the state Technical Committee on COVID-19 to look for those who performed all funeral rites on the corpse and those who had contact with the wife of the deceased including the mourners to keep them in isolation and give them necessary medical treatment.”

In the same vein, at least 12 healthcare workers at the Lagos University Teaching Hospital (LUTH) have been placed under compulsory isolation after they came in contact with a confirmed case of COVID-19.

The patient had gone to LUTH to complain of health issues but hid his travel history whereas the coronavirus had started taking a toll of him. he eventually died of the illness, but not after 12 health workers had contact with him.

Although the Chairman, Medical Advisory Council (CMAC), LUTH, Prof. Wasiu Adeyemo had said of the 12 health workers, only three were being watched closely as they were the ones who really had very close contact with the patient.

In Irrua Specialist Teaching Hospital (ISTH), what health workers feared most happened to some of its members. Two medical doctors have tested positive for the virus after coming in contact with confirmed cases.

It was gathered that the two affected doctors, who worked at the facility’s Pathology and Obstetrics and Gynecology departments respectively have been placed under isolation in their different homes.

It is believed the doctors became infected after attending to two patients without protective gear and unknown to them that the patients were carriers of the virus. The doctors were only tested when they started exhibiting symptoms of COVID-19.
Meanwhile, in the University of Benin Teaching Hospital (UBTH), at least 25 health workers have been placed under self-isolation after coming in contact with three confirmed cases of the disease.

It is believed not less than two health workers have been confirmed positive to the virus in the hospital.

A public health expert, Dr. Onyeka Obi-Atim told THISDAY that some of the challenges faced by healthcare workers in the frontline of combating the disease were lack of Personal Protective Equipment (PPE) and lack of truth from some patients. This is still one important work tool needed at this critical time if the country really wants to defeat the outbreak.

“Since we are having cases all over the country, government and other private health facilities should provide these supplies for their health workers. Whether these health workers are seeing COVID-19 patients or not, because you never can tell who is infected or not.
“And worse still, some of the patients who come into the hospital end up hiding their travel history.”

He said: “That’s why we must ensure that health workers have the medical masks and other personal protective equipment they need.”
As of April 8, there had been 1.5 million confirmed cases of coronavirus across the world, with over 80,000 deaths.

Ghebreyesus, while stressing on the need for countries to protect health workers at all cost, highlighted the vital role of nurses and midwives, in commemoration of the International Year of the Nurse and the Midwife.

He said, “It may not seem that there are many reasons for celebration. The world is in the grip of the most severe health crisis of our time. The COVID-19 pandemic is reminding us of the vital roles of nurses and midwives play.

“Every day, nurses are putting themselves at risk to alleviate suffering and save lives. They’re reorganising wards to open more beds for COVID-19 patients, while continuing to provide care for other patients with urgent health needs, including women in labour.
“They’re taking stock of equipment and lending it across units. They’re learning on the job with information that changes daily – even hourly. Nurses are doing the unthinkable.

“Because critical COVID-19 patients are isolated, the last human touch they may feel is that of a nurse’s hand. The kindness of caring for strangers has never been more important.

“I hear stories about nurses video-calling family members late in the night, so they can say goodbye to a dying relative. Health workers are on the front lines of the fight against COVID-19, they’re also among the most at risk,” he added.
A medical doctor, known only as Dr. Olufunmilayo on Twitter said Nigerian doctors are only paid N5, 000 hazard allowance despite the risks associated with their practice.

The President of the Nigerian Medical Association, Dr Francis Faduyile, in a statement to commemorate the World Health Day, on Tuesday expressed concern about hazards faced by healthcare professionals, including nurses, treating COVID-19 patients.
He said: “Our health workers must be protected against contracting the disease. There should be PPE available to them as they are on the frontline of combating the disease in the country,” he said.

On the new pattern by some COVID-19 patients who lie about their travel histories, the Director General, Consumer Protection Council, Tunde Irukera said discussions have started on the earliest possible regulatory framework to penalize those who conceal vital information during hospital visits.

The Health Writers Association of Nigeria (HEWAN) has on its part, called on the federal and state governments to ensure those in the frontline are well compensated and are given adequate protective gears during treatment of patients.

The President of HEWAN, Mrs Chioma Obinna said: “Healthcare workers represent one of the most vulnerable populations in terms of contracting the highly virulent disease due to the nature of their jobs and therefore, must be adequately taken care of. We strongly advocate that the federal government institute attractive welfare package and health insurance cover for health workers combating COVID-19 in the country.

“The welfare package must be well defined and spelt out in line with global standards. To have a fighting chance against COVID-19 and in treating those requiring intensive care, government must invest adequately in the health sector to ensure that health workers are properly equipped with PPE such as gloves, masks, ventilator equipment, IV saline, and other medically critical supplies to ensure they can safely and appropriately care for patients with COVID-19,” she said.