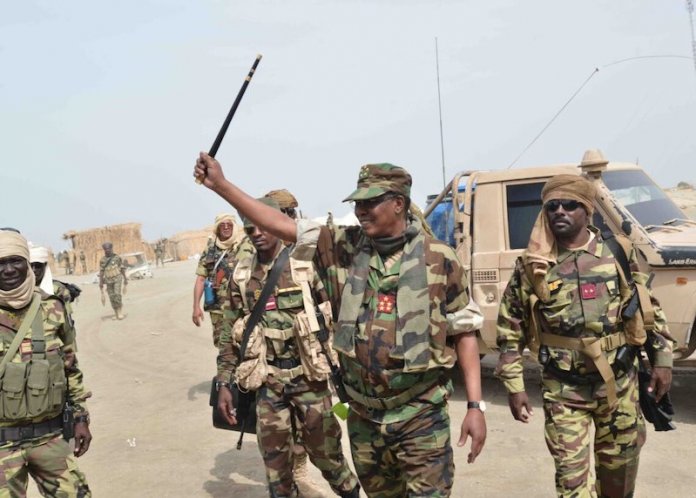 Deby issued the warning in a state address to his countrymen shortly after leading his army in an offensive against the terrorists that left about 100 killed.

According to the president who spoke in French, Shekau has the chance to surrender now or risk being smoked out of his hideout in Dikoa, adding that he would be killed the same say some of his commanders were killed.

Following a seven-hour ambush on Chadian troops by the terrorists that left 92 soldiers dead recently, Deby who said he would not accept defeat launched ‘Operation Wrath of Bomo,’ to avenge the death of his men.

Named after the town where the Chadian soldiers were killed, the operation, which commenced last Thursday, saw the president leading his armed forces to battle at Kelkoua bank and Magumeri where they fired rockets and 12.5mm rounds ammunition on the criminals.
The troops were said to have also destroyed several Boko Haram terrorists bunkers, recovered cache of arms and arrested a top Boko Haram commander.

Video footages and pictures of the operation which were shared on social media showed corpses of suspected terrorists littering the floor with hundreds of assorted gun lumped together.
It also showed a suspect partly covered in blood alleged to be a top commander who was arrested while fleeing through one of the bunkers.

Hours after the victories of the Chadian armed forces went viral, Shekau released an audio message where he appealed to his fighters to stand firm.

Shekau who spoke in Hausa was translated to have said: “People of Chad, leave us alone; this operation is not approved by the Qur’an. It is not the will of the Prophet Muhammed but if you want to continue, God will help us too because he is bigger than you. To my fighters, take heart. It is I, Abubakar Shekau, your leader.”