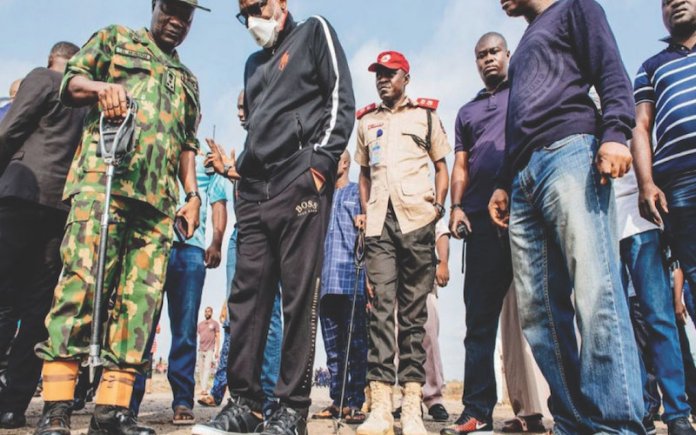 The recent explosion in communities near Akure, the Ondo State capital, has continued to generate controversies like a similar one in the past, writes James Sowole

Like in many incidences, the early morning explosion that rocked Eleyowo/Iluabo communities in the suburb of Akure, Ondo State capital on Saturday, March 28, 2020 came with controversies caused by stereotypical nature of many Nigerians that truth could never come from the relevant authorities.

The explosion, which inflicted injuries on no fewer than 13 persons and caused destruction of not less than 70 buildings including churches and schools with many up to the foundation level, created a big crater that cut the ever-busy Akure-Owo Highway into two.
The heavy sound that came with the explosion, affecting the ceilings of houses that were kilometers away from the site of the blast, made many people, no matter how informed, to conclude that it was a serious matter.

As soon as it was morning proper, several uncomplimentary comments bordering on the security situation in the country began to fly around against the federal government.

Self-appointed “investigators” were quick to conclude that Boko Haram perpetrated the act within few hours after the explosion.
As expected, men and officers of all security agencies including the Army had stormed the site for on-the-spot assignments.
Based on the information at its disposal, the Commissioner of Police in the state, Mr Undie Adie, whose men had been at the site shortly after the explosion, addressed journalists on the possible cause of the explosion.

Adie said it occurred when a truck conveying explosives from Ibadan, Oyo State to Edo State developed fault and caused the blast that caused destruction of such magnitude.
The police position was also reechoed by Governor Oluwarotimi Akeredolu, who was on site with his deputy, Agboolla Ajayi and some of his aides.

The police further claimed that the explosives had been legally moved and the truck escorted by security officers, whose expertise saved what could have resulted in heavy casualties.
However, the explanation of the police was not taken hook, line and sinker by some stakeholders, who said further and serious investigations must be carried out.

A foremost pan Yoruba socio-political group, Afenifere, in a statement by its Publicity Secretary, Yinka Odumakin said though it had nothing to contradict the account of the police, it demanded an inquiry into this disaster in accordance with Ordinance and Fiream Acts to be able to determine the type of ordinances that exploded.
“The inquiry should be able to ascertain the following: the identities of those transporting the ordinances; the origin of the ordinances; who assigned the escorting policemen and under what circumstance; and where was the destination of the Improvised Explosive Devices,” it said.

The organisation also expressed dismay on the rate and frequency of explosion in the Southwest region of the country, saying, “While we wait for answers, we must express our displeasure with the rate of explosions in Yorubaland in recent time. First was the blast in Ekiti State in early February with investigation blaming it on ‘human error’.

“Till date we don’t know the owners of the articulated vehicles found on the scene of the Lagos explosion while the number of casualties and level of suggested damage done to Catholic owned Bethlehem School suggested deliberate targeting,” Afenifere said.
Sharing Afenifere’s position, the Are Ona Kakanfo of Yorubaland, Gani Adams, also alleged that the recent three blasts, which occurred in three states in the Southwest, were beyond ordinary blasts, contrary to the claim by government.
Adams, in a statement, claimed that the Akure explosion was not an ordinary blast, but a suspected bomb blast, which must be duly investigated.

“It’s unfortunate that such incidences are coming at this trying period of coronavirus across the globe,” he said, emphasising that, investigation at his disposal had it that those behind the bomb blasts are now targeting other Southwest States hence the need for all Governors and indigenes to be at alert.
“We are not convinced that all these are ordinary blasts, but a bomb and therefore, it is important and necessary for government to carry out proactive investigation on these incidents, which occurred in a spate of three weeks in Lagos, Ekiti and Ondo States,” Adams declared.

While buttressing his claim with the Lagos blast, Adams said from records, a pipeline fire is expected to burn houses, and not uprooting houses from foundation as it occurred in Lagos, adding that, in view of that, it was beyond pipeline burst, but bomb blast.
He also posited that the Ekiti incident was of same pattern, which should not be attributed to ordinary blast, stressing that the incidences are becoming rampant in Southwest, and therefore, the government should not fold its arm, before the situation gets out of hand.

“I was at the Lagos incident, and I am not convinced that it’s ordinary pipeline fire. From history, if there is pipeline incident, fire will only consume buildings, destroy properties and not pulling down buildings to its foundation. Also, on the Ondo State incident, we are not convinced by the submission of Commissioner of Police.
“Southwest Governors should be vigilant. Information at our disposal has it that, other Southwest states are the next target. Federal government should diligently investigate the incidences,” Adams declared.

Another major controversy that greeted the Akure explosion was on cause of the incident, which they described as natural phenomenon. Some experts led by a Professor of Geophysics and Earthquake Engineering at Obafemi Awolowo University, Ile Ife, Adepelumi Adekunle, said the explosion was caused by a giant rock from space known as meteors.
A meteor is what happens when a meteoroid – a small piece of an asteroid – burns up upon entering earth’s atmosphere, creating a streak of light in the sky.

The expert said the meteors impacted the location from “an angle of 43 degrees”.
Contradicting the explanation of the governor and the police, Adekunle said there was no evidence of a buried vehicle, buried ordinance or explosives from the site, and that “foreign rocks and strange metallic objects” were found within the crater created.
“My Research group carried out a detailed analysis of the impact site. A circular impact crater with 21m diameter and 7.8m depth was found, which suggests a natural phenomenal.

“Water was found oozing out from the edges of the crater. A preliminary insitu vibration, noise, seismicity, water analysis, radioactivity studies, rock and soil investigation were carried out.
“Our findings suggest that the impact of the blasting covers 1km radius of the surroundings of the crater. No evidence of fire or Burning of anything was found within the vicinity.

“No evidence of radioactivity radiation was found within the crater and immediate vicinity. The field evidence point to a conclusion that a meteoric from an asteroid belt that travels at a great speed from space impacted the location at an angle of 43 degrees created an ejecta at South-Western part.”

He also said a crack opening that vary in thickness from 3mm to 4 metres occurred on the wall of most of the buildings in the area, “but not at the base of the buildings”.
Backing the claim of the experts, the National Space Research and Development Agency (NASRDA), said the blast could be a natural phenomenon of a suspected fall of a meteoric from an asteroid belt on great speed from space.

Guns and Killings in Schools, Again