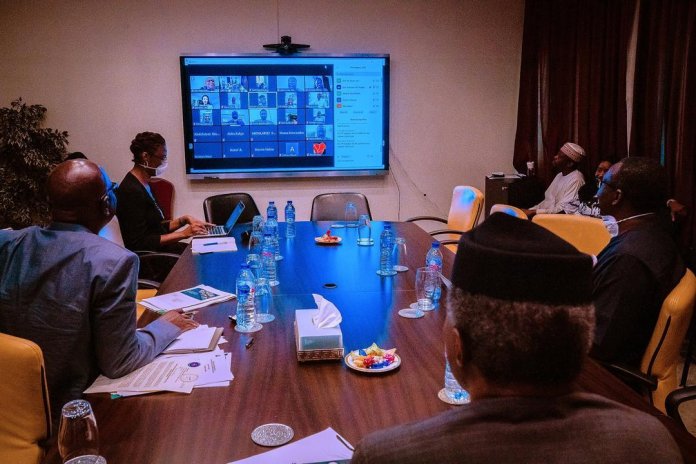 In the midst of what is increasingly becoming a global coronavirus lockdown, governments’ operations and private businesses are being affected across the world as isolation and social distancing have become the order of the day.

But it would seem Nigerians are leading in adopting technology to beat the situation which ordinarily would have grounded operations of governments and businesses.

In Nigeria, championing this innovation is Nigeria’s Vice President Yemi Osinbajo who in the last couple of weeks have been holding his meetings and some public engagements through videoconferencing.

For instance, checks reveal that the Vice President as head of the National Economic Council held a meeting with eight governors and some ministers of the Federal Government through videoconferencing. The meeting would have otherwise been impossible since the governors could not fly into Abuja with the airspace and land borders also shut.

Besides this meeting, the VP has also held other meetings using technology to beat the shutdown and comply with social distancing at the same time. He also participated in a Google Hangout in Abuja on Monday where young technology innovators across the country discussed solutions, ideas and sharing public information regarding the COVID-19 pandemic and its attendant implications.

Besides the VP and the governors, another international public figure known to hold meetings via videoconferencing this week is the British Prime Minister Boris Johnson.

And this innovation of the vice president is not going without some recognition. For improvising various means to beat the Coronavirus pandemic, the Nigerian Young Tech Professionals based in the United Kingdom have commended the Vice President of Nigeria for being a model to other world leaders and captains of industry by holding a video conference from his office.

The Secretary of the group, Chinedu Ogbonna, said: ” the Vice – President has shown that he can improvise and make things work in any situation using technology. He took the lead by being a model to other world leaders, and they now take a cue from the brilliant idea at this critical moment of the pandemic outbreak”.

The group said it is however not surprised because it’s the same VP who has popularize the use of teleprompters for public speeches and the use of electronic tablets to take note at meetings instead of paper notebooks.

Besides holding meetings in his office via video conferencing while on self-Isolation in accordance to the Nigeria Center for Disease Control (NCDC) protocols, the Vice President has also been worshipping online for the past two Sundays as the Aso Villa Chapel streams the service online with less than 10 people including the Chapel Chaplain and few others on ground at the Villa Chapel.

Nigerians at home also applauded VP Osinbajo for taking the lead in the support of Nigerian tech professionals and the use of tech while adhering the Covid-19 pandemic rules.

@Cbngov Akin posted on twitter how Osinbajo held the online meeting, while the Lagos State Government and Boris Johnson, the Prime Minister of Britain followed suit.

In response, @Ibmojotu99 wrote: “Always an innovative leader he made it look so easy and now the world follows but I can’t help but imagine if it was The UK prime minister that did it first, wailers would label anyone after copycat”

Adewale Adegbola: “Osinbajo has never disappointed, he is so current with latest tech and he has applied them to his everyday activities so brilliantly”.

On the contrary, Dwight Shrute added: “Someone said all these small companies have been doing it since since, but our own just started. The hatred sent ehnnn. Ocho ga.”