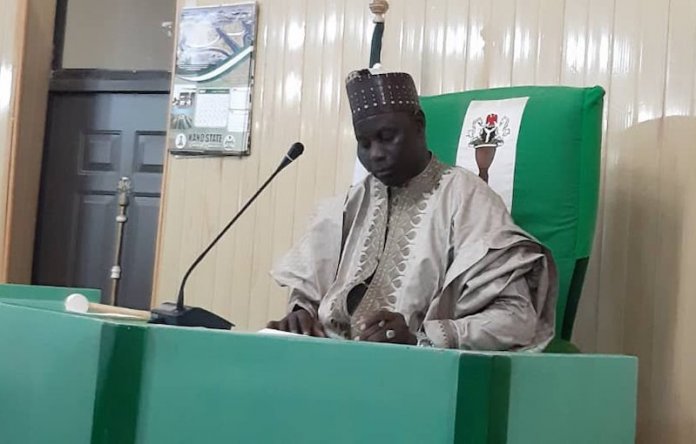 Peter Uzoho in Lagos and Ibrahim Shuaibu in Kano

The Kano State House of Assembly yesterday suspended five lawmakers for six months over an attempt by them to stop the presentation of the report of the investigation of the former Emir of Kano, Alhaji Muhammadu Sanusi II, which caused a rowdy session in the house last week.

The House Speaker, Hon. Abdulazeez Gafasa, announced the suspension of the members at the resumption of sitting, saying they were suspended for misconduct and violation of the rules of the house.

The suspension came just as the Governor of Nasarawa State, Mr. Abdullahi Sule, expressed shock over the removal of the former emir and his subsequent banishment to Nasarawa State, saying that he had no prior knowledge of the plot to dethrone him.

“The five members were suspended for violating the rules of the house especially Order IV Sub 4 a, b, d, and e; they disrupted the sittings of the House and prevented proceedings from going on.

“They behaved violently and even attempted to snatch away the mace in a clear attempt to sabotage the sitting of the house,” Gafasa said.

At penultimate Monday’s sitting of the House, some members had attempted to disrupt the sitting.

Their action followed an attempt by the chairman of an ad-hoc committee constituted to investigate the former emir to present its report.

However, when the legislators sensed a move by the committee Chairman and the Deputy Speaker, Alhaji Hamisu Chidari, to read the report of the committee two days ahead of the deadline for the presentation of the report, a member representing Dala Constituency, Alhaji Hussaini Lawal, rejected the attempt.

The committee’s report was said to have recommended the dethronement of the former emir.

Other PDP members and some APC legislators also protested and rejected the attempt to read the report, which caused the fracas.

Meanwhile, Sule has expressed shock over the removal of the former emir and his subsequent banishment, saying that he did not have prior knowledge of the plot to dethrone him.

The governor said though he knew, like every other person, that both the dethroned emir and the Governor of Kano State, Dr. Abdullahi Ganduje, were having issues but that he did not know the face-off would turn out the way it did.

Sule, during an interactive session with journalists in Lagos, said: “The whole world knows they were having problems, but I did not know it will lead to this.”

The governor, however, explained that he had no idea that the emir had been dethroned until he got a phone call from Ganduje, who informed him that they had dethroned Sanusi and also sought his consent for the emir to be relocated to Nasarawa.

His narration: “When he (Ganduje) told me the emir had been dethroned, I never said a word about it; whether it is good or bad or why.

“Immediately he was dethroned, the governor of Kano called me and said, we have just dethroned the emir and we are thinking about relocating him to Nasarawa; if you will accept him. I said I will be more than happy to accept him.”

On how the message of the banishment of the emir came to him, Sule said: “The message was all over the social media that Emir Sanusi II was dethroned. I did not check because I was busy. But when the Kano governor called, my aid brought the phone to me in a meeting. So, as a senior governor and a second-term governor, and someone I respect, I stepped aside to answer his call.”

Justifying the state’s reticence since the emir’s removal and relocation to Nasarawa, the governor explained: “I think the reason Nasarawa State has been quiet since the saga is because we were not involved with the politics of the removal of the emir himself; what led to the removal of the emir; how he was removed, and the decision to remove him – Nasarawa State was not part of it.”

Sule, who also gave insight into his relationship with the deposed emir and why he decided to accept him in his state, said: “This is a global citizen, highly respected person. When I was the Managing Director of Dangote Group, he was the Group Managing Director of First Bank.

Also explaining why Nasarawa has become a popular destination for deposed emirs in the North, Sule attributed it to the state being one of the border-states between the deep north and the southern part of the country.