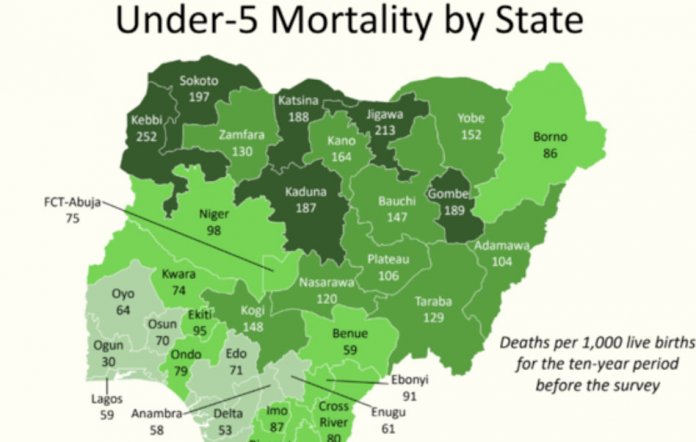 The recently released National Demographic and Health Survey by the Nigerian government has opened another vista of discussion on whether or not the country is pushing towards achieving the Sustainable Development Goals by 2030. Martins Ifijeh writes

It is no longer news that Nigeria has one of the worse health indices globally especially in areas of maternal and child health, immunisation, malnutrition, malaria, communicable diseases, as well as life expectancy rate.

On specifics, Nigeria has been described by the co-Chair of the Bill and Melinda Gates Foundation, Bill Gates in 2018 as one of the most dangerous places to give birth due to the high maternal and child deaths occasioned by pregnancy and child bearing.
Also, according to the Global Hunger Index, Nigeria has one of the worst indices on malnutrition, with at least 2.5 million children said to be malnourished and another 11 million stunted. Same indices are seen in immunisation coverage, malaria rates, among others. It is also obvious in terms of funding, as the Nigerian government still budgets too little for the healthcare of Nigerians.

This, pundits have projected will affect the country’s drive towards achieving Sustainable Development Goal (SDG) set by the United Nations.
However, with the recent release of the NDHS, there seems to be a push by the government and stakeholders to analyse data generated from the exercise and make adjustments in preparation to ensuring the country meets the 2030 SDGs.
Revealing details of the data generated from the NDHS to journalists during a two-day media dialogue on Data Driven Reporting organised by the United Nations Children’s Fund (UNICEF) and the Federal Ministry of Information and Culture held in Rivers State recently, the Monitoring and Evaluation Specialist, UNICEF, Maureen Zubie-Okolo believed the main objective of the NDHS was to provide estimates on fertility levels, marriage, sexual activity, family planning, breastfeeding practices, nutrition, childhood and maternal mortality, maternal and child health, malaria, domestic violence, disability, and female genital mutilation, adding that the information generated was essential for programme managers and policymakers to evaluate and design programmes and strategies for improving the health of Nigerians.

20 Percent of Nigerian Females are Mutilated
According to Zubie-Okolo, the new survey suggests that 20 per cent of Female Genital Mutilation (FGM) occurs in the country, although she emphasized that the overall proportion of women who are circumcised decreased from 25 per cent in 2013 to 20 per cent in 2018.
According to the World Health Organisation (WHO), FGM refers to any procedure that involves partial or total removal of the external genitalia and/or injury to the female genital organs whether for cultural or any other non-therapeutic reasons

She said: “FGM, widely recognised as a violation of human rights, is deeply rooted in beliefs and perceptions over decades and generations. This survey suggests the prevalence of female mutilation seems to be decreasing in Nigeria. By ethnic group, the prevalence is highest among Yoruba women (35 per cent) and lowest among Tiv and Igala women (one per cent each).
“Urban women are more likely than rural women to have experienced FGM (24 per cent and 16 per cent, respectively). The prevalence is highest in the South East (35 per cent) and South West (30 per cent) and lowest in the North East (six per cent)” she added.
Ownership of Insecticide Treated Nets now 61 Percent
While Malaria kills about 400,000 Nigerians every year, the number of ownerships of insecticide treated nets has dropped from 69 per cent in 2015 to 61 per cent in 2018.
Zubie-Okolo said Africa still bears over 80 per cent of the global malaria burden, of which Nigeria accounts for about 25 per cent globally.

She believed the NDHS on malaria will now aid the government and stakeholders in analyzing the reason for the drop in use of insecticide treated nets and then proffer programmes that would improve it.
Malaria a preventable, treatable, and curable disease, is endemic in Nigeria, and has remained the foremost public health problem in the country, taking its greatest toll on children under age five and pregnant women.
Exclusive Breastfeeding in Nigeria is 29 Percent
The NDHS data has shown that only 29 per cent of Nigerian women give their babies of under five months exclusive breastfeeding. Although the data showed that this figure has increased since 2013 from 17 per cent to 29 per cent.
The UNICEF specialist said the percentage of children who had ever been breastfed was 97 per cent in both 2008 and 2018. “The percentage of children who started breastfeeding within one hour of birth has increased by nine percentages; that is from 33 per cent in 2013 to 42 per cent in 2018. The data also showed that the number of babies who start breastfeeding within the first day has increased from 65 per cent to 82 per cent since 2008.”
According to WHO, exclusive breastfeeding for six months prevents infections such as diarrhoea and respiratory illnesses and provides all of the nutrients an infant requires for optimal growth and development

Zubie-Okolo said: “Initiation of breastfeeding within the first hour of life is important for both the mother and the child. The first breast milk contains colostrum, which is highly nutritious and has antibodies that protect the newborn from diseases. Early initiation of breastfeeding also encourages bonding between the mother and her newborn, facilitating the production of regular breast milk.”
She also explained that from the NDHS, the prevalence of stunting has increased from 19 per cent among children less than six months to a peak of 47 per cent among children age 24-35 months, adding that this represent the impact of under-nutrition in the first 1,000 days of life.
Only 67 Percent of Women Receive Ante-natal Care in Nigeria
The recent data also suggests that only 67 per cent of pregnant Nigerian women receive ante natal care, although the figure has improved from 2013 when it was only 58 per cent.
Zubie-Okolo said over the same period, there was a 10 percentage point reduction in the proportion of mothers with no antenatal care. “Women age 20-34 were more likely (69 per cent) to receive antenatal care services from a skilled provider than women in other age groups. Urban women (84 per cent) were more likely than rural women (56per cent) to receive antenatal care from a skilled provider. The proportion of pregnant women who received antenatal care from a skilled provider ranged from 15 per cent in Kebbi to 97 per cent in Imo,” she added.
She explained that health care services during pregnancy and childbirth and after delivery were important for the survival and well-being of both the mother and the infant, adding that this ensures access to a continuum of care for women during the antenatal, intrapartum, and postpartum periods.
31 Percent of Nigerian Children are Vaccinated
The NDHS data has also shown that Nigeria was still lagging behind on vaccination, as only 31 per cent of children between 12 to 23 months received all basic vaccinations. Although, this figure increased from 23 per cent in 2008 to 31 per cent in 2018, which signaled an improvement over the last 10 years.
It also showed that the percentage of children who received none of the basic vaccinations declined from 29 per cent to 19 per cent during the same period.
However, while these trends show improvement, they still fall short of SDG3, for which the target is achieving more than 90 per cent coverage of all basic vaccinations among children age 12-23 months.

Experts believed immunisation coverage was one of the indicators used in monitoring progress toward reductions in child morbidity and mortality, as it is one of the most cost-effective public health interventions
According to WHO, all basic vaccinations for children age 12-23 months include; one dose of BCG vaccine, which protects against tuberculosis, three doses of DPT-containing vaccine, which protects against diphtheria, pertussis (whooping cough), and tetanus, three doses of oral polio vaccine (excluding polio vaccine given at birth), and one dose of measles vaccine.
Public health experts often believe one of the major steps to addressing healthcare issues was to be armed with data on issues of focus. With the Nigerian government now armed with information from the latest NDHS data, it is believed it would help in addressing issues that poses threat to the country achieving SDG by 2030.