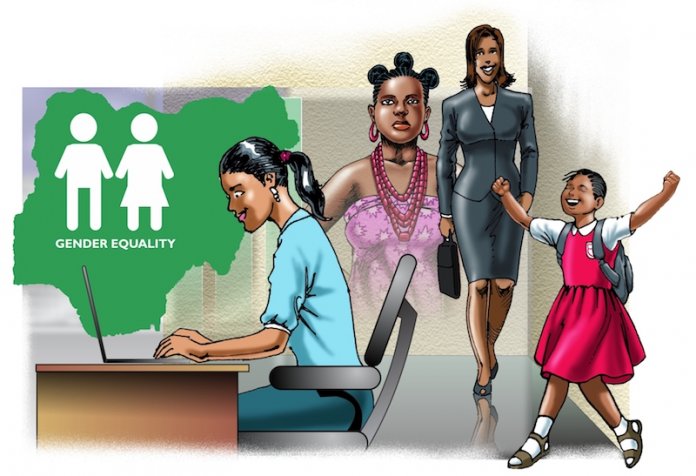 Gender equality is essential for economies and communities to thrive

As women all over the world today mark the International Women’s Day to celebrate their achievements in the last century, critical stakeholders in Nigeria must also come to terms with the fact that our women and girls deserve a better deal from the society. This year’s event coincides with a period professional women are being discriminated against in a warped politics of identity. Some women who are married to men from states other than theirs have been practically rendered ‘stateless’. The non-confirmation of Justice Akon Ikpeme as the substantive Chief Judge by the Cross River State House of Assembly because she is from Akwa Ibom, even when her husband is from Cross River State where she has had her career on the bench, bears eloquent testimony to this.

With #EachForEqual, as the theme for the International Women’s Day this year, the idea is to focus the attention of critical stakeholders on the fact that “gender equality is essential for economies and communities to thrive”. The general notion that women are inferior to men is unsustainable especially because gender equality is not just a human rights issue. It is essential for the achievement of sustainable development and a peaceful, prosperous world. Therefore, circumscribing access to opportunities that ultimately empowers women who make up about 50 per cent of the Nigerian population is counterproductive. But for change to happen, it would take collective global action. The glass ceiling, according to the United Nations Development Programme (UNDP) “is perhaps most apparent for women in areas that challenge ‘hard power’. In politics, men and women vote at similar rates, but less than one quarter of parliamentary seats globally are held by women. This isn’t just a gender gap. It’s a power gap.”

Because the Nigerian society is patriarchal, men dominate while women are subordinated in practically all areas of our national life. Nothing perhaps speaks to the gender imbalance in Nigeria than the number of representation in the various arms of government, both in the states and at the federal level. Since the commencement of the Fourth Republic two decades ago (1999), the number of elected women in both the executive and legislative arms of government is abysmally low. At the level of the executive, no woman has ever been elected the president of the country or governor of any state. At the legislative level both at federal and the component states, the number of elected legislators is less than five per cent.

On a day such as this, therefore, we must join our women as they continue to fight all forms of discrimination. It makes no sense to exclude half of our population from maximising their potential simply for archaic and oppressive reasons. At election periods, political parties set guidelines for prospective aspirants that are clearly against the interest of ambitious female members. Aside the huge financial demands, political meetings are almost always scheduled to hold at night which makes it a disincentive for women, given the cultural environment under which we operate.

There are all forms of discrimination against women in our country for which we must begin to proffer different multi-sectoral and coordinated solutions. These include adopting, strengthening and implementing legislations that will promote gender balance in all aspects of our national life. However, even beyond any proposed legislations, there are clear and definite constitutional provisions that entrench the rights of women that are being observed in the breach. Unfortunately, reminding some Nigerians of these fundamental guarantees seems futile while the people expected to defend or promote those rights hardly care. If we must include our women in the governing process, dealing with these issues is very important.

As Nigeria therefore joins the rest of the world to mark the International Women’s Day, we must also celebrate the social, economic, cultural and political achievements of our mothers, sisters and daughters. But perhaps much more important is that the men must see gender balance as a universal challenge. We must also begin to create an atmosphere that assures women in Nigeria that they are not in any way inferior to our men.

Quote
As Nigeria joins the rest of the world to mark the International Women’s Day, we must also celebrate the social, economic, cultural and political achievements of our mothers, sisters and daughters. But perhaps much more important is that the men must see gender balance as a universal challenge