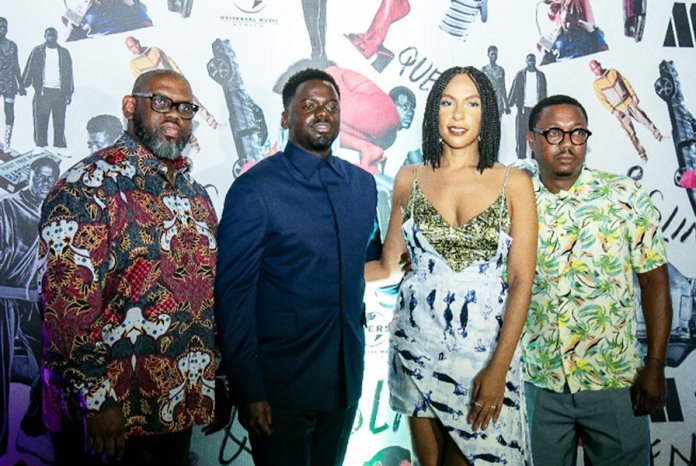 The highly anticipated drama-thriller, Queen and Slim, premiered in Filmhouse Cinemas, Lekki, Lagos over the weekend. The event, hosted by UMG Nigeria in conjunction with Fimhouse Cinemas, welcomed A-listers including English actor, Oscar nominee and lead actor of the movie, Daniel Kaluuya, as well as GRAMMY®-winning director and director of the movie, Melina Matsoukas.

The premiere, which occurred on February 15, included a red-carpet event and a private screening with Nigerian and Global entertainment powerhouses in attendance including Bankole Wellington, Adesua Etomi-Wellington, Dr. Sid, Uti Nwachukwu, Eku Edeawor, Mo Cheddah, Osas Ighodaro, amongst others.

The star guests Daniel Kaluuya and Melina Matsoukas, were also joined by, Sipho Dlamini, Managing Director of Universal Music South Africa and sub-Saharan Africa and Marc Byers, General Manager of Motown Records. For the promotion of the movie fondly described as “a love story to Africa ”, the powerful duo, Daniel and Melina, have embarked on an African world-tour, visiting other African countries including South Africa amongst others and now, Nigeria.

Addressing the guests at the event, Managing Director of Universal Music South Africa and sub-Saharan Africa, Sipho Dlamini, expressed gratitude for the support received saying: “Handling a project this delicate is not an easy one and would not have been possible without everyone who has shown support, either by telling people about it, honoring our invitation to this exclusive screening or generally spreading awareness about the movie. We are so glad to finally be sharing the result of this journey with you and hope it leaves a remarkable impact on how you currently perceive life. Thank you all for showing up and showing out.”

Group Chief Executive Officer of Filmhouse Cinemas, Kene Okwuosa said: “It is an honor to partner with Universal Music Africa, Daniel And Melina and the entire team on bringing Queen and Slim to Nigeria. It is a powerful story that handles its themes of resistance and joy with as much care and entanglement. “

Queen & Slim, a Universal Pictures production, is a powerful, consciousness-raising love story that confronts the staggering human toll of racism and the life-shattering price of violence. The film which was directed by Grammy®-winning director Melina Matsoukas and written by Emmy®-winning writer Lena Waithe, tells an emotional story of a black man (Daniel Kaluuya) and a black woman (Jodie Turner-Smith), whose first date takes a dramatic turn of events that affects their lives in unthinkable ways.

Embedded in the movie were the overarching message of love, grief, survival, pain and fear. The movie also was one of discovery, desperation and humanity, also strongly represented in its soundtrack. Showcasing the range of talent across Black artists with a compelling blend of genres, the soundtrack features a 16-song EP with tracks by Burna Boy, Ms. Lauryn Hill, Lil Baby, Vince Staples featuring 6lack X Mereba, Tiana Major 9 & EARTHGANG, Coast Contra featuring BJ The Chicago Kid and Syd, plus classic songs by Roy Ayers, Bilal, Mike Jones and others.

Now available nationwide, you can watch Queen & Slim at any Cinema near you.