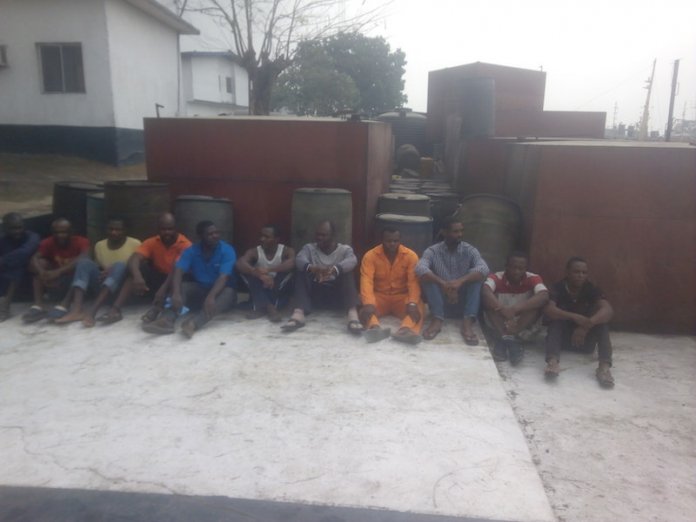 The operations, which was carried out between January 15 and February 12 this year, also led to the arrest of three sea going vessels namely MT Nely, MT Madam Esther and MT De-Praise as well as a wooden boat and a badge.

According to sources, the patrol teams of NNS Delta first observed that the Automatic Identification System (AIS) of the vessels were switched off, which attracted suspicion that triggered the curiousity of the naval operatives.

It was learnt that on boarding the vessels, the navy personnel discovered that they were laden with crude oil, AGO also known as diesel amongst others without valid documents from the Nigerian National Petroleum Corporation (NNPC) and the Department of Petroleum Resources (DPR).

Handing over the suspected oil thieves to the Economic and Financial Crimes Commission (EFCC) officials for further investigations and prosecution on Monday, the Commander of NNS Delta, Rear Admiral Ibrahim Dewu, who was represented by the Executive Officer, NNS Delta, Navy Captain Anthony Victor Kujoh, confirmed that the suspects were arrested at different locations off Escravos rivers in the past three weeks.

He also confirmed that substances suspected to be illegally produced AGO and suspected stolen crude oil were found aboard the vessels while the crew members could not produce any valid documents from the regulating agencies authorising lifting of the products.

Dewu therefore warned criminals to stay clear of the area of responsibilities of NNS Delta noting that Nigerian Navy was poised to block all escape routes to criminals in the Nigerian maritime environment.

A Principal Detective Suprintendent of EFCC, Benin Zonal office, Richard Ogberagha, while receiving the suspects and vessels, said investigations had already commenced into the circumstances surrounding the vessels, their crew members and the products found on them.

“We have just taken over the vessels, MT Neli, MT De-Praise and MT Madam Esther with a Cotonou boat. We have also taken over the crew members. So we have already commenced investigations by working with officials of DPR to start sounding of the vessels to determine the quality of the products. Samples will be taken and quality analysis will be done.

“We are going to interview the suspects and find out the extent of their involvement and how they came about the products. We will brief you subsequently on the development as the investigations progress”, he assured.

The handing over ceremony last Monday took place barely five days after another vessel, MT Fendercare 1 was handed over to the officials of the Nigeria Maritime Administration and Safety Agency (NIMASA) having been caught under similar circumstances but without any stolen oil products.