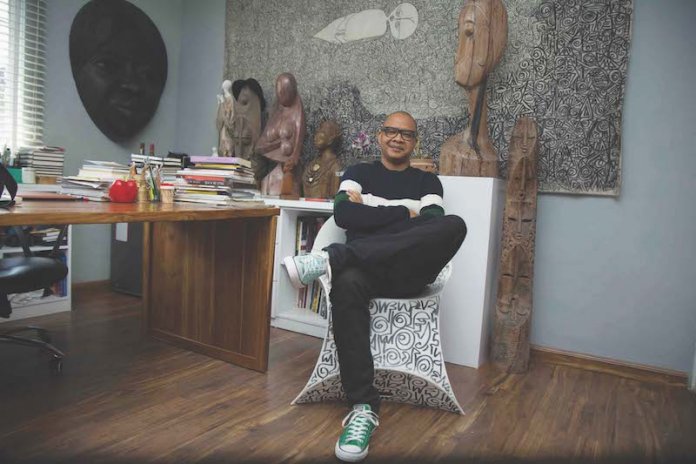 It is a warm Saturday afternoon and Victor Ehikhamenor, artist, writer and photographer is smiling.
His round face is cherubic as walks and works the room, meandering through the crowd of people who have turned up in large numbers on the opening day of his latest solo exhibition at Rele Gallery. The exhibition is proceeding under the theme – Day Dream Esoterica.

It is a curious crowd and not the usual you would have found at an art exhibition, say 10 years ago, when art patrons were mostly older men and women with money to spare. The crowd at Rele is made up of younger folk, millennials and not, young men and women on the up united by a growing appreciation of the arts.

The art ecosystem has changed and call me biased, but it has to do in large part with Victor Ehikhamenor as well as a few other factors that can be traced to him. But we will get to that in a moment.

Born at the tail end of the civil war on Thursday February 19, 1970 in Udomi-Uwessan in what was the old Mid-west region, Victor Ehikhamenor graduated with an MA from Ambrose Alli University, Ekpoma. Like most young Nigerian men, he gravitated to Lagos where he worked briefly at a finance house before migrating across the seas to America where he would earn two more degrees; an MSc in Information System as well as an MFA, both from the University of Maryland.

Largely self-taught, Mr. Ehikhamenor caught the art bug while still a child in his Uwessan village where the mud walls of his large family and neighbours provided him his first canvas. He was impressed by the aesthetic designs women left on their mud walls and would many years later, as he gained knowledge of uli and nsibidi, evolve an aesthetic all his own.
His 2011 Entrances & Exits: In Search of Not Forgetting, solo exhibition at CCA, Lagos with the “Door” series was a fitting homage to those early beginnings.

Today, his works are set apart by his own signature iconology and icononography which I have tried to sum up thus in a previous essay – “Victor Ehikhamenor’s works are usually hard to describe yet very easy to identify. They, most often, could be monochromatic red and yellow or black and grey, feature a burst of bright colours, be avant-gardist in his use of found objects or be beautifully minimalist as in his best-selling perforation pieces but no matter how the final work is realised what stands out are Victor Ehikhamenor’s signature stylised lines, concentric circles, cryptic images and doodles which seem to have borrowed from uli and nsibidi without being fully any of those. They are patently his and have become defining symbols of a rapidly growing and expanding body of work.”

Victor Ehikhamenor lived in America for 15 long years during which he worked at the National Geographic, published a collection of poems, Sordid Rituals in 2002 and tried to carve a niche for himself as a photographer and artist. He was constantly seeking the new, eager to fashion out a fresh aesthetic, a brand new visual language.

There was some success in the DC area but it was a work in progress.
In 2008, Mr. Ehikhamenor made the reverse journey back home. There was a job waiting as Design Director at the defunct Next newspapers. Before Next, there had been two solo exhibitions – Labyrinth of Memories at Didi Museum, Lagos in 2007 and Rocks & Roses at Victoria Crown Plaza, Lagos in the same year.

But it was his 2009 exhibition Mirrors and Mirages at Terra Kulture Gallery that signaled his final return and signposted his emergence as a contemporary artist of note in Nigeria.

He was coming into a crowded space with already established artists like Rom Isichei, Peju Alatishe, Kainebi Osahenye, Duke Asidere, Olu Ajayi, Ndidi Dike and many more. But he quickly made his mark, his unique style connecting viscerally with his audience of the young and hip as well as the well-heeled.

Victor Ehikhamenor embraced social media long before his peers did and in so doing cultivated an audience made up of a younger demographic. He was also quick to take his art out of the gilded confines of galleries and museums into the pop culture space. His art works adorned tee shirts, made it to the runway in a bold collaboration with Ituen Basi, and were used on mugs.

But the biggest cross pollination happened, it might seem, inadvertently, with members of a different tribe – writers. Victor Ehikhamenor holds the record as the artist who has produced the most book covers in the world. His book covers are coveted and have helped to expand the universe of his influence. He has produced book covers for writers like Chimamanda Ngozi Adichie, Chika Unigwe, Helon Habila, Ikeogu Oke, Dami Ajayi, Logan February and for institutions like Cassava Republic, Rhodes University, New Internationalist Publishers, UK, Hodders Publishers, UK, and the Caine Prize for African Writing amongst others.

By marrying art with literature and pop culture and social media, Mr. Ehikhamenor extended his audience base and cultivated a fresh new following making him one of the most recognizable contemporary artists in Nigeria today.
But it is not all about making art and closing deals. As the years roll by, Victor Ehikhamenor has also begun to cast an eye on his legacy and this has manifested in two ways, giving back and speaking out.

In February 2018, Ehikhamenor opened Angels and Muse, described as “a multi-modal co-working space in Lagos” which also doubles as a discounted residential space for creatives. Sitting pat in the heart of Ikoyi, Lagos, Angel and Muse contains a “multidisciplinary room available for workshops, trainings, book readings, experimental or conceptual art exhibitions, etc.”

His activism has manifested in an ongoing call for artistic repatriation of African works stolen by the colonialists. In May 2017 while participating at the Venice Biennale, Mr. Ehikhamenor called attention to what he describes as Damien Hirst’s “cultural appropriation of Nigerian Yoruba art” in Hirst’s exhibition called Treasures From the Wreck of the Unbelievable and which featured a variety of sculptures meant to be viewed as debris rescued from a shipwreck. But it turned out that one of the displayed artefacts was actually a copy of “Ori Olokun” a famous Ife bronze piece from the 14th century.

Since that public disclaimer, Victor Ehikhamenor has become increasingly vocal in demanding recompense. His most recent intervention was a January 2020 New York Times Op-ed with the caption – “Give Us Back What Our Ancestors Made.”

Back fully in Nigeria for over a decade, his works have over the past ten years, evinced a growth defined by a constant reinvention of his process and oeuvre, one that has seen oil on canvas give way to murals before morphing into large scale installations or becoming sculpture and then we have moved from the perforation series to the use of rosaries and a full scale return to oil on canvas in Day Dream Esoterica, his last solo exhibition. Despite the transformations, one thing has remained constant; his distinct iconography, an easily recognisable visual language.

His works adorn walls in private and public collections from Lagos to London and from Cape Town to Casablanca. He has taken part in over 50 solo and group shows across the world from Venice to Indonesia, London to Dakar, and Berlin to The Hamptons.

Victor Ehikhamenor was featured artist at the Indonesian Biennale at the Jogja National Museum in 2016, the Dakart Biennale Curated by Simon Njami in 2016, the Venice Biennale in 2017 and most recently the Stellenbosch Triennale, 2020
He has attended art residencies at the Rockefeller Foundation Bellagio Center Africa in Residency in 2016, Art Dubai Residency in 2018, Civitella Ranieri in 2018 amongst others.

As Victor Ehikhamenor turns 50, his art will no doubt be defined by that abiding principle – “newness” as he continues to redefine his never-ending exploration of the binaries of the traditional and the modern in a tongue made eloquent by his unique style and talent.
Later that evening at Rele, as the crowd thinned he allowed himself indulge in a sober moment of self-reflection – “From the moment I started my practice here and in the US, I was looking for something distinct, something fresh and new.”
That search will definitely continue into his next half century.