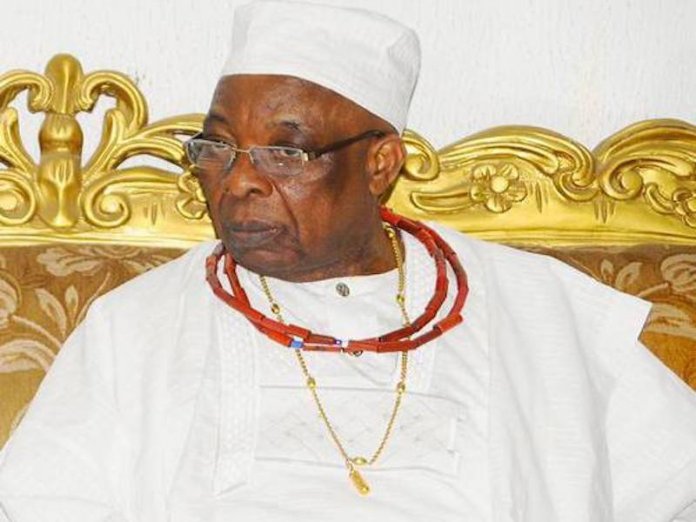 Owa Obokun Adimula Oba, Dr. Adekunle Aromolaran, is one of the few most respected monarchs in the Yoruba land.
He is well revered and accorded a high level of regards owing to his widely acknowledged native wisdom and intelligence.

However, if the information gathered by Society Watch is anything to go by, the octogenarian monarch might be in trouble, as some of his subjects, led by Dr. Oyekanmi Ogedengbe, Obanla of Ijeshaland, are ready to have a showdown with him.

He is alleged to have betrayed the deities or refused to follow the protocols of appeasing the deities.
In his account, the Obanla of Ijeshaland, and the vice-chairman, Ijesha traditional council, described the Owa-obokun as arrogant and proud, adding that he has also shown blatant disregard to a government institution.

It was also alleged that the Ijeshaland might not witness any meaningful progress if the Owa-obokun is not called to order.
According to the source, the monarch is allegedly chasing away development from the land based on his alleged demand from investors.

It was also gathered that when the former governor of Osun State Rauf Aregbesola instituted a panel of inquiry to touch on several issues pertaining to the complaints, traditional stool’s anomalies and various misdemeanors of Owa-obokun, he allegedly boasted and proclaimed that the report would never see the light of day.

Our source revealed that if the state government fails to wade in and nip the issues in the bud, it could escalate into a full-blown menace.
“Dr. Oyekanmi Ogedengbe alarmed that the Owa-obokun needs to play a responsible leadership role in uniting all Ijesha indigenes for progress rather than champion an anti-progress agenda,” the source added.