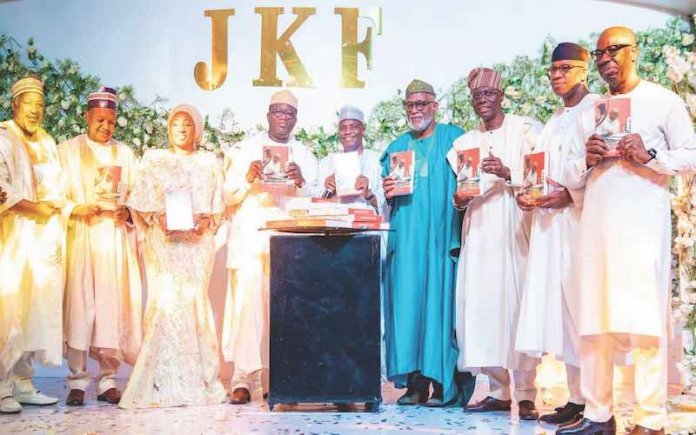 Ekiti State Governor, Kayode Fayemi isn’t just a man of the moment, the future also contemplates him. The fact of this assertion was however confirmed last week, when he marked his 55th birthday, writes Shola Oyeyipo

First is the air around him. It smells a curious yet unfathomable future. That much you could figure in his many quick gazes. From the conservative field of academic intellectuals to the attention-hugging political turf, Ekiti State Governor, Kayode Fayemi, has coursed through such incredible trajectory, that turning out to be the issue he is today, both at the regional and national politics, makes him a compelling study in the power game.

Endowed with the gift of the garb, yet, Fayemi is never quick to speak. His capacity to listen and give appropriate response is ever so fascinating. His ability to network amongst people of all classes without weighing too much on any side speaks to an uncommon leadership trait, which eases balancing without compromising principles and philosophy.

Currently boasting a delicate but enviable place in the body polity both as governor of Ekiti State and chairman of Nigeria Governors’ Forum (NGF), Fayemi is not oblivious of this rather powerful position and has continued to exercise such with utmost caution and discretion.

It is no wonder therefore that many reckon he commands some presidential demeanour. Although that’s one topic Fayemi detests to feature especially, given the timing, unfortunately, opinions about his capacity and ability have not waned in this respect, coming at a time a lot of the people are clamouring for a 21st century leader as successor to the current administration of President Muhammadu Buhari in 2023.

His many interventions in issues both at the public and the private levels, had also confirmed his emotional intelligence as a leader, who could dispassionately analyse situations beyond the immediate.

From his intervention in the crisis between Governor Godwin Obaseki of Edo State and his predecessor and National Chairman of the All Progressives Congress (APC), Adams Oshiomhole, to the one between Kano State, Abdullahi Ganduje and the Emir of the state, Mohammed Sanusi II, Fayemi has displayed one thing: discretion and maturity, and in time, which is always of the essence.

What about the eventual success of the Western Nigeria Security Network (WNSN) codenamed ‘Operation Amotekun’? But for determination and the ability to defend this initiative, Amotekun was conditioned to fail. But he, in cooperation with his colleagues in the Southwest, pulled it off. Today, Amotekun is more or less a template that other parts of the country are itching to adopt.

Thus, when initiatives such as these are factored into sincere considerations, the tendency to want to forgive those pushing him forward as a presidential material is understandable. He is strategic, calculated, intentional, candid and unmistaken in all of his approaches.
In fact, it is the belief of many that the four years he was out of office as governor had been judiciously deployed to some critical reviews, which might be responsible for the new irrepressible Fayemi.

Whilst he was not in anyway in the lurch during those four years as he was then the Minister of Mines and Steel development, he came back stronger. Indeed, he typified the saying that “the bigger the setback, the bigger the comeback”.
However, if anyone had doubted Fayemi’s current and enviable place as the man of the moment, his 55th birthday celebration in Ado-Ekiti, the state capital last week put paid to any such contemplation.

The programme of activities, which commenced with a Jumat service on Friday, February 7, at the Central Mosque, Ado Ekiti, followed up with a Novelty Football match the next day, Saturday, February 8, at the Oluyemi Kayode Stadium, also in Ado-Ekiti and later in the evening of Saturday, it was rounded off with a command performance titled Ifajuyigbe held at Adetiloye hall in memory of the late Col. Adekunle Fajuyi.
Sunday, which was the D-Day started with a thanksgiving mass at the Government House Chapel, which was immediately taken over by a roundtable and book launch presentation before a modest reception ended the day.

Other prominent guests were the Archbishop of Ondo Anglican Diocese, Bishop Christopher Omotunde, Bishop of Ekiti Catholic Diocese, Bishop Felix Ajakaiye, as well as a horde of traditional leaders in the state led by their chairman, Oba Ajibade Alabi.
Thus, when speaking during the thanksgiving service and Fayemi described himself as a beneficiary of God’s generosity, not many could contest his submission particularly, when he promised to remain committed to God and continue to focus on improving the society.

“They had lost two children in quick succession and that was why they named me Folorunso. My parents thought they should just wait and see the outcome and today, I am celebrating 55, I give God all the glory.
“I have been a beneficiary of God’s generosity, because for me, challenges are opportunities to make a difference in the lives of human beings. So, if you allow me, let us just focus on the work of God to improve the conditions of our society and country. A life without service to God and humanity is not a life worth living.

“All of the challenges will not go away overnight but you should believe that God is the one that can always use those of us that have been given grace to lead, to be of service to all his children, we have no choice than to continue to commit ourselves to the Service of God,” Fayemi said.
It is therefore understandable why Fayemi appears to be an interesting puzzle that the political class might struggle to solve for a long time to come. You never see him coming and when he eventually arrives, you do not have the capacity to predict what he does or says next.

He is masterfully in charge of his moves and delivers them with logic and precision. He is not your typical politician. With tact, caution and critical thinking, he ponders all of his actions and leaves nothing to chances. And for a man, who has learnt to always build safety into many of his assumptions, he has continued to record minimal or zero mistakes.
Pix: Fayemi, sandwiched by his colleague governors on the occasion of his 55th birthday.jpg