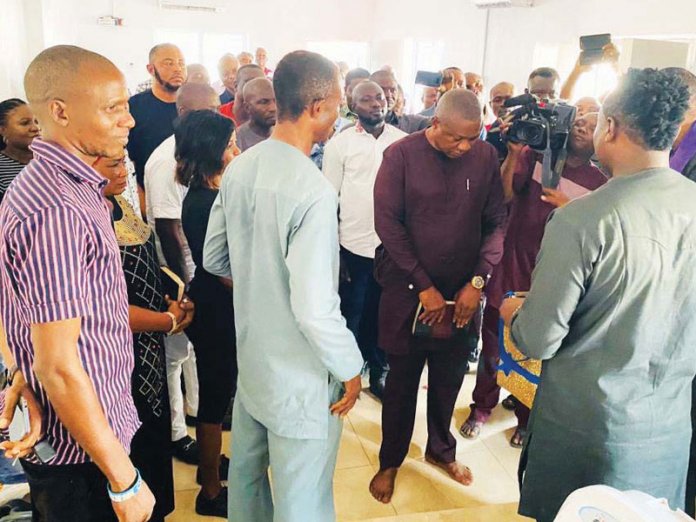 The police are best known for internal warfare, combating crime and maintaining law and order, but certainly not for prayers. Shattering that illusion, the Inspector General of Police Intelligence Response Team, Lagos Annex, recently gathered to pray and worship in a chapel they built, which was ably christened Able God. Chiemelie Ezeobi reports

Globally, maintaining law and order, of which combating crime is key, is the major responsibility of the Nigeria Police. For the Inspector General of Police (IGP) Intelligence Response Team (IRT), Lagos Annex, it is no different. However, they have come to realise where the sustenance comes from; God.

In acknowledgment of God’s faithful works in their job and lives, given that they have not lost any life in the course of carrying out one of the most dangerous jobs on earth-ridding the society of crime and criminals, the unit recently built and dedicated an altar and an over 30-seater chapel in their base in Ikeja, Lagos.

The day it was dedicated, policemen danced and worshipped irrespective of their faith.

At the dedication, one of the beauties witnessed was the presence of IRT Commander, Abba Kyari, a Deputy Commissioner of Police (DCP), who is a devout Muslim. Notwithstanding his faith, he fellowshipped with his men, which is one of the many reasons they adore him and would probably lay their life for him.

It was Kyari who performed the commissioning and while cutting the tape, he said it is good to have the worship centre in addition to the one commissioned last year for those of the other religion.

He said, “If there is a Mosque inside the compound and without a church, it is not complete, because all the personnel of IRT are either Muslims or Christians.”

Thanking the police officers present, the commander expressed his appreciation to those who have worked hard in actualising this dream.

While dedicating the chapel, Command Chaplain Lagos State, Ven SP Ezekiel Ugbotor said: “Today the 14th of February, by coincidence is Valentine’s Day, a day of love, at the same time we are opening our House of God, on behalf of the IGP, DCP Abba Kyari, we are unveiling the plaque of this chapel built by CSP Philip Rieninwa Coordinator IGP-IRT Lagos Annex.

Afterwards in an interview with Rieninwa he said:

“Able God chapel was created by God Almighty because in this annex, IGP IRT , Lagos Annex, God Almighty has been doing exceedingly well here. Our main office is in Abuja, where the Commander, DCP Abba Kyari based. I can stand without fear to state that Lagos State annex has contributed a lot to what IRT is today. The commander himself can confirm it.

“There has been no loss of life since the creation of this annex since a decade of its establishment. We have scaled through in terms of pursing crime: the arrest of Evans in Lagos, the Turkish School students, arrest of Americana, the killing of Owan in Festac, kidnap of Oba of Iba in Lagos, how many can we mention?

“This God is so marvelous in protecting, guiding us as we go out and come in. And this also leads to special recognition and special promotion for the work we are doing. So, we have nothing else to do than to build a place of worship for this wonderful God , for what He has one and what he would yet do. So we decided that church and mosque should be erected here.

“Every morning, we will enter the church and before we go on any operation, such as tracking, or anything, we will hand it to able God. Hence, the name ‘Able God’.”