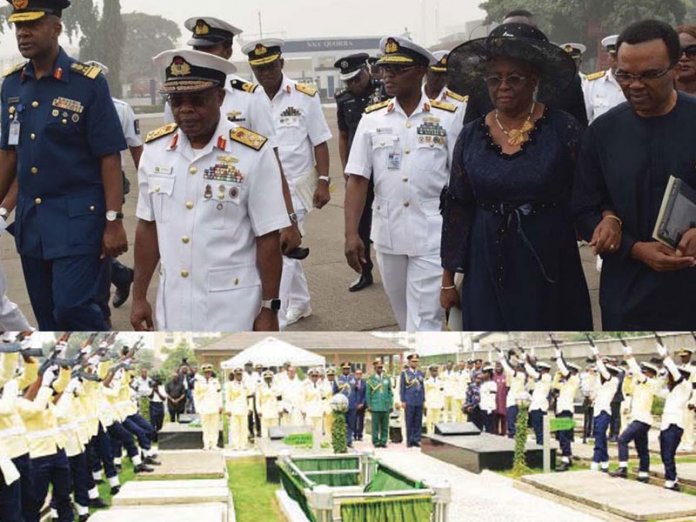 Chiemelie Ezeobi writes that full military honours were given to late Vice Admiral Patrick Koshoni, the former Chief of Naval Staff, as he was laid to rest in Lagos

The death of former Chief of the Naval Staff (CNS), Vice Admiral Patrick Seubo Koshoni (rtd), on January 25, 2020, was announced by the Naval Headquarters. He was the eighth Chief of the Naval Staff, a position he assumed on October 7, 1986. He has since been buried but not without the navy giving him full military honours as he began his journey home.

At the lying-in-state, serving and retired service chiefs, including ratings and civilian staff, joined the bereaved family to converge on the parade ground of the Naval Training Command (NAVTRAC), Apapa to pay their last respects.

The solemn event which lasted about 45 minutes, commenced with a parade and procession that ushered in the white hearse conveying the deceased senior officer.

As the body was lowered on the parade ground, the Chief of the Naval Staff (CNS) Vice Admiral Ibok-Ete Ibas, his predecessors, Admirals Usman Jibrin, Ola Sa’ad Ibrahim, Ishaya Ibrahim and Jubril Ayinla and all other officers present at the gathering all saluted as a mark of respect to the deceased.

A short hymn and prayer for the repose of his soul were sang as the deceased, clad in his Nigerian Navy ceremonial uniform and housed in a white casket was carried into a tent decorated with wreaths where he was laid-in-state.

Although the event was devoid of speeches, some retired officers eulogised the deceased, describing him as a very professional and detribalised officer.

Rear Admiral Kehinde Komolafe (Rtd) who was Aide-De-Camp (ADC) to Koshoni said the deceased was a peaceful man.

“There was peace all around and in him. I cannot really tell how he did it. But he was a man of peace and his type of leadership was simple and peaceful.

That was how he conducted himself throughout. There are a lot of lessons in his life for younger officers. He was very professional, he knew the job he was doing.

“He knew his responsibility and he went after them.

He was committed to his job and had no ulterior motive. He was just committed to ensure the service was on the right track.”

“He was a worthy example in all standards. He has left his footprint on  the sands of time that cannot be erased. The most important thing was that he was absolutely and completely a detribalised Nigerian.”

It started off with the Entrance Hymn: Help, Lord, The Souls and then the Rite at the entrance of the church before the prayer and entrance procession. The Requiem also came before the first reading by Leonardo Koshoni and Responsorial Psalm by the Chief of the Naval Staff, Vice Admiral Ibok Ete Ibas.

Then came the Alleluia Chorus and Gospel Acclamation, before the Gospel Reading and Homily. Prayer of the faithful took place and then the Offertory hymns and prayer over the gifts.

With the songs of farewell, invocations, recessional  hymns and prayers at the grave side, the rites of passage of the late Admiral ended. He was buried at a private vault in Ebony Gardens in Ikoyi.

In his oration at the funeral, the CNS, Vice Admiral Ibok Ete Ibas, said the late Admiral was a thoroughbred naval officer, adding that the former CNS raised the tone of the Nigerian Navy brand.

He said: “He gave it colour, elegance and panache. He particularly made outstanding contributions to the maritime defence of Nigeria through the articulation of the nation’s foremost maritime strategy, the Trident Strategy. His tenure as the Chief of the Naval Staff therefore gave the Nigerian Navy a renewed sense of direction as he led a vibrant team of maritime thinkers that introduced many innovations and transformational initiatives.

“For over 25 years, the Trident Strategy remained the guiding doctrine for Nigeria’s maritime defence and helped to streamline the acquisition of platforms for an appropriate size and shape of the Nigerian Navy until 2012 when it was reviewed and replaced with the Total Spectrum Maritime Strategy.

“His other remarkable achievements as Chief of the Naval Staff include the institutionalisation of the Presidential Fleet Review, Manpower Rationalisation for the service as well as several logistic reforms and morale boosting welfare schemes.

“Above all, Admiral Koshoni bequeathed to the Nigerian Navy an enduring legacy of professionalism, personal and organizational integrity, teamwork, and robust brainstorming sessions through the Chief of Naval Staff’s Annual Conference (CONSAC), which he initiated.

“The CONSAC has continued to serve as a veritable platform for strategic engagement and policy review in the Nigerian Navy. On retirement from service, the indefatigable Admiral was again called to serve as the Chairman National Internal Security Organisation (defunct National Guard). Thereafter, Admiral Koshoni remained a depository of knowledge and continued to serve the nation and the Nigerian Navy in advisory capacity. His military and public service have earned him several notable awards, among which are the Commander of the Order of the Federal Republic, Distinguished Service Star, Meritorious Service 2 Star and the Forces Service Star in recognition of his unblemished service to the Nigerian Navy and the nation in general. He is also a proud recipient of the prestigious appellation of member national institute of Nigeria.

“It is often said that ‘… all are of the dust and all turn to dust again’. Late Vice Admiral Patrick Seubo Koshoni, as it with all mortals bowed to mother earth on 25 January 2020. His death is a great loss not only to his family, his wife Mrs Margaret Aderoju Koshoni, children and grandchildren, but the Nigerian Navy and the nation in general. Admiral Patrick Seubo Koshoni, we love you very dearly but God loves you most. On behalf of the Nigerian Navy family, friends and relations, I pray for the peaceful repose of your soul.

Born in Lagos on 11 April 1943, Vice Admiral Koshoni (rtd) joined the Nigerian Navy on the 11 June 1962 after a secondary school education at St Finbarr’s College, Akoka, Lagos. That same year he started the naval cadetship training at the National Defence Training Academy in India and was commissioned Sub-Lieutenant on 13 July 1964.

Admiral Koshoni (rtd) attended many naval, management and leadership courses and headed many naval and military appointments, committees and task forces. He served the nation meritoriously as the Flag Officer Commanding Western Naval Command and as Honourable Ministers of Health, Transport and Aviation as well as Labour and Productivity. He was a member of the Supreme Military and Federal Executive Councils from January 1984 – August 1985.

During his tenure as the Chief of the Naval Staff, he led initiatives for the articulation of Nigeria’s foremost maritime strategy; the Nigerian Navy Trident Strategy and helped to institutionalise the Presidential Fleet Review, Manpower Rationalization for the Service and the Chief of Naval Staff’s Annual Conference, which has continued to serve as a veritable platform for strategic engagement and policy review.

He is survived by wife, Mrs Margaret Aderoju Koshoni, children and several grandchildren.