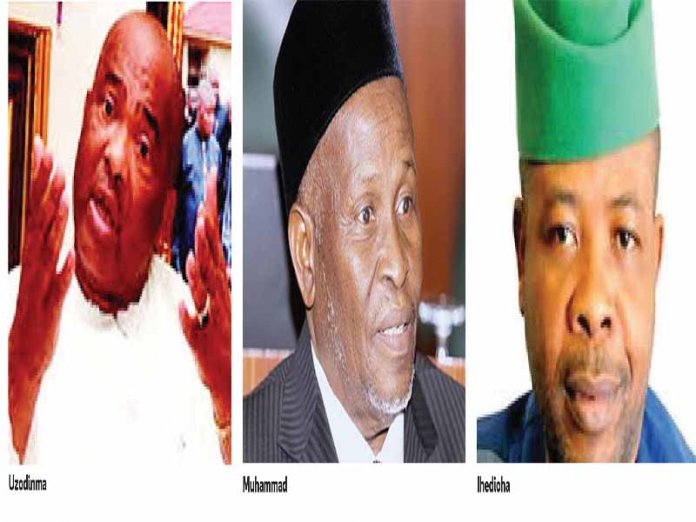 Alexander Enumah, Amby Uneze and Vanessa Obioha write that all eyes are on the Supreme Court as it entertains an appeal to review its judgement on the 2019 Imo State governorship election

As the appeal filed by the ousted former governor of Imo State, Rt. Hon. Emeka Ihedioha, asking the Supreme Court to review its judgement on the Imo State governorship election held on March 9, 2019 opens today, Tuesday, February 18, the Independent National Electoral Commission (INEC) has for the umpteenth time released the certified true copy (CTC) of its Forms EC40G submitted to the Imo State Governorship Elections Tribunal indicating that the controversial 388 polling units were cancelled due to obvious irregularities as prescribed by the Electoral Act.

The 388 polling units presented by the candidate of the All Progressives Congress (APC), Hope Uzodinma, who the Supreme Court has since declared governor of Imo State, was the basis on which the Court announced Uzodinma as winner of the March 9, 2019 governorship election in Imo State as against Emeka Ihedioha who won the election based on popular votes of the people.

However, four advocacy groups have weighed in on the raging controversy surrounding the Supreme Court’s judgement. The apex court had on January 14 sacked Emeka Ihedioha of the People’s Democratic Party (PDP) from the governorship office and declared Hope Uzodinma of the All Progressives Congress (APC) the duly elected governor of the state.

The groups- Movement for the Advancement of Democracy in Nigeria, Cadrell Advocacy Centre, Youth Arise for Nigeria and Constitutional Rights Advocates Initiative- collectively claim that the premise of the Supreme Court’s judgement was one-sided, because Section 179 (2) of the amended 1999 constitution stipulates that only a candidate with the highest number of valid votes and also a spread of 25 percent of the votes in two-third of the local governments in a state can be declared winner.

“From available facts, whereas 25 percent of votes in 18 LGAs is the minimum requirement to emerge as governor in Imo state,” said Liborous Oshoma, the Publicity Secretary of Youth Arise for Nigeria, “Emeka Ihedioha only secured 25 percent in 14 LGAs and ought not to have been returned in the first place. Shockingly, Senator Hope Uzodinma who secured 25 percent in two local government areas was declared by the Supreme Court as a governor on the basis of simple majority controversial votes from 388 units without consideration of the constitutional requirements of spread, despite the concurrent findings of both Tribunal and Appeal Court.”

He added that “Neither the APC nor the PDP candidate met these constitutional requirements. We are expecting that the Supreme Court will order the electoral umpire, the Independent National Electoral Commission   (INEC) to conduct another election for the two main candidates to the governorship seat in the state.”

The groups emphasized that it is the only way to save the constitutional democracy from public ridicule, while pointing out that the apex court did not reflect in any paragraph in its entire judgment the particular local government areas where Uzodinma met the 25 percent threshold. “This is the first time that we are having a governor declared where there is no result sheet, like in the case of Senator Duoye Diri in Bayelsa state, where the Supreme Court quickly corrected the error.  But that is not the case with Uzodinma. That’s why it is a fundamental error that ought to be corrected. If we do not raise our voices now, one day someone will win majority votes and be declared the winner. And gradually set the precedent for others to follow.”

Meanwhile, the court processes which begins today at the request of Ihedioha have been described by Uzodinma and his party, the All Progressive Congress (APC), as an academic exercise which would yield nothing fruitful.

Uzodinma and the APC who are respondents in the application by Ihedioha noted that by the provisions of the law and public policy there ought to be an end to litigation.

Ihedioha, sworn into office last May as governor of Imo State, was on January 14 removed as governor on the grounds that he did not win majority of lawful votes cast at the March 9 governorship election before he was declared winner of the poll.

According to the apex court, the failure of INEC to include votes from 368 polling units robbed Uzodinma of victory at the poll.

But Ihedioha displeased with the judgment of the apex court had approached the court with an application praying the court to set aside its own decision on the grounds that the apex court judgment was a nullity because it was a product of fraud, adding that the court was also misled in arriving at its judgment.

In the summary of the case of Emeka Ihedioha for review by the Supreme Court, he stated that the 1stAppellant/Respondent admitted under cross-examination that he was the person (and not the 3rdRespondent –INEC- or any of its officials) who computed the result that gave him the 213,495 votes alleged to have been excluded from his total votes in the election.

“The fraud was further demonstrated by Exhibits 63RD1 to 63RD19 (INEC Forms EC40G) which show that there were no valid elections in the 388 polling units where the additional 213,495 votes claimed by the 1stAppellant/Respondent were allegedly generated,” Ihedioha claimed.

But the two respondents in reply to Ihedioha’s motion claimed that the request is nothing but a mere academic exercise and an affront to the 1999 constitution.

In a 19-paragraph affidavit filed in opposition to Ihedioha’s application, the governor and his party asserted that the 60 days allowed for the Supreme Court by the Constitution has since lapsed.

“The undisputed facts relating to the Respondents/Applicants’ Motion hereinafter referred to as “the motion” are to the effect that the judgment of the Court of Appeal was delivered on 21st September, 2019 while the one sought to be set aside was delivered on 14th January, 2020. Clearly, the 60 days allowed by Section 285(7) of the 1999 Constitution (as amended) for this Honourable Court to hear and determine appeal from the Court of Appeal in an election matter, lapsed on 17th January, 2020. The Motion to set aside was filed on 5th February, 2020, 19 days after the time allowed by the Constitution.

“It is now a settled law that the 60-days limit to determine and conclude litigation on election matters is sacrosanct and cannot be extended by any guise”, they insisted in the counter affidavit filed on their behalf by the lawyer, Mr. Damian Dodo (SAN).

In the counter affidavit deposed to by one Mathew Mola, the two respondents, said the apex court is not in the habit of sitting on appeal over its own judgment as demanded by Ihedioha.

The respondents claimed that since January 14 when the apex court delivered the landmark judgment that brought Senator Uzodinma to power, the court has since ceased to have the constitutional power to adjudicate on the declaration of Uzodinma as the winner of the March 9, 2019, governorship election in Imo State.

The deponent averred that by the rule of the apex court, the court is prohibited from reviewing its own judgment once delivered except to correct clerical mistakes or accidental slips.

“As the highest court in the land, the Supreme Court jealously guides its process against abuse by litigants”, he said, “and does not indulge in academic exercise or answer by hypothetical questions.”

The deponent asserted that contrary to the claim of Ihedioha in his application, the scores of all the candidates in the election as declared by the Independent National Electoral Commission (INEC) were clearly set out, adding that a petitioner whose votes were excluded from the declared results are entitled to compute the votes excluded in the presentation of his case.

The counter affidavit denied the allegation that Uzodinma admitted that he allocated votes to himself or that the votes in the 388 polling units were in excess of the registered voters.

“I know as a fact that the issue of total number of votes cast exceeding the total number of accredited voters did not arise from the petition or the appeal considered and determined by the Supreme Court.

“I also know that the issue of the votes of 68 other candidates not been reflected was never raised by Ihedioha in the appeal that led to the judgment now been challenged.

Describing Ihedioha’s allegations as wild and baseless, the deponent said that Uzodinma and APC did not mislead the Supreme Court to perpetuate any fraud in the appeal that brought them to power.

Uzodinma and APC in their joint preliminary objection prayed the Supreme Court to strike out the request for being baseless and unwarranted.

They claimed that the application by Ihedioha constitute a gross abuse of court process, exercise in futility and an attempt to force the apex court to sit on appeal in its own judgment.

Specifically, they claimed that by section 285 of the 1999 constitution the Supreme Court can no longer adjudicate in the matter having become statute barred.

“A person affected by an order of court which can properly be described as a nullity is entitled ex debito justitiae to have it set aside, and when it is obvious that the court was misled into giving judgment under a mistaken belief that the parties had consented to it. For example, the case of Johnson v Lawanson (1971) 7 NSCC 82 is regarded as the trail-blazing case in which the Supreme Court exercised the power to overrule itself. Coker J.S.C. delivering the court’s judgment held that “when the court is faced with the alternative of perpetuating what it is satisfied is an erroneous decision which was reached per incuriam and will, if followed, inflict hardship and injustice upon the generations in the future or of causing temporary disturbances of rights acquired under such a decision, I do not think we shall hesitate to declare the law as we find it.”

The undisputed facts relating to the Respondents/Applicants’ Motion hereinafter referred to as “the motion” are to the effect that the judgment of the Court of Appeal was delivered on 21st September, 2019 while the one sought to be set aside was delivered on 14th January, 2020. Clearly, the 60 days allowed by Section 285(7) of the 1999 Constitution (as amended) for this Honourable Court to hear and determine appeal from the Court of Appeal in an election matter, lapsed on 17th January, 2020. The Motion to set aside was filed on 5th February, 2020, 19 days after the time allowed by the Constitution. It is now a settled law that the 60-days limit to determine and conclude litigation on election matters is sacrosanct and cannot be extended by any guise

News in Photographs: Buhari Receives Briefing on Impact of COVID-19 on Economy