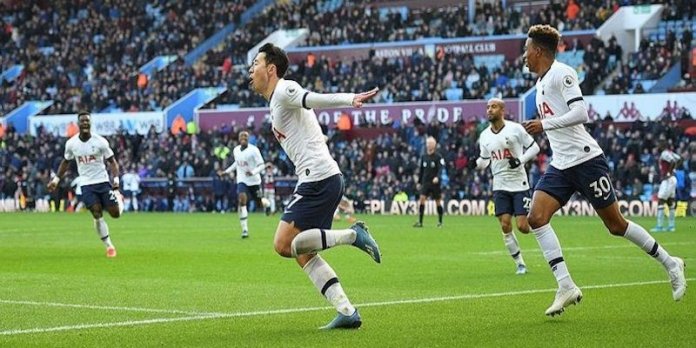 Son Heung-min’s stoppage time goal gave Tottenham a last-gasp victory in an entertaining game at Aston Villa and took the visitors up to fifth in the Premier League table.

The result means Jose Mourinho’s side have leapfrogged Sheffield United and are now a point behind fourth-placed Chelsea, who have a game in hand.

Villa, who remain a point above the bottom three in 17th, made the stronger start and took the lead via Toby Alderweireld’s own goal – with the Spurs defender prodding Anwar El Ghazi’s cross past goalkeeper Hugo Lloris.

The Belgian atoned for his error by equalising with a superb angled effort that flew into the top right corner of the Villa goal from 10 yards.

Spurs, who always looked dangerous in attack, went in front when Steven Bergwijn won a penalty after being fouled by home defender Bjorn Engels.

Son’s initial spot-kick was saved by Villa goalkeeper Pepe Reina, but the South Korean forward followed up to score and become the first Asian player to reach 50 Premier League goals.

The hosts responded after the break with Engels heading in from a Jack Grealish corner to level the scores.

However, another Engels mistake allowed Son to race clear late on to place the ball past Reina as Villa’s miserable run against sides in the top half of the table continued.

While Dean Smith’s side have earned just one point against sides currently in the top half, a wider concern for the Villa boss is that eight of their 15 defeats this term have been by a solitary goal.

This was another occasion on which they could have taken at least a point from a hard-fought contest but for individual errors – with Engels having an afternoon to forget.

The 25-year-old Belgian, who started because of Tyrone Mings’ absence through illness, had a difficult time dealing with the movement and pace of Bergwijn, Son and Lucas Moura.

It was his rash challenge on Bergwijn that allowed the visitors to go in at the interval with the lead in a game Villa had enjoyed the better of until then.

In his late lapse, Engels allowed the ball to run under his studs, enabling Son to score the decisive goal. Engels