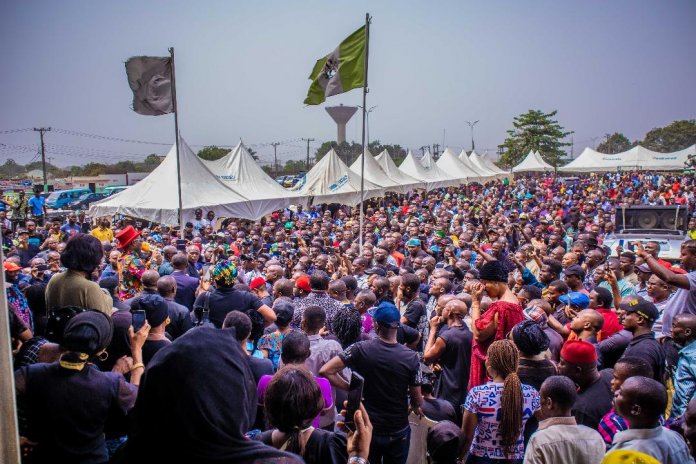 The patron of Imo Concerned Citizens Forum, Charles Oputa, popularly known as Charly Boy, yesterday at a protest in Owerri, the Imo State capital admitted that the Supreme Court is not above human error, urging the apex court to correct itself.

This is as an attempt by the some hoodlums suspected to be supporters of the All Progressives Congress (APC) in the state to stop the ongoing protest against the removal of Emeka Ihedioha as governor of Imo State by the Supreme Court was yesterday foiled by angry youths and security agents.

Thousands of supporters of Ihedioha had converged on the ancestral ground of Owerri, Ugwu Ekwema on Egbu Road, before 10a.m. to continue with the protest against the removal of Ihedioha.

At the resumed protest, the hoodlums attempted to block the march of Ihedioha supporters by setting up tyres as burn fires.

They were, however, overpowered by the protesting youths and security agents, who chased them away from the road to enable the protest to continue unhindered.

The protesters were led by Charles Oputa under the auspices of Imo Concerned Citizens (ICC), who demanded the restoration of Ihedioha as the governor of Imo State.

Oputa told the members of ICC that the protest was for the good of Imo State and the people.

The activist, who claimed to be the father of frustrated Nigerians, said Imo people are angry at the ouster of Ihedioha, even as he maintained that the stupidity of the people was over.

According to him, “Everyone here is angry at the removal of Ihedioha. What we are doing here is not about a person but for the good of the Imo people. Our stupidity is enough, and we must realise that the people are the real government while office holders are our servants. But because of lack of understanding, we have them think they are in charge.”

He said further: “We are here because of the progress of Imo State, especially the youths like me. The Supreme Court judges made a mistake, and what we are doing here is to say there has been a miscarriage of justice. We are pleading with the Justices to please reverse themselves on the Imo case.”

According to Charley Boy, son of revered Supreme Court Judge, late Justice Charles Oputa, his father always told him that wherever he sees injustice, he should rise up and address it because if one does not, it will come back to fight him, adding that the learned jurist told him that the apex court can make mistake but that it should correct itself immediately.

The showbiz crooner said Imo State for eight years was bedeviled with bad leadership, adding that Ihedioha helped to put the state in right reckoning, saying the Supreme Court should immediately restore the choice of the people.

Earlier, one of the leaders of the Imo Concerned Citizens, Kingsley Onwubiko, said the Imo people are angry at the apex court for removing Ihedioha, who according to him, is “our liberator, a man who came and removed foolishness from our state. We beg the Supreme Court to give us back the man Imo people voted for.”