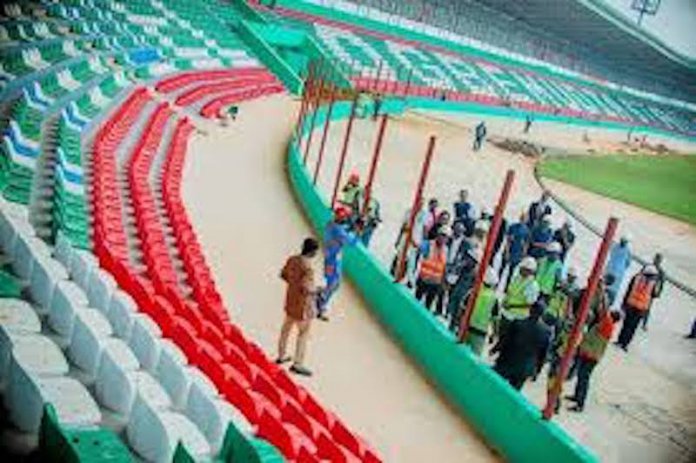 After several weeks of speculations, the Nigeria Football Federation (NFF), May have shelved the idea of playing Super Eagles first international match of the year at the refurbished Samuel Ogbemudia Stadium in Benin, Edo State.

The refurbished stadium with a sitting capacity of 19,500 stands as one of the best in the country today and is equipped with the latest facilities.

It was due to be formally opened with the Super Eagles’ Day-four match of the ongoing AFCON 2021 qualifying round clash with Sierra Leone on the 22nd of March, 2020.

However, THISDAY last night confirmed from a top official of the Glass House in Abuja that the ancient city of Benin which last staged Super Eagles match in 2011 against Boswana which ended goalless with Late Stephen Okechukwu Keshi in charge of his first match as gaffer, may have to wait for another time.

“We have a strong bond with Edo State Government and this explained why we’ve had many events in Benin lately but due to some reasons, this important match against Sierra Leone will not hold in the new stadium,” the top official said in a telephone chat last night.

With Benin no longer in sight, THISDAY learnt that the NFF is looking in the direction of either the Stephen Keshi Stadium in Asaba, Delta State or Godswill Akpabio Stadium in Uyo, Akwa Ibom State.

Both stadiums hosted Super Eagles’ matches in the past. Uyo Stadium in particular was were Eagles secured their qualification to the 2018 World Cup in Russia

Delta bankrolled the sent forth match for the Super Eagles to the last AFCON tournament in Egypt where they claimed the bronze medal.

Although no clear reason was given for why NFF decided to move the Sierra Leone game from the Samuel Ogbemudia stadium, THISDAY checks revealed that it may have something to do with the forth coming National Sports Festival (NSF) which the state will host next month to early April.

Physical infrastructure needed for the games are being completed at the Samuel Ogbemudia stadium with base for the track being laid, as the football pitch is ready. Work at the lawn tennis section is completed, while the swimming pools are being furnished.

Organisers of the festival have scheduled the football events at other designated venues leaving the edify to stage only track and field events, as well as the opening and closing ceremonies.

With the Uyo and Asaba as options for Eagles, NFF have at least two weeks to communicate the new venue to CAF as well as the visiting team in accordance with the tournament rules and regulations