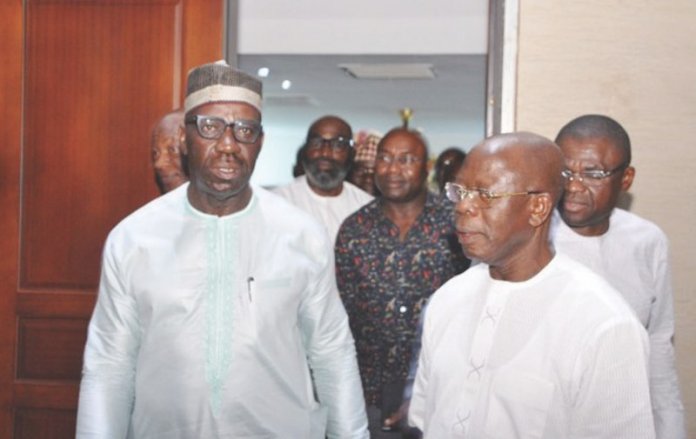 Edo State’s lingering political crisis appears to have assumed a rather dangerous and destructive dimension, such that could eclipse the fortunes of the ruling party in the forthcoming governorship, writes Adibe Emenyonu

This crisis of confidence between the warring factions in the Edo State All Progressives Congress (APC) appears irreconcilable with the dimension it has attained lately. Before the latest development, their differences were all about verbal exchanges, suspension and counter-suspension.

The near semblance of fisticuffs was the disruption of meetings at Ivbiaro in Owan East Local Government Area of the state, the destruction of chairs and canopies at Aganebode, headquarters of Etsako East Council area, the burning of rostrum, canopies and chairs in Auchi, and Fugar, the administrative headquarters of Etsako West and Etsako Central local government area respectively.

There was also the chasing away of those, who came for empowerment programmes organised by the member, representing Owan federal constituency in the House of Representatives, Professor Julius Ihonvbere for members of his constituency by people presumed to be political thugs.

Apart from the aforementioned, the feud of confidence between Governor Godwin Obaseki and his estranged predecessor, Adams Oshiomhole, has never gone beyond throwing tantrums, accusations and counter-accusations.

But the crisis added a frightening dimension in the struggle over who gets the party’s ticket in the scheduled primaries slated for May/June this year according to the timetable released recently by the Independent National Electoral Commission (INEC) between the two rival groups: Obaseki-Shaibu Movement (OSM) and the Edo Peoples Movement (EPM), when suspected thugs stormed the law chambers of Henry Idahagbon, a former Attorney General and Commissioner for Justice in what some described as an assassination attempt on his life.

The thugs were said to have come to the place, when Idahagbon was attending to some clients and shot at the windows of the two storey apartment housing other business offices, forcing the occupants to scamper to safety.

Badly affected in the commotion was an elderly lady, who sells drinks at the ground floor of the building whose wares was damaged including chairs and fridges that were smashed by the hoodlums, who attacked the building.
Speaking to journalists on the development, Idahagbon pointed fingers at the state government as responsible for the attack, saying government attacked him using their ally, who is a transporter and chieftain of the faction of APC loyal to Obaseki from Egor local government.

Narrating his experience, Idahagbon, said the gunmen came in three vehicles and fired several shots at his office located on Siluko Road, near the popular Oliha Market.
He said he was in his office attending to his clients, when he was jolted by the volley of bullet shots aimed at his office on the mid floor of the building.

One of the victims of the attack, who spoke with journalists, Mr. Alufa Osayiniye, said he was at Idahagbon’s office, when people began to shout and the next thing he heard were gun shots and he decided to bend down as blood came out of his
Another victim, Bruno Odaro, a surveyor with office in the building, said some persons with Hilux, branded with government number came “shouting where is Idahagbon, where is Idahagbon and started destroying things, shooting.

“If I take you upstairs now, you will see things for yourselves and you will see the bullet holes on the wall. It’s so pathetic. We had to run for our dear lives. Coming around after they left, we saw the destruction. The time was around 1.15, 1.30 pm.”
But in his reaction, spokesman to the governor, Mr. Crusoe Osagie said the attack was as a result of infighting between members of the faction loyal to Oshiomhole.

In a statement issued to that effect, Osagie said Oshiomhole and his followers were the ones causing the breakdown of law and order in the state, restating government’s resolve that it would spare nothing under the laws of the land in dealing decisively with the merchants of violence.

Few days after the Siluko road episode, another violence erupted when a hand grenade went off and exploded in the premises of Chief Francis Inegbenekhi in the Government Reservation Area of Benin City, capital of the state destroying a vehicle parked in the compound and a part of the building.

Inegbeneki, who was not at home as at the time of the explosion, said he got the information with rude shock.
“Frankly, I am short of words. It must have been politically motivated. After this successful political rally to receive our brothers and sisters coming to join us in APC, I am going to Benin to assess the damage.”

Querying why politics should be violently taken “this far”, Inegbeneki recalled that only recently, Governor Obaseki threatened to deal with those opposed to him and warned that, “For those beating the drums of war, they should be prepared to dance to the music”.
Inegbeneki, who spoke with journalists after the rally at Opoji, Esan Central local government, pointed fingers at the governor and his deputy over the attack on his house and called on President Muhammadu Buhari to rescue the people from the hands of Obaseki and his deputy, adding that, “Edo is under siege.”

He said politics should be about lobbying and not coercing, urging Obaseki to lobby APC members instead of using force.
“We have said it loud and clear; we’re not going to support Obaseki for a second term,” Chief Inegbeneki declared.
Pastor Osagie Ize Iyamu described the attack as an act of cowardice. “Very early this morning around 3.am, they went to Chief Inegbeneki’s house in Benin to throw hand bomb. They threw the first one it did not detonate. They threw the second one, which exploded. Thank God there was nobody inside the house. If somebody had died, I don’t know what they would have said?
Countering these claims, the APC faction loyal to Obaseki, accused Oshiomhole of being the one orchestrating the violence in in the state to create tension.

Publicity Secretary of the faction, Rev. Joseph Osagiede, who made the accusation at a press briefing in Benin City, noted that in the past few months, the APC national chairman has repeatedly disregarded directives from the state government and other law enforcement agencies, including the police and the judiciary, and on several occasions, caused disruptions that have led to bodily harm to citizens as well as distraction of public and private property.

He said Oshiomhole’s penchant for lawlessness took another turn for the worse, when last weekend, he along with his lieutenants in Edo Peoples Movement (EPM), resorted to the use of explosives and other dangerous weapons in some parts of the state, thereby endangering the lives of law abiding citizens.

The Edo APC insisted Oshiomhole and his cohorts in the EPM were the ones orchestrating violence and crisis in the state.
Commenting on the latest attacks, a former House member, who represented Orhionmwon/Uhunmwode Federal Constituency, Mr. Samson Osagie, said Edo State government has continued to dwell in error by seeking to put blame on every other person, other than itself.
Osagie who is loyal to Oshiomhole, wondered the rationality of a governor, who is suppose to be the Chief Security officer of the state to be the one putting the blame on other persons rather than himself.

He said over time, the governor has openly threatened in his over-bearing attitude and desperation bid for a second tenure, issued real threat to no less person than the National Chairman of APC that if he ever comes to Edo to foment trouble, they would do to him what they know how to do best.

The crisis in Edo APC has cross the red line as both faction are hell bent on decimating each other in the struggle over who occupies Dennis Osadeby Avenue, seat of Edo State Government. This may as well create ample opportunity for a well-organised political party to take over the reign of governance in the state, because of the hardline posturing of both groups to fight to the finish.
Unfortunately, the only strong opposition party, the Peoples Democratic Party (PDP) is also having it’s own fair share of internal crisis over imposition and zoning formula.

While the party zoned its chairmanship position to Edo Central senatorial district, notable politicians from the zone are saying no zoning was reached at the last meeting hosted by former Governor Lucky Igbinedion.
Some of them have therefore threatened to pull out if leaders of the party refused to hearken to the voice of reason.
Last Thursday, a state High Court sitting in Ekpoma, headquarters of Esan West local government area, barred the state PDP from Conducting LGA Congresses. Not only that, the court also stopped the party from announcing the results of the ward Congresses counted Saturday, February 1.

The court presided over by Justice Joy Okeaya-lnneh granted the order following a interlocutory injunctions filed by former members of Edo State House of Assembly, Mr. Eruanga Gallant, Victor Idiakheoa and Jide Obalowoshe.
Justice Okeaya-Inneh while restraining the PDP from conducting the LG congresses across the 18 local government areas of the state also restrained the PDP and INEC from announcing, publishing and recognising the ward congresses results earlier conducted by the party.

He said the applicants had satisfied the guidelines for the grant of the order sought as enjoined in the landmark case of Kotoye vs CBN (1989) and adjourned the case to 24th of February.
Who then will rescue the heartbeat of the nation? Only the events of the months ahead can help answer the question.
Pix: Obaseki and Oshiomhole1.jpg

At 70, I Still Believe in the Nigeria Project’