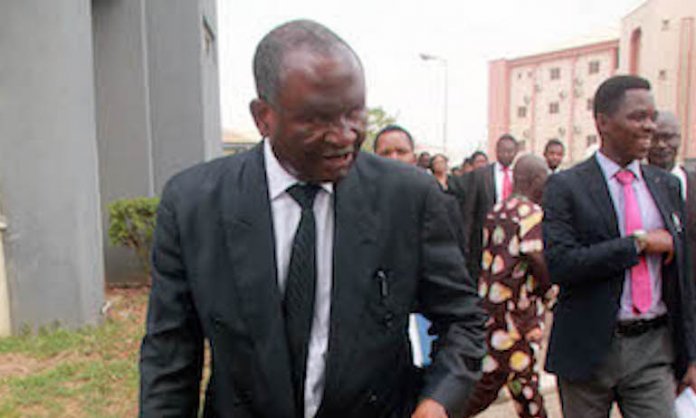 Counsel to the former Governor of Imo State, Emeka Ihedioha, Chief Kanu Agabi, has said his client’s application has given the Supreme Court a unique opportunity to uphold the credibility of the judiciary.
Agabi’s position was contained in a written address that accompanied the application of the Ihedioha.

Last Wednesday, Ihedioha, the Peoples Democratic Party (PDP) governorship candidate in Imo State, asked the apex court to upturn its decision and sack Hope Uzodinma, his successor.
On January 14, the court had sacked the PDP candidate in the March 2019 election and replaced him with Uzodinma, who finished a distant fourth.

The judgment had elicited a lot of reactions and protests
But in his application, Ihedioha said the judgment should be annulled because the apex court was misled by Uzodinma.
He added that the judgment was obtained by fraud, noting that it was not made on statutory provisions.

In the written address sighted by THISDAY, Agabi, a former Attorney General of the Federation (AGF) and Minister of Justice, asked the Supreme Court to prove to the world that it is sacred.
“At this, of all times, our Supreme Court has been afforded this unique opportunity of allaying the fears of those who cast aspersions on the credibility of our courts,” he said.

“Those who mean well for the nation will agree that we have here an opportunity for the Supreme Court to mitigate public misgiving of our courts and to rehabilitate her reputation and restore the good name of the judiciary by setting aside this judgment which seems to us to be a nullity; we may be quite wrong. In that case, please, forgive us. “Your verdict in this matter should match the solemn oath you have taken. Remember that every decision of this honourable court involves the good name of the judiciary. Prove to the world that this court is sacred. Let your verdict help to retain the good graces of our people.

“It is owed to the work of this Supreme Court that the nation continues to survive. It is that work that gives us the confidence to present this application. That you are willing to reconsider your decision gives you honour and glory.

“We come before you firmly convinced that you will act in aid of the cause of justice. In this application we appeal to you, we urge you, we beg you to preserve the glorious reputation of this court. We appeal to you to prove wrong all those who have an evil opinion of our judiciary. Here is a great opportunity for your Lordships to act.

“Free the judiciary from suspicion. Give no one cause to despise our courts. Prove to the world that you are the equals of the courts of other nations.