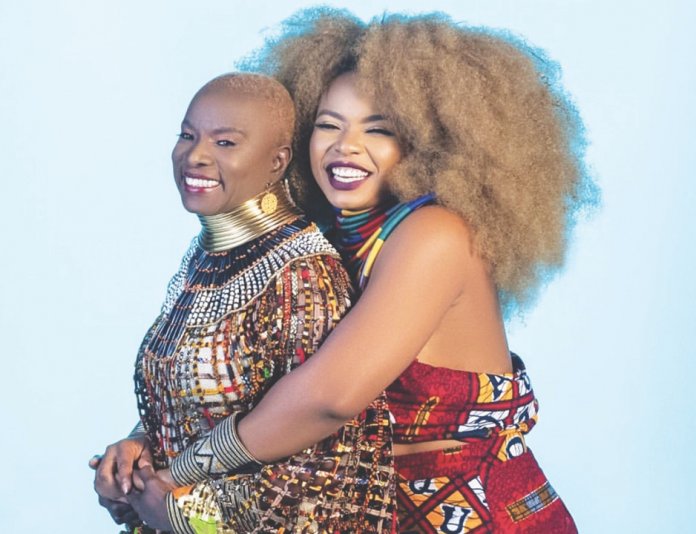 Yemi Alade is definitely not slowing down in 2020 as evidenced by the huge moves she is already making this year. The Woman of Steel is out with the visuals for Shekere, featuring legendary Beninese singer/songwriter, Angelique Kidjo. ‘Shekere’ is the sixth single off Alade’s recently released fourth studio album, ‘Woman of Steel’. The talented singer took to her social media page on Wednesday to share the YouTube link of the visuals to her numerous fans.

“Watch my Spanking brand new video #Shekere– ft @ Angelique Kidjo,” she wrote on Instagram. The cinematic visual for the praised number opens in dramatic sequence which displays the authentic beauty of the African continent, a theme which has dominated Alade’s artistry. Alade and Angelique Kidjo performed their verses dressed in traditional attires while surrounded by vibrant tribal African costumes.

Some of the shots are set in a studio, some seen in an outdoor location where the famous Maasai jumping dance is performed along with other African cultural dances. The classic visual joins Alade’s elite videography which made her the first and only female Afro-pop artiste to have over 100 million subscribers on YouTube, and a total cumulative visual stream of over 400 million views. The less than five minutes video, which is already showing on music channels, sees Alade and the four-time Grammy winner dazzling in several traditional attires showing the glitz and glamour of the African culture.

Produced by TBA and directed by Ovie Etseyatse, the visuals is the fifth video off Yemi’s critically acclaimed Woman of Steel album which was in 2019 after the music superstar dropped visuals for Vibe. The song is widely reported as the result of a request by Kidjo for Alade to revamp Kidjo’s classic song, ‘Wombo Lombo’ and the song came out amazing, ditto for the video release which seems impeccably timed.

Kidjo won her fourth Grammy last month, during which she gave an acceptance speech about the importance of supporting the new generation of artistes emerging from the continent. In ‘Shekere’, Alade celebrates the African culture with the colourful outfits don by everyone in the video. Angelique Kidjo’s presence adds a certain extra tingle to the song and its visuals, making this a delight to watch.

Shekere projects heavily sampling elements from the original updated to the current mainstream Afro-pop sounds. “I dey hear the sound of a tambourine o, Talking drums and shekere combination, I see people under the tambourine o, Dancing like sey there’s a celebration”, Alade emotively sings before progressing into a stellar duet with the iconic Angélique Kidjo who also sings in her native Benin dialect.

Apparently, those who know Alade are not to be surprised by her working with the Grammy-winning star Angelique Kidjo. Both of them never forget to pay homage to their roots. And this they do with obvious relish in Shekere video which shows Kidjo as the real Mama Africa.