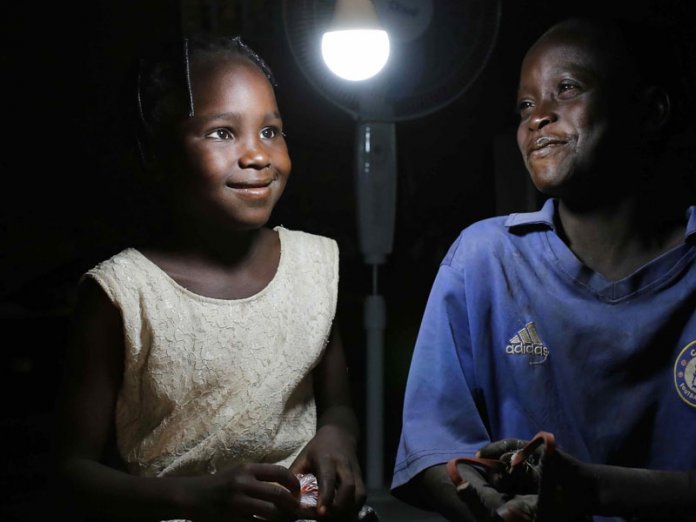 One is a documentary filmmaker, the other works in the public sector. Fate brought them together to light up Chibok, the North-east town ravaged by terrorism, writes Vanessa Obioha

When Damilola Ogunbiyi first met documentary filmmaker Joel Benson nine years ago, he was just a young lanky man with his camera. At the time, she was the General Manager of the Lagos State Electricity Board. The agency needed someone to produce a documentary and Benson was recommended. She was intrigued by his enthusiasm and passion to deliver on the job that she didn’t blink twice in giving him the deal. The rest they say is history. The relationship has blossomed into one of respect and admiration. He calls her ‘his madam’ and she, a son whom she is very well pleased with.

“I’ve watched him grow his business from just a one-man camera crew to a team of young filmmakers who are quite dedicated to their craft,” she says.

It was Ogunbiyi who pushed Benson to try his hands on virtual reality, an immersive technology that has recently become a powerful communication tool for filmmakers. Benson recalled that at first he was uninterested but Ogunbiyi’s words that it will change his game made him consider learning the new skill.

Indeed, the decision turned out to be a life-changing experience for Benson. His virtual reality films have not only fetched him global spotlight but also helped in bringing hope to a community that is almost forgotten.

Early last year, while working on a project in the North-east region, Benson passed through Chibok, the infamous town of the abducted school girls in 2014. There’s so much speculated reports about the town and the abduction that the veracity of the incident seemed suspicious. Out of curiosity, Benson decided to seek the truth. He visited the town, searched for victims and survivors and tried to bring their story to light.

Beyond the despair of mothers waiting for their kidnapped children, Benson saw a town stripped of basic necessities of life. The lands were fallow and dry. There were not enough fertilisers to help farmers grow their crops. Worse, the town has been in perpetual darkness since the terrorist group Boko Haram started ravaging the northern region of the country more than a decade ago. Residents had to travel long distances to charge their phones. At night, phone batteries hung on trees like lights on Christmas trees. Only few who could afford small generator sets can enjoy the luxury of light. For most of the residents, charging phones has become a lucrative business.

Benson made up his mind to use his film ‘Daughters of Chibok’ not only to portray the emotional trauma of parents of the kidnapped girls but also to bring economic salvation to the town.

‘Daughters of Chibok’ was greeted with ovation. It was first shown to the public on the fifth anniversary of the sad incident, April 14, 2019. It would later be privately screened at British Council in Lagos and further win the prestigious Virtual Reality Award at Venice International Film Festival last year.

The reaction to the film which centered on Yana Galang, mother to one of the kidnapped girls, Rifkatu Yakubu has always been very emotional. At the festival, Benson was praised for reminding the world of the plight of the villagers. Sometimes, the feedback ignites the spirit of altruism. Like in the case of Ogunbiyi. She gently recalls the first time she watched the film.

“‘Daughters of Chibok’ is a powerful story. The first time I saw the film, I was moved to tears. Being a mother of two young girls, I could not even begin to imagine the pain that these women were going through, not knowing the fate of their missing daughters, and not able to have any form of closure. Thankfully, what this film has done is to bring the plight of these women back to discussion, and now people are asking, ‘what can we do?'”

It was the kind of reaction Benson was hoping for, to make people want to reach out and help the poor villagers. Last year, he was able to get some fertilisers donated to the women.

But the biggest gift came towards the tail end of 2019.

“After she (Ogunbiyi)watched the film, she said, ‘I must do something about this.’ I asked her what she would love to do for them and she asked if they have power in Chibok, I said, ‘No, they don’t have power’,” recalls Benson.

Ogunbiyi pledged to bring light to the city. At first, Benson didn’t give her commitment so much thought until he received 120 portable solar kits from her.

“I couldn’t believe it but I was so excited and eager to light up Chibok,” he recounts enthusiastically.

The solar kits came with a solar panel that is connected to a small solar generator. It has two charging points where they could charge their phones. It also has a radio and a standing fan.

Benson’s plan was to first of all lit up the homes of the victims of the kidnapped girls. But with 120 solar kits, the lights couldn’t go round all the homes. However Benson ensured that those who needed the light most got the kits.

“We also focused on homes that have children that are still in school; we wanted to link the provision of these solar kits to the ability of these kids to be able to extend their reading hours; we wanted them to read at night.”

The joy of seeing their homes lit was overwhelming for the Chibok residents. They stared in awe, elated that at last, their homes were illuminated and the long trek to neighbouring towns to charge their phones were over. But more importantly, children still in schools can now read at night. Prior to that, they usually read with the aid of a torchlight, strapped on their heads.

One of the things Benson insisted on when delivering the kits was that the youths get trained on installing the kits.

“We told the community leaders to select 10 youths whom they feel are intelligent enough and some that may have technical background. But we insisted that girls should be among the selected youths. So we had four girls and six boys who were trained on how to install the kits. Out of the 10, we also ensured that some of them come from the affected families. It is a way of empowering the youths.”

For Ogunbiyi, donating the solar kits was a way of telling the women that they are not forgotten.

“There’s so much that can be done to alleviate the pain of these parents, especially the mothers. During my discussions with Joel I learnt that the women of Chibok place a premium on education, especially the education of their daughters. Seeing that they have no access to electricity, and understanding the impact that this has on the ability of their children to study at night, I decided, with the support of a few dedicated young Nigerians, to provide solar home systems with fans to light up the homes of these women, just as a show of support and solidarity; and to let them know that they are truly not forgotten,” she says.