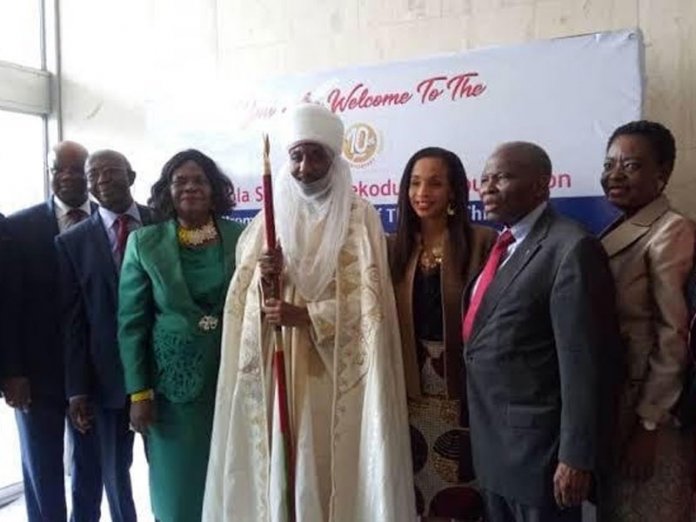 With the goal of promoting, facilitating and contributing to the development of qualitative female Nigerian professionals and leaders, Ajesola Solarin Majekodunmi Foundation (ASMAF), has for the past ten years been assisting financially the handicapped young Nigeria women by providing scholarships awards covering financial sponsorship for professional courses at tertiary academic level, and leadership skills development.

Thus, all roads recently led to Lagos State as monarchs and dignitaries stormed the Nigerian Institute of International Affairs (NIIA), to mark the 10th anniversary and launching of N100 million AMSAF Secretariat, and 80th birthday anniversary of the founder of AMSAF, Prof. Ajesola Majekodunmi.

Addressing attendants, Chairman of the occasion, former High Commissioner to the United Kingdom, Dr. Christopher Kolade, applauded the foundation for its commitments geared towards empowering and championing girl-child education in Nigeria.

Speaking further, Kolade spoke tough on the need to give opportunities to Nigerian women most especially agreeing to the popular saying that ‘in empowering a woman, you empower a generation’. He added that providing equal gender opportunities will catapult the country to a greater height.

In his words: “I have to congratulate the celebrant for her 80th birthday and to mark 10 years of this foundation. Not only, we are grateful to God for what He has done and what He is doing. This foundation has shouldered the girl-child development in this nation.

“I want to thank the foundation for showing us the the way to go so that we can give the girls the opportunity to demonstrate what they can do. Those seeking for opportunity can tell for free that there is no difference between men and women when it comes to opportunity. Capacity and opportunity should be given to every citizen of this country so we can build the nation together and this I think is what Nigeria needs”.

The Royal Father of the event, the Emir of Kano, Muhammad Sanusi II, joined the league of advocacy for girl-child education. He charged decision makers in the country to provide similar opportunities given to men to women.

“The issue of the empowerment of the girl child is something that as a nation we need to take seriously. It requires those who are in the position to help. I remember when I was in primary school, my sister completed her secondary education. In those days if a girl exceeds primary education then she must be very lucky.

“My father insisted his daughter will go to the university and she went and graduated as the first female graduate of the family. Frankly, those who know me can tell the issue of women has been what I have been passionate about. For those who have the voice to speak should raise their voices for the stakeholders to put their money where their mouth is. We should look into how much money is been set aside for children to go school.

“In the North, you will hardly find a female local government chairman. And people are blamed for not sending their children to school. We need to educate people to understand the issues of the girl child” he said.

Sanusi recalled his efforts channeled to reshape the banking sector by ensuring more women are employed to fill top positions in the banking system.

“When I was the Central Bank of Nigeria Governor, I decided to declare in 2012 the year for women in banking. To ensure that any bank recruiting new officers much ensure that 40 per cent of female management are female. And if you look at the banking system today you will see females. Not having women at the top is why the country is not moving forward.

“There are two reasons why we should root for women, half of us are women and the other half were produced by women,” he said.

“What was uppermost in mind is that part of the well educated. I remembered as a girl child when I was supposed to go to secondary school, we had series of family meetings and I thank God for my parent for believing in education.

“Observing the country today, politics for example, many women are not in positions because they do not have economic independence. We want to push this for development.

“ASMAF is not a political foundation but an NGO. There is no religion discrimination and it’s also cut across the six geo-political zones of the country. We are looking for your support so that ASMAF will move forward so that when people like us are gone, we still progress.

“The foundation is bent on helping indigent girls that are brilliant to a have their dreams. The 10th anniversary is also a funding raising of 100 million naira. We are reshaping the lives of people which also put smiles on our faces too,” she said.

The keynote speaker, Mrs. Ndidi Nwuneli, stressed on serving as role models to the girls by preparing them for the future.

“The big change we need is our policies and prophesies. We need to provide partnership and role models for our girls. I’m proud to see that the foundation is doing well in these areas and will enjoin them to keep up with the good work.

“We want to ensure that we have women that will have access to the best position in this country. Some women are of the opinion that they don’t want to be too successful thinking they won’t have a husband or be a good mother to their children. That’s civil problem, we are facing in this part of the country,” she said.

On the ASMAF N100 million fund raising, the foundation has appealed to good spirited individuals, corporate bodies and government for support through donations. The foundation through its Board of Trustee said the commemoration of its 10th year anniversary revolves around raising N100 million towards expansion and continuity of the project.

The foundation seeks more funding to perpetuate the existence of ASMAF, build a befitting secretariat, put in place a better structure of permanent personnel like an executive secretary and other categories of employees to keep driving the project to the next level and also extend more awards to larger number of applicants.