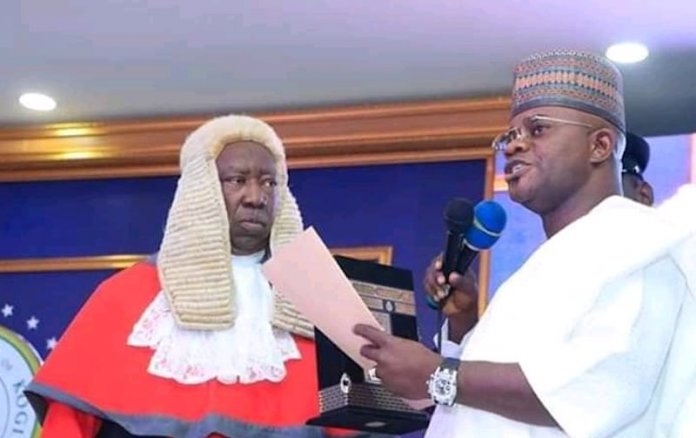 Ibrahim Oyewale writes that Governor Yahaya Adoza Bello of Kogi State has promised to redouble his efforts at good governance, in order to score better ratings in his second tenure

As January 27, 2020 marked the beginning of the second tenure of Governor Yahaya Adoza Bello in office as 4th executive governor of Kogi State, expectations are high that the incoming administration may provide a paradigm shift from what it used to be, to what it ought to be, in terms of rapid development in the Confluence State

No doubt, the last four years have been filled with mixed feelings as opinion are sharply divided over some of the government’s policies and style governance. To this end, some school of thought are of the view that the first term of the administration was eventful after all and the governor has excellently done very well. This was strictly based on their empirical observations.

Watchers of political events in Kogi State have scored Governor Bello’s administration high in area of security, civil service reform, particularly weeding out of ghost workers, those who forged various certificates to join the civil service and those whose names had appeared in federal, state and local governments payrolls.

Bello has also been commended for his ability to resolve all the issues surrounding non- payment of salaries in the state, as what hitherto constituted major barriers have been removed. Late or non-payment of salaries is now a thing of the past as salary and pension are being paid promptly.

In the area of infrastructures, the pundits noted with nostalgia that while the administration has completed some roads projects before the last governorship election, they, however, urged the governor to do more in area of road construction, particularly giving a deserving facelift to roads in the state capital, which are in deplorable condition.

On the other hand, critics of the Yahaya Bello administration have not minced words by calling on him to be focused and improve on what might have been achieved in the past four years, arguing that a lot still needs to be done in many areas to move Kogi State to an enviable pedestal. It has not been easy for members of the opposition party since they lost power to the ruling All Progressive Congress (APC) in the state in the past four years. While the hues and cries may have been seen from opposition angle, other groups have genuinely taken the government to task in other critical areas of governance and policies.

A Lokoja-based human rights activist and Executive Director, Conscience for Human Rights and Conflict Resolution (CHRCR), Mr. Idris Miliki Abdul has condemned the administration for its inability to conduct local government elections in the past four years.

“No genuine efforts have been made to conduct elections to these councils as provided by the law specifically in section 7 (1) of the 1999 Constitution of Federal Republic of Nigeria (as Amended), in the last four years.

Abdul explained that it was worrisome and condemnable that the Kogi State House of Assembly created by law to make laws for the citizens of Kogi State, has continued to extend the tenure of the illegal administrators without any justification.

“We call on the Kogi State House of Assembly to perform it constitutional role as entrenched in the constitution of the Federal Republic of Nigeria in all ramifications as Local Government Administrator or any other nomenclature is unknown to the law in Nigeria,” he stressed.

He said further, “While we congratulate the governor on his four years in office, it is pertinent to look at some of the decisions of this government in the last four years.” How local government councils enjoy autonomy, when elections are not conducted at that level? It is worrisome and unimaginable, that since March, 2019 when the tenure of the immediate past Chairman of Kogi State Independent Electoral Commission expired and he has since left office, there has not been any replacement and other commissioners whose tenure has also expired have not been replaced.

Abdul posited that it was ridiculous that an agency that is statutorily constituted by law could not be constituted by a government and a governor. “It is unbelievable that the tenure of chairman of an election body has expired since March 2019 and we are now in January 2020. No appointment has been made, and no nomination to that effect is pending before the Kogi State House of Assembly.”

The activist also called on the state government to establish a state-owned television station to help in the areas of information dissemination, educating people on government policies, entertainment and to promote all the cultural affinity that binds the people of the state together.

At his inauguration, Bello called on all and sundry, friends and perceived foes to put aside partisan differences, ideology or affiliation and join hands with his administration to give the state the best of governance during his second term.

Bello who made the call in Lokoja shortly after taking the oath of office administered by the state Chief Judge, Justice Nasiru Ajanah. He assured that his second term would bring a revitalized energy to bear in delivering a refocused system of governance, while calling on all to support the government in achieving its laudable programmes for the development of the state.

“My primary allegiance as governor will remain to Kogi state and her citizens, not to party or tribe. Everyone is my citizen and I owe everyone the protection and fidelities inherent in the office. “It is on this note that I enjoin all Kogites to look forward to the next four years with optimism and great expectation. We will do everything in our power as government to make sure that the state is productive, prosperous and peaceful,” he said.

The governor stated his mission for the state in his second term: Bello promised to sustain focus on agriculture for improved food security, mass employment and increase in Internally Generated Revenue, adding that agricultural revolution which he has kick started in the first term would be taken to the next level.

“Specifically, rice, cassava, cashew, aquaculture and livestock will remain the bedrock of our activities in the agricultural sector. Outside of agriculture, we are also going to pay greater attention to human capital development by investing more in training our people for enhanced relevance in a technologically evolving future. We will embark on large scale urban renewal projects that would further transform Lokoja into a resilient capital city with modern utilities attractive to tourists,” he noted.

“Our overall mission in this second term is to develop Kogi State into Nigeria’s foremost and most secure emerging commercial hub through optimization of the state’s geographical location, natural endowments and for a sustainable future,” the governor stressed.

Bello also assured the people of the state that his administration shall embark on large scale urban renewal project to further transform Lokoja into a resilient capital city with modern utilities attractive to residents and tourists alike, adding that even though upgrading the sights and sounds of Lokoja will be paramount, such beautification project will extend to, at least, one major town in each senatorial district.

The governor therefore appealed to the people of the state to give their cooperation and support to the government by ensuring that there is peace and adequate security of lives and property to enable the government transform the state.

The governor stated his mission for the state in his second term: Bello promised to sustain focus on agriculture for improved food security, mass employment and increase in Internally Generated Revenue, adding that agricultural revolution which he has kick started in the first term would be taken to the next level….Bello also assured the people of the state that his administration shall embark on large scale urban renewal project to further transform Lokoja into a resilient capital city with modern utilities attractive to residents and tourists alike