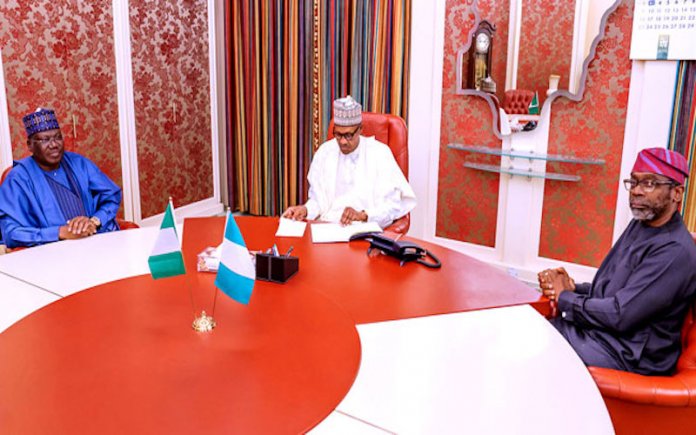 Almost a week after the National Assembly raised concerns over worsening insecurity in the country and called for the removal of service chiefs, President of the Senate, Dr. Ahmad Lawan, and Speaker of the House of Representatives, Hon. Femi Gbajabiamila, met with President Muhammadu Buhari yesterday in the State House to discuss the raging issues.

In a swift response to the concerns of the legislature, the three leaders resolved to work together over the country’s security affairs and resolved to constitute a committee to periodically review security issues ravaging the country and devise the way forward.

Answering questions from State House reporters after the meeting, Gbajabiamila said membership of the committee would be drawn from both the executive and the legislative arms of government and would meet once in a month to review security situations in the country.
According to Gbajabiamila, yesterday’s meeting was so fruitful and promising to the extent that the output would soon be visible for all to see.

“We are talking. Even just right now, we have gone on to set up a committee that will periodically review the issue of security, maybe once a month or once in six weeks, which will involve the two arms of government and the party.

“Major progress was made in this discussion, which is a meeting that lasted for over an hour and I believe Nigerians will begin to see traction. They’ll begin to see changes. You can be sure that concrete steps were taken in that direction,” he said.

Both Lawan and Gbajabiamila who said they discussed calls for the sack of the service chiefs with the president, however, failed to disclose the response of the president to the matter.
However, their responses showed that those waiting for the ouster of the service chiefs may have to wait for so long as nothing suggests that their exit is a matter for consideration for now.

He said: “Opinions are divided; the generality of the opinion is that the service chiefs should go, that was evident in our debates in the House of Representatives and in the Senate, but sometimes, you don’t want a knee-jack reaction.

“Many of us identify that something drastic has to be done. There’s also the school of thought that says since we are talking about banditry, kidnapping and murders, what have the armed forces got to do with that anywhere in the world?

“So, the question then arises that if he changes the service chiefs, does that address the issues of kidnapping and banditry? The Army, Navy and Air Force are outfits set up to tackle external aggression. It is the police that is set up for internal security, such as we are all witnessing.”

In his own submission over the matter, Lawan said instead of the sack of service chiefs, what should be paramount to the country now, is equipping the armed forces and the police with a view to ensuring that they perform optimally and as well ensure that their welfare is guaranteed.

“We discussed everything that matters as far as the issue of security of this country is concerned. We believe that it is imperative that we are able to provide those necessary equipment and welfare for the armed forces of this country and the police, to ensure that they are able to operate and perform efficiently and effectively,” Lawan said.

Speaking further, Lawan said they were in the State House to discuss the stunning debate the Senate had over insecurity in the country last Wednesday and the way forward.
According to him, even though the upper legislative chamber had constituted an ad-hoc committee over security challenges, they still deemed it fit to meet with the president to brainstorm on how to tackle the menace.
He also explained that the essence of the meeting was to come up with strategies and roadmap on how to guarantee security of lives and property in the country.

“We had the debates in the two chambers of the National Assembly last week and resolutions were taken and we have come to discuss with Mr. President on the way forward, what we feel about some of these security challenges and also to ask him what he thinks we should do.

“Even though in the Senate, we have our adhoc committee that will work and fashion out the specific measures we believe should be taken, but in the interim, there is need for us as a government to ensure that we provide a way out to tackle the security challenges. In the intermediate and the long term, we should be able to come up with some strategies, the road map to ensure that we secure the lives and properties of Nigeria,” Lawan said.

Lawan who also said the president as the leader of the country was worried about the security situation of the country, added that the deployment of technology to address the scourge of insecurity is also being considered.
According to him, the need to pay cognizance to the welfare of security operatives who risk their lives to fight criminals in the country also has to be given the required attention.

“Definitely, we are looking into technology but I don’t want to divulge everything discussed about security but I believe that the issue of technology is important. We need to minimise the casualties of our armed forces and therefore we need to apply technology and become more efficient.

“It is also critical that because we are dealing with human beings, you are asking the military, the police to go and fight insurgents, kidnappers and bandits, you also need to do something for their welfare. How do they live? where do they live? What is the condition of the schools for their children and so on and so forth? So, these are issues that are very important and could have very impactful outcomes when we are able to do the right thing and we will do them,” he submitted.