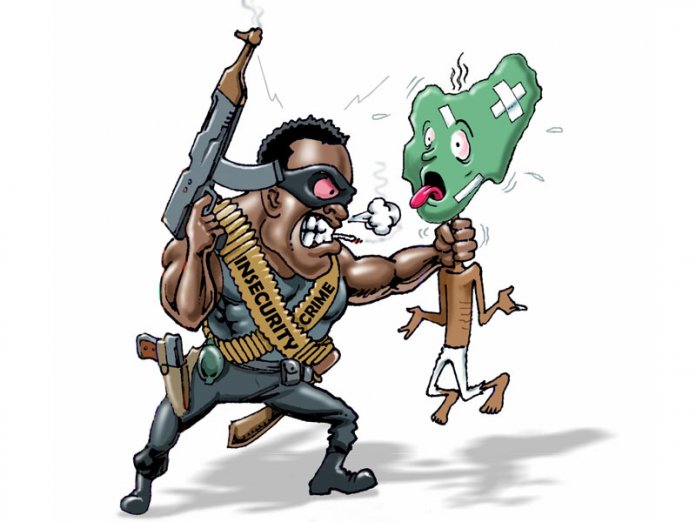 The latest report of the Conflict Armament Research (CAR) that some of the weapons used in the conflicts between farmers and herders in Nigeria were traced to “stockpiles of Nigerian defence and security forces” highlights the grave danger facing our country. According to the report by the global conflict research group, 148 different weapons were discovered and analysed, and those manufactured in Nigeria are the second most prevalent among them. This is another wake-up call for President Muhammadu Buhari on the urgent need to rejig the national security apparatus at a time most Nigerians are losing faith in the capacity of the state to restore law and order.

Indeed, the unrelenting assaults by sundry cartels of criminals that have awakened the primordial consciousness of several people in different regions of the country point to the grim danger that stares the nation in the face. It is also a vote of no confidence in the current security architecture that has often been accused of acting in ways that suggest lack of neutrality and commitment. More worrisome is that the CAR report could be interpreted in that light, with questions asked as to which groups are being supplied these arms in an increasingly divided nation.

On Monday, President of the Senate, Dr Ahmad Lawan advocated a restructuring of the security design in a bid to successfully tackle the general insecurity in the country. “The legislature and executive must be forthright in the fight against insecurity in the country as there are so many happenings destabilising communities. Apparently, the system is not working effectively and efficiently and we have to do something,” he said. Several of his colleagues, including members of the House of Representatives, have expressed similar sentiments in recent days.

While the Nigeria Police Force is constitutionally charged with the responsibility for internal security, the country has had to resort to the deployment of soldiers to restore law and order in majority of the states. Drafting soldiers to the streets for law enforcement – a duty for which they are ill-equipped – has also led to a situation in which they now behave like policemen by extorting motorists on the highway. On 6th January, the Governor of Borno State, Babagana Zulum, was enraged when he visited the Maiduguri-Damaturu highway where thousands of travellers were stranded because soldiers had barricaded the road and were collecting from passengers N1,000 per person in lieu of national ID Card.

It is noteworthy that the same military which ended the Nigerian civil war in 30 months, and later led ECOMOG to end civil wars in Liberia and Sierra Leone has been stranded by a ragtag collective of untrained sectarian zealots for more than a decade. Quite clearly, something is wrong in terms of doctrine, training, morale, strategic orientation and more crucially, leadership. Yet, despite strong indications that senior military officers and the fighting troops have lost trust in the current service chiefs, President Muhammadu Buhari has refused to make changes. This has only compounded the problem.

We have stated on this page on several occasions that the policy put in place to defeat the insurgency has become ineffective and it is draining the army of the goodwill of most Nigerians. For the past one year, Boko Haram terrorists and their Islamic State West Africa Province (ISWAP) counterparts have, through daring raids, attacks and seizures, put a lie to the much-touted view that the war against insurgency is ‘technically over’. In fact, the insurgents have exacerbated their asymmetrical warfare and executed successful attacks, and in the process killed hundreds of civilians and military personnel.

It ought to concern President Buhari that confidence in the security agencies is declining at a time when public confidence is rapidly shifting to sectional and regional security arrangements. This is a direct threat to our national cohesion. The hope that President Buhari, a former combatant, could restore security in the nation is being continuously eroded. The challenge now is for the president to quickly rejig the existing security apparatus to address the current circumstances. The urgent imperative is for the president to realise that a government that cannot guarantee the security of life and property for citizens and residents in a country has failed.