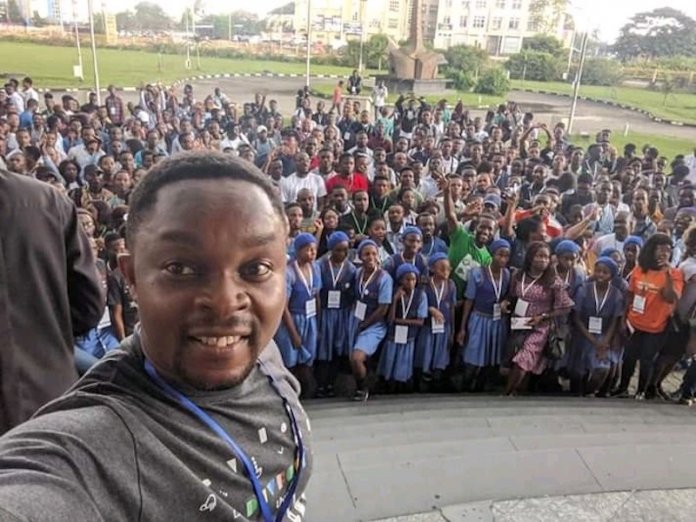 Maduabuchi Ubani writes that the DevFest, a community-led developer event hosted by Google Developer Groups around the globe, is not just focused on community building, but also presents people in the tech ecosystem the entrepreneurial mindset needed to progress in their line of work

Across the globe, many millennials are setting out to learn skills for the future. Most of them are defying different challenges in their environment to learn hard skills that will position them for the Fourth Industrial Revolution (4IR). Of course, many young people have moved from extreme poverty to comfort due to the hard skills they were determined and focused to learn.

But there’s a catch. Many young people only set out to learn hard skills alone. Most of them are unaware of different communities, ecosystem and tribes around the skills they wish to learn.
To these young people, they are better off on their own. That way, they can get to move faster in their learning process.

This same mindset is seen in Emmanuel Sunday, a young computer science undergraduate who learnt how to build applications on Android and IOS devices from some of his friends at University of Nigeria Nsukka (UNN).

Sunday spent most of his time coding, building online platforms and working with clients from across the globe on software programming challenges and innovations.

But while making good money through freelancing and referrals from his satisfied clients, Sunday had little to no idea about the tech community around him; he didn’t understand what the tech ecosystem meant, and he wasn’t even aware of the active players in the tech space around his environment.

“All I just cared about was to code and build platforms.” Emmanuel continued, “I had little to no interest in tech groups or whatever they called themselves. There are some tech platforms in my school, but to me, I just saw it that they were going to slow me down and there was nothing new for them to say. In my head, I was doing fine all by myself.”

However, the change of mindset came when he made it back home for a short semester break in Aba, Abia State. At home, a friend introduced him to a technology hub focused on training people in software development and powering businesses with technology just around his area.

At the hub, he got to see the amazing work that other young people were doing in the technology community. He also came to know about other techies, and alongside, saw the collaboration and growth taking place across the tech space in his community.

It was also at RAD5 Tech Hub that Emmanuel got to know about Developer Festival (DevFest) by Google Developer Group (GDG). Before now, he had no prior knowledge of any major event where software developers, members of a tech ecosystem alongside technology enthusiasts could meet up, network and share knowledge.

“It was as if the veil was removed from my face. Everything made sense all of a sudden. I can’t even begin to imagine the opportunities that must have slipped me by. But then again, this isn’t time for blame game. It’s a privilege to be linked up with other active players in the tech environment. Now I can run faster.” Sunday explained.

In an official online statement, DevFest is described as a community-led developer event hosted by Google Developer around the globe. Google Developer Groups (GDGs) are focused on community building and learning about Google’s technologies.

Every DevFest event is tailored to the needs of the hosting developer community; the event covers multiple products such Android, Google Cloud Platform, Machine Learning, Mobile web etc.
The event provides the conducive environment for local developers and tech enthusiasts to teach, learn, code and network.

This year alone, DevFest took place in about 35 cities across Nigeria. In Lagos State alone, more than one thousand eight hundred beginners , intermediate and expert software developers converged to listen to speakers sessions, trainings with speakers from Google, Women Techmakers Ambassadors and speakers from other companies on topics around Google Developer platforms/products.

Although DevFest seems to hover around developers and people in the software development space, the event has over the years spread out its wings to accommodate other players in the tech industry who play significant roles to power the tech ecosystem.

It is this accommodation that Ada Nduka Oyom sees as the integral part of any community that wishes to be sustainable and scale over time. As the Google Developer Relations Ecosystem Community Manager, Oyom sees the DevFest platform as an opportunity for people to not only make their way into the tech space, but also for techie people within an environment to learn from each other and grow.

At Devfest Aba recently, Oyom aptly pointed out that “the tech community is a very versed and highly accommodating community for anyone to thrive in their chosen fields of endeavor. And so, it is platforms like DevFest provided by Google Developer Groups that provide the ground for people to move from lone rangers into active contributors to the tech space in their community.”

Apart from lone rangers coming out of their shells to share their knowledge and insight, it is events like DevFest that provide an environment for young people, especially women to be encouraged in chasing their dreams and aspirations.

Before now, young ladies across major cities in the country were being dissuaded from pursuing a career in technology or even tech-related fields. Most times, the male in the family is encouraged to go learn computer skills even when it is evident that the girl-child shows more potential than the boy in that area.

It is this lack of role models for young girls that Mr. Ihueze Nwobilor contends with on a daily basis. As the South-east Programme Officer of Paradigm Initiative, a Non-governmental Organisation that trains young people in underserved communities on entrepreneurship, personal development, financial literacy and digital skills, he comes in contact with many ladies who seem to have handed over the job of being tech savvy to the male counterparts.

“We see young ladies who have the potential to do amazing things with their lives, but then, the bulk of the work is to rid them of the mentality that tech is mostly for boys alone.” He explained.

Back in 2017, Nwobilor ensured that majority of the girls at the centre attended DevFest Aba. The result it had on them was phenomenal. “These girls at the centre attended DevFest 2017 and saw other young girls their age speaking about their journey in technology. In 2017, they saw the likes of Ada Nduka Oyom, who also made it back to Devfest Aba 2019, mount the stage and give an amazing presentation.

“I can tell you that after the DevFest event in 2017, our work at the centre was made a whole easier because these young ladies got to see things for themselves. They wanted to be like the young people they saw on stage. It was really a defining moment for them. And for us, it has been a humbling experience to give them such kind of exposure to witness the amazing things young people are doing.” He enthused.

While tech events like DevFest provides the exposure for young people to dream bigger, aim higher and achieve even the impossible, it also presents people in the tech ecosystem with the entrepreneurial mindset needed to progress in their line of work.

It is this mindset that makes the average techie to understand the art, science and business side of the skills they have. And when they are exposed to these entrepreneurial line of thought, they begin to see things differently.

As a software developer, John Nnanna Oji doubles as the Google Developer Lead Aba, and the Co-founder of Rad5 Tech Hub in Abia State. He sees techies with an entrepreneurial mind as valuable assets.
This is because when these techies join different teams in different organisations, they are not just the everyday software developers and designers who sit behind their laptops and build complex lines of codes. Instead, they are more like problem solvers who possess the ability to work around a problem prevalent in an environment and use their skillset to provide a lasting solution.

“The difference between a techie and an entrepreneurial techie is their approach to problems and how to solve it. Almost anybody can proffer solution to an issue, but very few can provide an innovative solution to a problem.

“This is one of the reasons why events like DevFest hold every year across major cities of the globe. Yes there is need to build a strong tech ecosystem. Yes there is need to educate people on the fourth industrial revolution and the changes it will bring. But then, there is a need to raise innovative, creative and entrepreneurial minds that won’t keep doing the same thing and expect a different result.” He explained.

As the DevFest revolution keeps sweeping across different communities in Nigeria and Africa as a whole, one can see the light at the end of the tunnel for the teeming young minds and the continent as a whole.