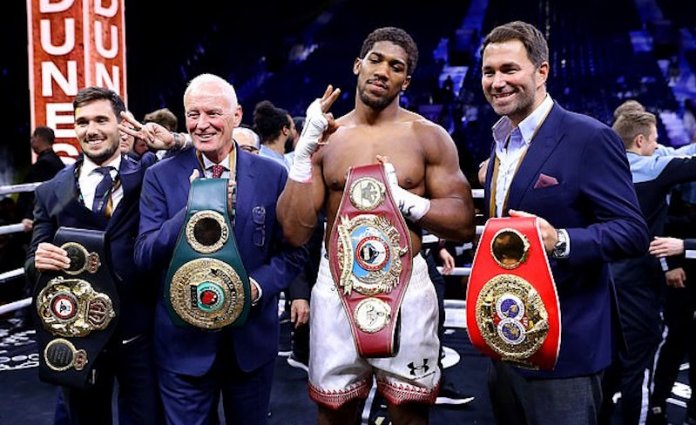 Anthony Joshua’s promoter Eddie Hearn has suggested a potential fight with British rival Tyson Fury would not go ahead in the UK.

There is massive demand for the two British heavyweights to battle it out in the near future but Hearn has ruled out the UK hosting the fight because the government doesn’t ‘invest’ in mega events.

When asked whether the possible British showdown would take place in the UK, he told iFL TV: ‘No it won’t. I can’t see how it does.

‘For me, it should happen in the UK and if there’s a way to do it, we’ll do it. But the problem is the money that could be generated.

‘Because the government here don’t invest in bringing mega events to the UK, they don’t necessarily need to.

‘But other countries whether it’s Nigeria, Congo, China, Saudi, Qatar, Abu Dhabi, their government, their tourism department, has a huge pot of money that they’re looking to bring major events to showcase their country to the world as a tourism destination.’

The decision to hold Joshua’s rematch with Andy Ruiz in Saudi Arabia came in for plenty of criticism from human rights groups, accusing Hearn of helping the state with ‘sportswashing’, the practice of using a big event to improve reputation and change perception of a country with a poor human rights record.

The promoter argues that the discrepancy in money available to his fighters makes it a simple decision, saying it comes down to getting the best payday possible.

‘Someone messaged me and said, “For f***’s sake Eddie, Saudi Arabia, who cares about the money? You’re so greedy, just do it in England”.

‘If it was the difference of £10m each… but it’s not, it’s double to go somewhere else. And it can’t be ignored. Especially a fight like that, it’s a one-off.’