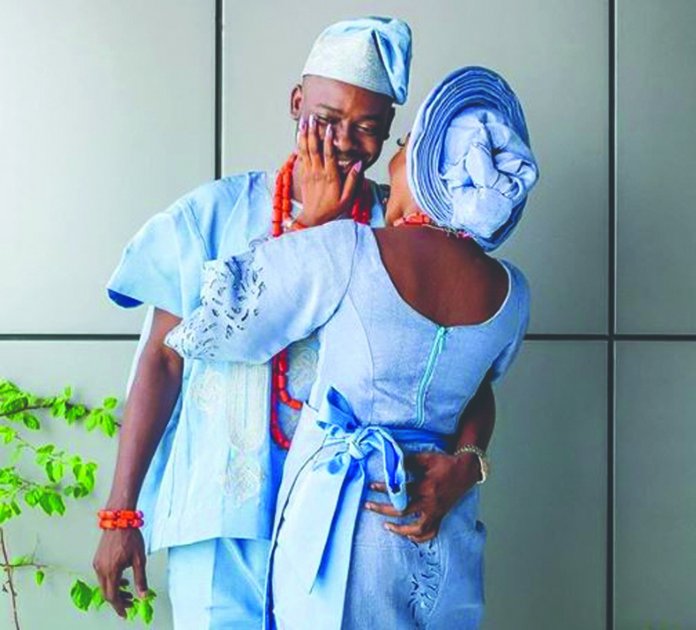 One year into marriage, music stars Adekunle Gold and Simi have become role models to other couples with the way they keep their marital matters private and how they live on their own terms. The singers and staunch superstar couple celebrated their first wedding anniversary with a cute photo and beautiful exchanges of words, writes Ferdinand Ekechukwu

As singers and celebrity couple Adekunle Gold and Simi marked their first wedding anniversary this week, there are possibly those who still doubt the marriage and would pass whatever exchanges they both share on this occasion as makebelief. This is not far from the fact that the lovebirds have had their affair under the wraps, despite their celebrity status and public attention, until the news of their surprise wedding a year ago.

Except for a footage which was secretly released by an OAP guest, as they pleaded with invitees to not take pictures or videos at the ceremony, their wedding became the talk of the town as they never released official photos or videos from the wedding ceremony until a video to one of their songs was shot and it was sync as part of the work. Many were amazed and even found it difficult to believe as the ceremony was devoid of the usual paparazzi often associated with such celebrity weddings. Simi and Adekunle Gold`s wedding photos were not made public.

Their fans even took to social media to plead with the couple to release photos from their wedding. Their marriage was shrouded in the most extreme secrecy and it attracted mixed feelings from fans and followers on social platforms. Coated comments followed: “One major lesson I learnt from Adekunle and Simi’s wedding is ‘secret is security and security is victory.’ Your private life should be your secret life,” remarked @Nadirichy.

Adekunle and Simi kept their relationship on a low till they got married and have also been able to keep their wedding pictures on a low too. These guys know how to do secret life well.” How time flies!

One year after marriage, the music stars have become role models to other couples with the way they keep their marital matters private and how they live life on their own terms. On Monday January 13, 2020, Adekunle Gold took to his Instagram page to announce their one year wedding anniversary with a cute picture of his wife, Simi, braiding his hair. He went on to caption the photo with romantic words in which he showered accolades on his wife. “One year in and I can’t even begin to say how blessed I am that it’s you I am doing this love something with. You amuse me, you make me laugh; you are so beautiful, I am lucky I get to love you forever. Here’s to more beautiful memories together, doing great exploits and living our lives on our terms. Love you forever babe.”

Simi also took to her Instagram page to celebrate Adekunle Gold on their wedding anniversary. She gushed in a pretty lengthy text, referring to him as “Pretty Baby”. Simi thanked Adekunle Gold for being a good husband. “Pretty Baby, the very thing that you mean to me, I doubt you’ll ever fully understand. I don’t like to share our best moments because they belong to us – so people might never even know the level of your special. It’s a really high level that is higher than other levels. No one is more in sync with me than you.

“I love how you’re mindful of me. Nothing’s perfect. Not even with your Ikotun background – but I love how you deliberately want to be better. You will see something inside film and ask me at 2am how you can be a better man for me. Lol. So cute a man. Before we said I do, 95% of the advice I got was ‘Endure’. I was stumped cos I’ve never been able to relate. Endure? Forever and ever? Like till the end of your days? Lol. Quite rubbish. Thank you for never ever being someone I’ve ever had to endure. Don’t like it much when people ‘couplegoals’ us – cos as far as I’m concerned, we, i.e me and you, are on a personal journey.

“Our ups, our downs (Olorun o ni je ka rogun down), our growth, our learning and unlearning, our love (aww) is our story. Everyone’s standard should be their best self. Thank you for being someone that makes me want to be my best self. Moruf, thank you for year one. They said it’s normally hard. Again, I can’t relate because I loved it. I love you. I pray year two is even better by God’s infinite mercy and grace and love. I thank God for standing with us and giving us sense. And I thank you for being a man that makes loving you worth it. My beautiful dreamboat, my fellow feminist boyfriend, my husband, Ife mi, onitemi, the love of my life. I will continue to eat your work in the eye of carton. To all the forevers we will spend together.”

Adekunle Gold and Simi’s relationship has been an item of intense interest to the public after the two artistes commenced their careers. Both singers were together for a very long time even before their career flight. At the beginning of their career, the duo kept their brands separate and were hardly photographed together.

Given the heavy spotlight on celebrity couples, this decision paid well for Simi and her boo as they were able to build their careers outside the spotlight. The longtime lovers who have been together for almost a decade tried their best to keep their love life private, their fans waited impatiently for them to go public as a couple. Despite all that was seen, said, suggested, and guessed about them, there was never a confirmation from the pair, and not even a straight denial.

Apart from the chemistry and all the affectionate, almost sexual embraces from them during their many joint performances, not much could be said about their relationship. Until an event of Sunday December 8, 2018 confirmed their status as Simi told Adekunle Gold, ‘your love is overwhelming’ after they shared a kiss on stage at Balmoral Convention Centre, Federal Palace Hotel, Victoria Island during her concert tagged ”Simi Live in Lagos”. It then followed with a secret engagement party attended by close knit friends and family members of the couple.

These two further threw a surprise last year when they got married in the most private celebrity weddings in modern times. The couple had their private traditional wedding on Wednesday, January 9, 2019, at Victoria Island. Their marriage was witnessed by a private audience of about 300 close family members, close friends and industry colleagues. They went on to have their white wedding at the popular Ilashe beach on Thursday, January 10, 2019.

Unlike the traditional wedding which had a larger turnout, the white wedding was attended by a selected 300 guests. Adekunle Gold had in an interview revealed that he would love to tie the knot at the beach. Hence the beach wedding didn’t come as a surprise to many as the clip of the interview surfaced online after it became public knowledge to those in the know that he and his sweetheart would be tying the knot.