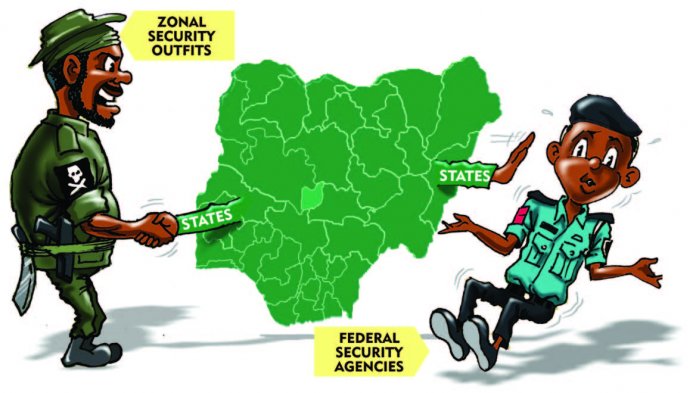 While we are still grappling with the widespread involvement of the military in internal security duties across the country, a new anomaly has taken route. Geo-political collectives of states have embarked on the establishment of security outfits. While the idea may have started in the southern part of the country, it is spreading to the north in what appears a vote of no confidence in the current security architecture and may have disfigured the current structure.

On Thursday in Ibadan, states in the South west launched a regional internal security outfit named ‘Amatekun’. The immediate impulse that informed the birth of this outfit was the spate of killings, kidnappings, robberies and brigandage waged in the states in question, by sundry cartels of roving criminals. These unrelenting assaults had awakened the collective consciousness of the people of the region to a primordial sense of group self-preservation. In the South east, individual states have since floated their own internal security outfits ranging from hastily assembled vigilantes to structured organs empowered by state legislations. Abia, for instance, has created a ministry of homeland security purely for the purpose of protecting the state from ‘external’ security breaches and threats. The ministry has since commenced the recruitment of cadres and officers.

On Thursday, Governor Aminu Masari of Katsina State and the chairman of Northwest Governors’ Forum said the regional security initiatives appeal to him. “We have a lot to learn from them (the South west). I will call a meeting of the states affected by insecurity to see what they are doing and how we can borrow from them,” said Masari who expressed regret that “criminality has now come to the cities and towns from the forests; the criminals in the cities now invite the bandits from the forest to kidnap for ransom.”

While the geo-political blocs insist that their internal security outfits are established to complement the efforts of the formal security structures of the police and military, the inconvenient truth is that these formations are a mere restatement that the existing federal agencies have failed in their duty to protect lives and livelihoods in Nigeria. Of grave concern is the perception that the federal security agencies have acted in ways that suggest lack of neutrality and commitment.

It is disturbing that 50 years after the civil war ended, our national political order has reverted to the pre-1966 atmosphere of geo-ethnic solidarity at the expense of a sense of pan Nigerian unity. This is sad. However, the new trend also underlines the limitation of federally controlled police in securing a large and complex national space. The long-standing clamour for state police is finding indirect expression in the outbreak and grassroots popularity of these zonal security formations.

The risk we run with the entrenchment of the new zonal security outfits is first that they do not have constitutional legitimacy and are therefore bound to come into operational conflict with both the police and military. There is of course the perennial risk that these outfits could easily be pressed into the political service of governors and influential politicians. We already have an unhealthy situation in which the official federal security structure is often compromised at election time in favour of the incumbent power holders with the net effect of degrading the prospects of genuine democracy.

Perhaps the most dangerous meaning of the rise of zonal security is the possibility of a loosening national cohesion. Once citizens begin to feel more secure in their geo-ethnic localities, the much needed national unity will begin to wear down. And once the national defence and security apparatus also begin to command less trust and confidence than the local formations, the risk that political loyalties will balkanise is quite high. Whatever may therefore be the justifications for these outfits, we should not allow our temporary internal security challenges to so overwhelm us that we encourage Nigerians to scuttle back into the embrace of primordial ancient tribal loyalties.

That would be a regrettable legacy for President Muhammadu Buhari to bequeath.

Quote
While the geo-political blocs insist that their internal security outfits are established to complement the efforts of the formal security structures of the police and military, the inconvenient truth is that these formations are a mere restatement that the existing federal agencies have failed in their duty to protect lives and livelihoods in Nigeria