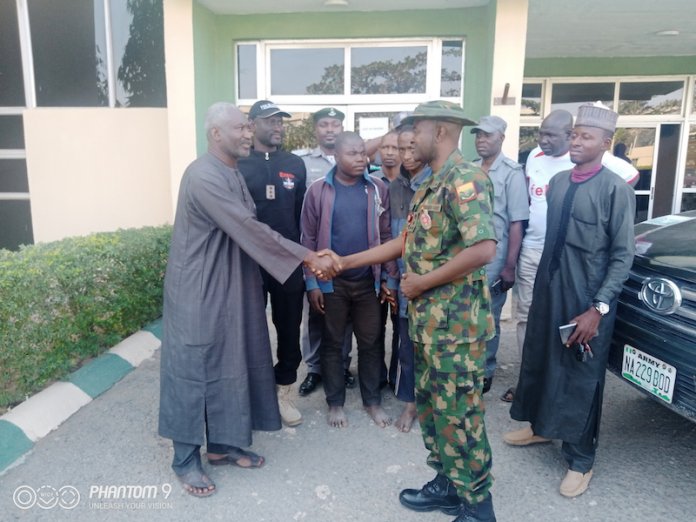 Bandits on Sunday released two kidnapped Nigerian Customs Service (NCS) officers to the troops of the 17 Brigade of the Nigeria Army in Katsina State.

The bandits had on January 8, 2020, abducted the Customs officers at Mallammawa town in Jibia Local Government Area of the state.

The acting Commander of the brigade, Brigadier Bello Idris, while handing over the victims to officials of the NCS Area Command in the state, said the bandits released the victims unconditionally.

He said the ongoing intensive Operation HADARIN DAJI and 8 Division Nigerian Army which commenced in the past few days with attacks at several bandits’ hideouts, had led to the neutralization of several bandits and forced many of their leaders to seek for peace.

Idris said: “The bandits who earlier kidnapped two Customs officers on 08 January 2020 at Mallammawa town in Jibia LGA of Katsina State have called for peace.

“The bandits after testing the might of the Nigerian military have unconditionally released the two Customs officers to headquarters of 17 Brigade in the morning hours of today (Sunday) 12 January 2020.

“Some bandit leaders who sent messages through emissaries to the acting General Officer Commanding, 8 Division Nigerian Army, who oversees operations in Katsina and Zamfara States, have indicated readiness to embrace peace without any conditions attached.”

He affirmed that the military would continue to remain resolute to ensure complete disarming of bandits before considering the peace deal as announced by the various state governments in the North-west.

According to him, “Troops of the Operation have continued with what the commander calls ‘Mop Up Ops’ in order to clear all areas of bandit camps to ensure the release of all hostages.”

Meanwhile, the freed Customs officers have been taken to the Federal Medical Centre (FMC), Katsina for treatment.