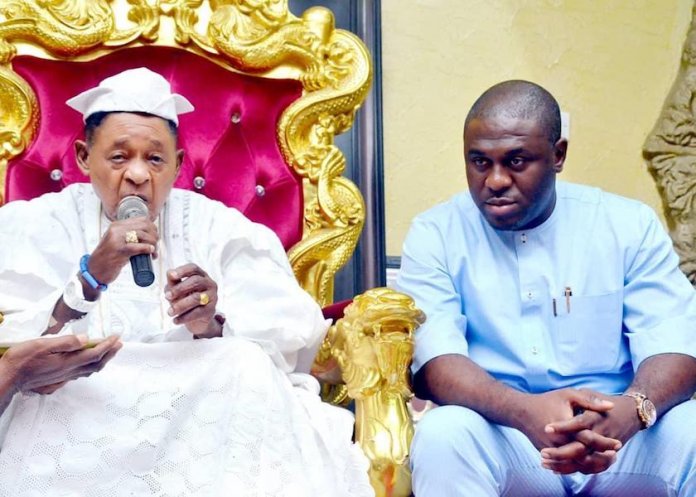 His Imperial Majesty, Oba (Dr.) Lamidi Olayiwola Adeyemi III, Iku Baba Yeye, Alaafin of Oyo has conferred the Chieftancy title Akosin of Yorubaland on Habeeb Okunola, MD/CEO TILT Group of Companies Limited, and Founder of Habeeb Okunola Foundation.
The conferment of the Chieftancy title was reached after the Alaafin consulted the Oyomesi,  who are the King makers and traditional cabinet of the Alaafin. After rigorous exploration into the personality and activities of Habeeb Okunola, he was found a worthy and thorough bred Yoruba son who is culturally inclined to wear the toga of the Yoruba royalty and traditionally oriented to promote the Chieftancy institution of Yorubaland.
The Chieftancy title, Akosin of Yorubaland is interpreted as the first person in Yorubaland to perform an extraordinary feat; an illustrious accomplisher/ leader worthy to be celebrated.
The prestigious title which is deeply rooted in the  origin of the Old Oyo empire, bestows it’s holder enoromous legitimate authority across all the Yoruba Kingdoms.
The Akosin of Yorubaland Chief Habeeb Okunola has for a long time remained a frontline business leader of international repute committed to fostering grassroots development in underserved urban-slum and rural communities across Africa.
Chief Okunola is a shrewd serial entrepreneur and global philanthropist; whose work and charitable activities across Africa have distinguished him as one of the leading entrepreneurs under 40, in the continent. He sits atop a major conglomerate and financial empire with stakes in real estate, construction,l, energy, engineering, agriculture, media and technology. He is a certified businessman of international repute, whose experience in conceiving business transactions has given him access to Presidents, Prime Ministers, and leaders of International organisations. Over the last decade, his philanthropical gestures has impacted millions of undeserved poor people and communities across, Africa most especially in the area of Financial Inclusion, Education, Health, State Security & Prison Reforms.
This is a testimony to his favourite saying, “empowerment is proof of wealth”.
Having graduated with a degree in Philosophy from the University of Lagos, Chief Habeeb Olalekan Okunola has since attended several executive leadership and management programs at Harvard Business School and numerous institutions home and abroad.
Official installation ceremony will hold at a date to be announced soon.