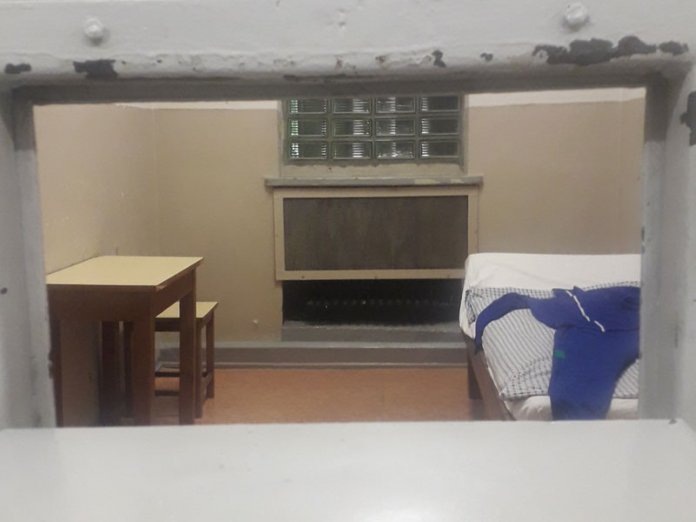 A guided walk through the Stasi Prison, a historicalmonument that was preserved on the heels of the fall of the Berlin Wall, was a spine-tingling adventure, Yinka Olatunbosun reports

Tucked away in the outskirts of Berlin, it took a 30-minute ride on a tram from Alexanderplatz to reach our destinationwhich was Stasi Prison. By 4pm, the sprawling view was already fading into the dark skyline as we approached it as a team led by Christian Jakob, a seasoned journalist at a German National Newspaper, Die Tageszeitung otherwise known as Taz.

With thanks to Taz Panter Foundation, journalists who participated in the 2019 Taz workshop for Nigerian journalists in Berlin were on their last tour in the week-long programme, with many quietly enduring the diminishing returns of several walks to and from the rail stations, biting cold and for some, sheer homesickness. The thought of a complete tour of the terror-tale facility was quickly botched to fit our schedule.

As you may know, Stasi Prison was the place where political prisoners were kept during the cold war with the German Democratic Republic split into East Germany controlled by the Soviet Union and the West Germany, controlled by the British, American and French government. The prison was considered as one of the most effective and repressive police intelligence systems in history. It was run by the Ministry of State Security also called Stasi in East Germany.

The sounds of our shoes on the floor of the deserted prison yard was more chilling than the weather and one of the first exhibits that caught our attention was the Stasi Secret Prison Van. Our guide, Marcel Van Hamersveld allowed us to take photographs as he recounted how the van installation was a tool of terror. Disguised as bakers’ or florists’ van, any one who was picked up would be driven around for three to four hours until the individual couldn’t tell if he was still in the same city or country.

“Here, they would take your shoes away from you, not for your comfort but to make sure that you don’t make a single noise. One of the few things you’d be allowed to do was to pace up and down your cell,” said the guide with a tone of urgency. Occasionally, he would tease us. “You can go into the cell, don’t worry about being locked up,” he said, with a faint touch of amusement in his eyes that soon gave way to a grim look.

“On the outside, the Stasi had been keeping an eye on you for months to know everything about you,” he recounted. In a curious way, the quiet surveillance technique is still a part of the Germans’ daily lives as they board trains and buses mostly without physical presence of a ticket inspector, but an eye painted on the train to remind you that you are being watched.

Back to the sad reality of being imprisoned by the Stasi, the tour guide painted a picture that seemed familiar to petite individuals at NYSC camps.

“You’d never get fitting clothes to wear,” he said as he tossed the question of why the prisoners would, in the midst of the misery, got a luxury of a mirror in each cell.

“The mirror is there to make sure you have nothing positive to look at,” he said.

He stood behind the door to demonstrate how the prisoner wasoften watched through the door scope. Widening a big eyeball in the hole, he relived the sinister spying that was the order of the prison with such dramatic accuracy and dark humour that evoked a chuckle from an imaginative mind.

Stasi Prison was regarded as the equivalent of Robben Island in Apartheid South Africa and Auschwitz in Poland during the World War II era. The prison was closed in October 1990 at the fall of the Berlin Wall and the notorious prison had sincebecome a memorial and just a few miles down the road, the Stasi Museum which is a storehouse of artifacts and dark memories.

The cell walls are lined with wires that connect to the central alarm system and prisoners were not allowed to see themselves. The isolation was so traumatic that some inmates reportedly looked forward to interrogations, marked by physical and psychological violence, which were the only source of human contact. In the old Stasi Prison, buckets were used in lieu of toilet seats.

The prison is a reminder to Germans and visitors from all over the world of a political oppressive past which is still an unwanted ingredient on many democratic societies today.Preservation of such historical monuments plays a key role in reinforcing in our psyche the history that should never reinvent itself, unless in an art form.