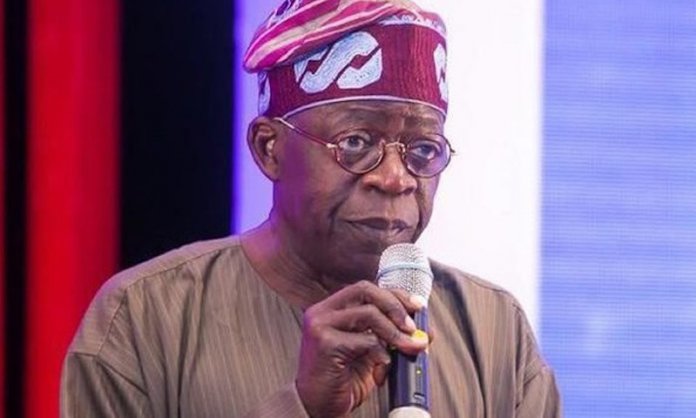 •Vouches for Buhari not to nurse third-term agenda

National Leader of the All Progressives Congress (APC), Senator Bola Tinubu, yesterday described the agitation for presidency in 2023 in this early hours of President Muhammadu Buhari’s second term as wrong and untimely.

He told State House reporters in Abuja after holding a closed-door meeting with the president that anyone who had the interest of the country at heart would not be discussing issues bordering on the 2023 presidential election now.

Tinubu, while responding to a question on his perception about the clamour by some northern politicians to retain presidency in the North at the expiration of Buhari’s tenure in 2023, said all that every well-meaning Nigerian should be pre-occupied with now is the delivery of democracy dividends to citizens.

“That time is not now. We have just finished one election and Mr. President is busy sorting out the budget, working for the people of this country. Of course, restlessness of politics is going to be there, but any lover of this country will not talk about the succession plan yet. That’s the truth. Concentrate on working for the country; help the president to help the country. There’s nothing more than that,” he added.

Tinubu also spoke on Buhari’s repeated denials of third term ambition, saying anyone who had worked with the president knew that he would never attempt to alter the constitution to elongate his stay in office beyond the constitutional stipulations.

He accused those making the insinuations of a Buhari Buhari third-term agenda as detractors who thrive on suspicion.
He stated that he could vouch for Buhari as a man of courage and character who would never nurse such an ambition.

However, he said even though he could go anywhere to argue with anybody against alleged plan by the president to run for third term in office, it was better that he’s personally denying the insinuations as he urged Nigerians to believe him.

“Any reasonable politician who had worked with President Muhammadu Buhari will know that he will not (tamper with the constitution). Detractors are always suspicious and will make accusations, but I was in the trenches, in the struggle for democracy.

“I was in the trenches and in the opposition with Muhammadu Buhari, till the third-term agenda of a former leader of this country failed. I know he will never. He has the courage and the character to refuse such a temptation even if offered to him. I believe in him and I believe Nigerians should also believe in him.

“He doesn’t need to say it to me, I’ll argue it in the corner and everywhere they bring such a thing up. However, it’s very good to hear it from him. I say congratulations to a man of character and integrity. The challenge of turning the ship of this nation around is a continuum and a continuous effort and that is what we should get ourselves concerned with,” he said.

He described the president’s new year message as apt, noting that the government has a responsibility to work for the people and progress of Nigeria.