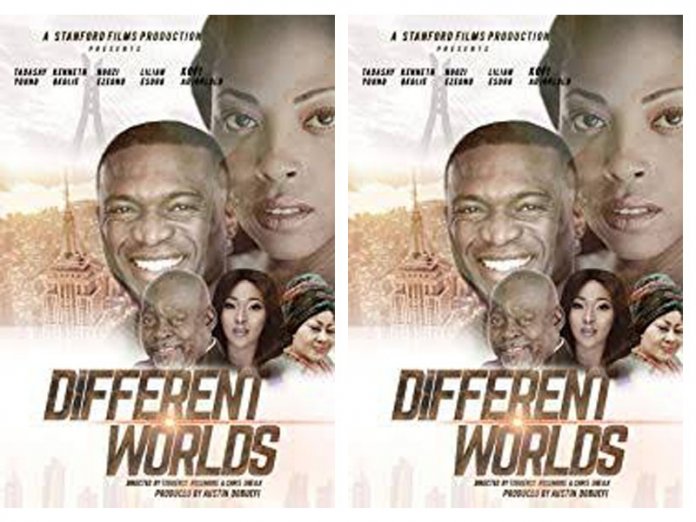 Nigerian film producer, Austin Ogbuefi, has revealed that everything is now in gear to distribute his Different Worlds movie. The film, which premiered on December 21, at Genesis Cinemas, is set to hit the Nigerian cinemas from January 3, 2020.

One of the stars in the movie, Kofi Adjorlolo, expressed his joy in being in a movie like this. This is the first time he is collaborating in a movie collaborated by Nollywood and Hollywood practitioners.

Kofi said this is an African movie and a blessing to the continent. He believes his people and fans in Ghana will embrace the film once it hits the Ghanaian Cinemas.

At a press conference, the CEO of Stanford Film Production company also broke the news of how the film attracted the attention of Eddie Murphy and his distribution company. He noted that while Blue Pictures is in charge of the Nigeria distribution, the film will be distributed globally by Murphy Distribution.

Ogbuefi who had earlier shared his U.S premier experience, noted that, “what I discovered from the U.S premiere is that Americans love Ngozi Ezeonu. A lot of them want to see her. They were all over her during the Different World premiere, taking pictures from left and right at the event. Others from the panel session of the premiere said they want Mama G. It was surprising to hear Americans demanding for Patience Uzokwo and even calling her by her stage name”.

Highlighting what should be done to create boom for the movie sector, he said, “Here in America, movie producers get tax incentives. If you shoot a movie here in America (in some of the cities or states) they give you tax incentives. From the money that you spent to make the movies because they know that when you make this movies, you are providing employment, job for the people, for the actors, so in America that’s how they think”.

Emem Ufot, who also played a role in the movie said this is one of the best project thus far and jokingly appreciated the fact that a project he featured in was seen and applauded by the great Eddie Murphy, “I could be acting with Eddie Murphy soon” , he added.

He acknowledged Different Worlds movie as a big budget project. “I have lost count of the budget. I am still spending for promotions and publicity. It’s the biggest project I have done up to date and of course the shooting in America was very expensive. Nigeria too is expensive as well but shooting in two different countries, you know of course makes it tough because I have to fly some of the actors to Nigeria and pay for their hotels, flights and all that. And all other expenses involved, I had a lot of crew in the United States and a lot of locations”.

Different World is the story of an African prince (Kenneth Okolie) coming to America to celebrate his birthday. Before leaving Africa (Nigeria), he was already bethroted to a lady as it is the customs of the land. While he was in America, he ran into a lovely New Orleans lady and they started a love affair parallel to his Nigerian sweetheart (Lillian Esoro).