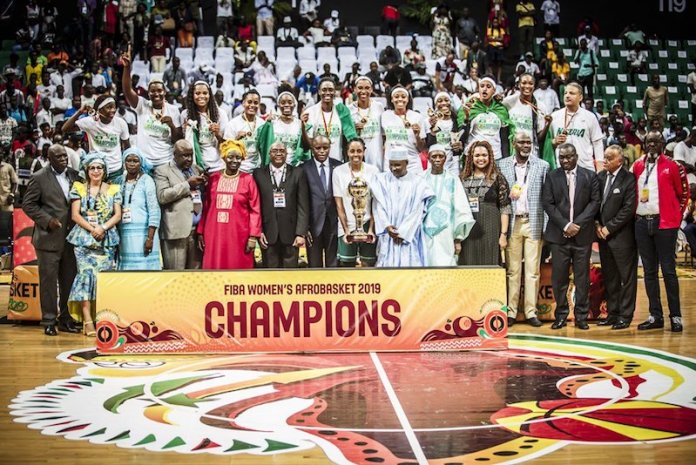 Never has Nigeria’s sports been in the throes of dying as witnessed in 2019. It was indeed a year that almost everything went wrong for the sector. From football to athletics and all the Olympic sports (save for Wrestling and Basketball), it was indeed one failure to the other. The case of track & field was even worse as administrators of the Nigerian federation introduced the bizarre angle of spending the money that was wrongly paid into its account in the manner of what in locally parlance is called Yahoo Yahoo.

The outgoing year started with chaos in the domestic Nigeria Professional Football League (NPFL) with hooliganism in some of the league venues.

Two events stand out in the Match-day 1 and 2 of the NPFL. The fight in Jos between Plateau United fans and FC IfeanyiUbah was one while the clash in Sagamu with Remo Stars owner involved were fore runners of what to expect in the season.

The bottom line was that fans wanted business as usual to continue with home teams winning at all costs. It therefore was no surprise that despite stringent measures, including heavy sanctions by the League Management Company, the organisers of the topflight domestic league, such malfeasance continued till end of the season. The most notable towards the end of the previous season was Kano Pillars’ rampage at the Agege Stadium.

Away from domestic football, the national teams fared no better beyond the bronze medal secured by the Super Eagles in the Third Place match of the 2019 Africa Cup of Nations in Egypt last June.

Although the bronze came as a consolation to Eagles who missed qualification for two editions of the continental football showpiece back-to-back, Nigerians wanted something more than that.

Super Falcons who maintained their dominance of female football in the continent, defeating South Africa in penalty shoot out in Ghana to become African champions for a record ninth time in December, 2018, failed at the World Cup in France.

Falcons crashed after losing 0-3 to Germany in a riveting match that tested both sides will.

A questionable VAR decision allowed one of the goals that sent Nigeria packing from the competition. Falcons under Coach Thomas Dennerby’s watch played with great resolve and showed skill, but they had trouble converting chances against a German side that never really looked unbeatable.

The girls however met the goal of progressing from the group stage for the second time, since losing in the quarterfinals to Brazil in 1999.

Apart from the bronze recorded by Eagles at the senior level, it was free fall in virtually all the age-grade tournaments Nigeria featured in.

From the Under-17 to the Under-23 in both the men and women categories, it was one agony to the other. The most harrowing was Nigeria’s failure to qualify for the 2020 Olympic football tournament in both the male and female categories. The most scandalous was the Super Sand Eagles whose woeful performance at the FIFA Beach Soccer World Cup in Paraguay made the NFF to suspend further participation in the tournament till the situation of the game has received a lift for good.

What is giving consolation to football followers in the country is the NFF Bill at the National Assembly that has received final passage and only waiting Presidential assent. Perhaps, it is likely to bring a new vista to the Beautiful Game and put an end to the many frivolous cases in courts dragging back the progress of the game here when finally signed into law.

The situation in athletics didn’t fare any better. Apart from the fact that the Shehu Ibrahim Gusau led AFN has abandoned all youth programmes he met on assumption of office two years ago, there was no real attempt at ensuring that there were competitions to keep the home-based athletes busy. Nigeria had to solely rely on the USA-based athletes like Tobi Amusan, Divine Oduduru, Ese Brume and Blessing Okagbare who is already out of college. There are others in the throws and jumps that AFN always look up to to bail out the country.

Signs of a poor outdoor season ahead was signposted by the failure of the country’s athletes at the World Relays in Japan. The event was a qualifying meet for the 2020 Olympic Games in Tokyo, Japan.

Perhaps as a result of the $130,000 IAAF (now World Athletics) scandal involving the Nigerian federation, the organisers treated the Nigerian contingent like ‘Third Class” citizens, accommodating them in the outskirt of the city. The result of that shabby treatment was a woeful performance and failure to record even a single win.
It took the intervention of current Sports Minister, Sunday Dare, to clear the mess left behind by his predecessor, Solomon Dalung.

Even with the payment of the missing IAAF money without punishing those who misappropriated the cash, it was not enough to push Nigerian athletes to the podium at the World Championships that held in Doha, Qatar. Rather, Nigeria was in the news for the wrong reasons.

Both Okagbare and Oduduru who notified the AFN Technical Director, Sunday Adeleye, of their intentions not to participate in the 100m event found their names on the start list which indicates a final confirmation of their participation was done.

Both athletes skipped the short sprint and were on the verge of been thrown out of the competition. Anyway, with the matter resolved through the intervention of the Sports Minister, both athletes were restored to the 200m but they failed to reach the final talk-less of reaching the podium. Nigeria returned from the Worlds empty handed.

With no medal from anywhere and just months away from the 2020 Olympic, the AFN is not thinking of how to ensure that Nigeria did not return from the Games empty handed the way Team Nigeria did from Rio 2016, instead, the federation is engulf in crisis.

Gusau has been suspended with his deputy, Olamide George acting until the panel set up to try him for the several infraction noted against the former House of Representatives are cleared. Of course, Gusau and his followers have gone ahead to claim autonomy from the Federal Ministry of Youth and Sports. How they hope to survive remains a mystery for watchers of Nigerian track & field.

So far, Nigeria athletes like Raymond Ekevwho , Usheoritse Itsekiri and Oduduru have secured qualifications for the 100m in Tokyo while Okagbare (100m and 200m), Amusan (100m hurdles), Brume (long jump) and Chukwuebuka Enekwechi (men’s shot put) are all Tokyo bound. More are expected to make the grade in the New Year.

In other sports, Nigeria’s D’Tigress successfully retained their Afrobasket crown, defeating the home country Senegal 60-55 to win a second consecutive title in what was a pulsating encounter.

Playing in a packed Dakar Arena, the Nigerian ladies had to contend with majority of the 15,000 fans who were firmly rooting for the host country. It was a tough hurdle for the Coach Otis Hughley side, but they showed mental strength to emerge as champions.

It was Nigeria’s toughest test in the tournament, and they toiled hard to earn the victory.

The victory also means Nigeria’s passage to the Olympic Qualification Tournament. Nigeria will have to navigate past World Number One, United States of America, Serbia and Mozambique in the battle to secure qualification for the 2020 Olympic Games in Tokyo.

D’Tigress will play in Belgrade after being drawn in Group A.

A total of 10 teams will join USA (World Champions) and hosts Japan from the OQT to be played between 6th and 9th of February, 2020 across four countries- China, Serbia, France and Belgium. D’Tigress last qualified for the Olympics in 2004.

The men’s team, D’Tigers secured their passage to Tokyo 2020 as the best ranked African team at the FIBA World Cup in China early in the year.

In Wrestling, Daniel Igali’s perfect running of the federation has ensured that Nigeria will be on parade in the sport in Tokyo.

Commonwealth Champion, Odunayo Adekuoroye, who is rated as the world third best wrestler in the women 57kg category, picked a Tokyo 2020 Olympic Games ticket through her berth in the semifinals of the 2019 Senior World Wrestling Championships in Nur-Sultan, Kazakhstan.

To secure her Olympics spot, the 2017 world silver-medalist overwhelmed North Korea’s In Sun Jong 12-2 via technical superiority in the quarterfinals, after easily beating her opponents in the previous rounds.
Others so called lesser sports like Badminton made appreciable progress to deserve a mention here. For the first time in a long while, Nigerian players have started to be reckoned as forces in the continent.