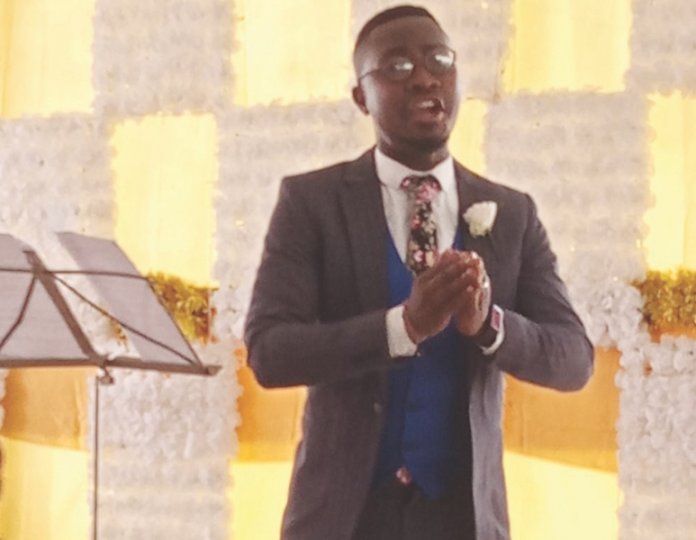 Of course, this isn’t an ideal venue for a concert. It is improvised space, in the penthouse of a building somewhere in Lekki Phase One, Lagos. Expectedly, the rules of a typical concert hall do not strictly apply here. This explains the presence of children below seven years among the expectant audience.

Featuring at the concert are two choirs – Heralds of Harmony led by David Ihechukwu and Amadeus Singers led by Chima Ekeson. Indeed, the concert should be seen as a collaboration between the two choral groups rather than as a contest.
With a not-so-sterling rendition of “Deck the Hall” – the traditional Christmas carol, penned down in English by the Scottish musician Thomas Oliphant – the Heralds of Harmony kicks off the concert on a wobbly note. But, the choir stabilises with the rendition of John Henry Hopkin’s “We Three Kings”.

With his singing of the Franz Schubert’s version of “Ave Maria”, Kingsley Alozie earns the laurel wreath as the most engaging and entertaining of the afternoon event’s soloists. His creative conclusion of the song earns him well-deserved applause.

Wrapping up the concert’s first segment, the Amadeus Singers turns out to be the more cohesive of the two choirs. The choristers – the women donning local print gowns and the men local print tunics – first entertain the audience with a local composition (arranged by Laz Ekwueme), titled “Edena bi Jesu” before concluding the segment with “Ding Dong Merrily on High” written by the English composer George Ratcliffe Woodward, to which the audience’s participation was invited.

The Amadeus Singers return for the concert’s second segment with a soul-stirring rendition of Henry Purcell’s “Rejoice in the Lord”. This is followed by the singing of a local composition by C. N. Osinigwe titled “Eyen Amanade”, during which the choirs invites the audience to clap along.
Tenor soloist Ifeanyi Okwuosha’s return with Georg Friedrich Handel’s “Comfort Ye”, (from Messiah) turns out to be an improvement on his earlier outing.

With Joseph Bodin de Boismortier’s “Affettuoso”, David, Uchechukwu and Chijioke Nwamara – playing the flute, the violin and the piano, respectively – offer a few minutes of reprieve from the longish spell of vocal music.
Heralds of Harmony, on returning for “O Come All Ye Faithful”, invite the audience to sing the second stanza of the song. The second hymn, a Yoruba composition by A Olajide, titled “Kerisimesi Ode”, further livens up the concert.

As the concert nears its conclusion, children culled from among the audience join the Heralds of Harmony for a refreshing rendition of “Joy to the World” by Isaac Watts. The choir continues alone with Handel’s “Lift Up Your Heads” (from Messiah).

Both choirs unite to sing Handel’s well-known “Hallelujah Chorus” before inviting four members of the audience, whose birthdays fall within the festive season on stage for a birthday song.
It soon ends with a medley of the popular English Christmas carol “We Wish You a Merry Christmas” and the Puerto Rican singer José Feliciano’s “Feliz Navidad”.
––This Christmas Concert held in the afternoon of December 22