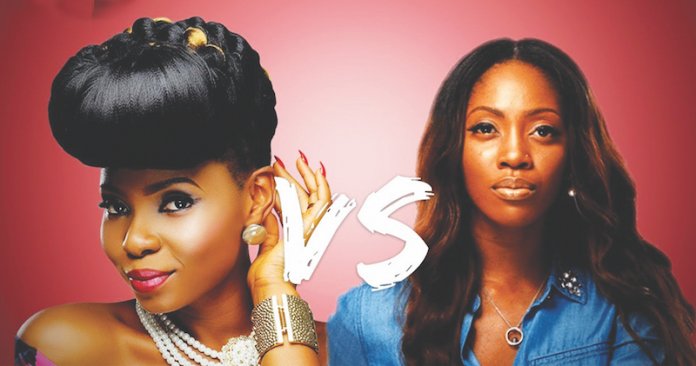 It was actually meant to be a surprise performance in Lagos as it turned out, going by the fact that her name was not among the set of artistes made public for the “Everything Savage” concert headlined by songstress Tiwa Savage. When she eventually came up on stage, the mood was expected going by the beef or rivalry that hitherto existed as some may choose to call it between the surprise guest Yemi Alade and her host, Tiwa, reports Ferdinand Ekechukwu

Until she was brought on stage, quite pronounced was the subtle rivalry between the two biggest female artistes in Nigeria/Africa, Yemi Alade and Tiwa Savage. The singers have not exactly been friends and have never performed together, which perhaps made their teeming fans to tag them as rivals. But on Monday December 23, 2019, the Nigerian superstar, Tiwa Savage held her ‘Everything Savage Concert’ at the Eko Convention Centre.

The event was graced by stars like Wizkid, Olamide, Tekno, Don Jazzy, Joeboy, T-Classic, QDot and so forth. But the moment of the evening was when Tiwa Savage brought out her fellow female artiste, Yemi Alade. Over the years, collaboration between the two female artistes has been far between. The moment was special because Yemi and Tiwa are the two biggest female pop stars in Nigerian music.

So at the themed event, Yemi and Tiwa settled their beef and performed together on stage for the first time. It would be recalled that some months ago, Yemi, during an interview, revealed why she wouldn’t collaborate with Tiwa on a music project. According to her, fans would make such collaboration into a battle of supremacy between the both of them.

Well, all that is in the past now! Upon appearing on stage at the event, the audience was thrown into a feat of excitement as they sang along to Yemi’s hugely successful single, Oh My Gosh. Reacting to the beautiful moment that played out on the stage, many fans of the two powerful female singers flooded social media with praises.

Tiwa and Yemi shocked fans as they hugged, settled their fight and thrilled the fans who wanted more. The Universal Music star had barely introduced Yemi when the expectant crowd screamed wild in ecstasy with some yelling ‘Yemi o!’ “I want to bring on stage my sister,” Tiwa began. “From this very moment on, I don’t give a fuck what you guys hear on twitter or Instagram. If it’s not about love for my sister do not believe it. This is true, true, true genuine love. And I’m so happy that she honoured my invitation to be right here with me right now.”

Continuing, she said “Thank you so much. Let’s do this, let’s do this for the culture, let’s do this.” Yemi then came on stage, opening with her Rick Ross track, ‘Oh My Gosh’ then followed with Na Gode.

Both singers hugged warmly. An obviously elated Tiwa at that moment was seen jumping while raising her hand and placing the other to her chest, dancing as both excitedly performed to the delight of their fans and guests.

A short while into her performance, Yemi paused to acknowledge Tiwa, saying “it’s a beautiful night and ‘mamalet’”, she called Tiwa. “Mamalet, I love you . . . I’m particularly very excited about tonight because this beautiful woman right here has worked so hard. And I appreciate this invite from the bottom of my heart.

I really do appreciate it for everything you stand for, for everything we’ve worked for. I believe, like you said, it’s the beginning of so much for so many female out there.” She then went on to end her appearance, performing her monster hit, Johnny.