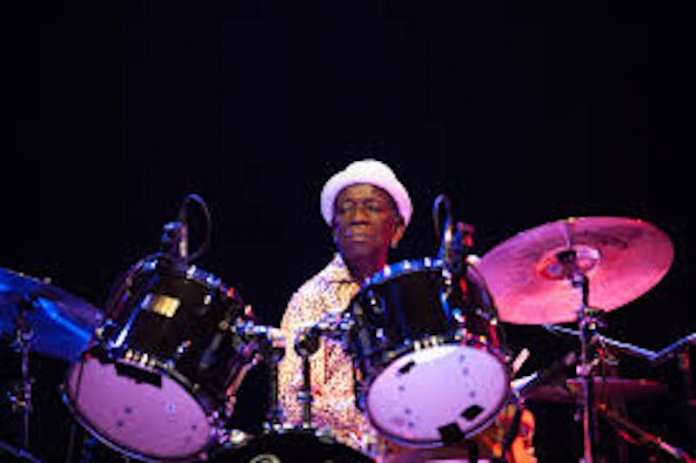 Yinka Olatunbosun
Ace Drummer, Tony Allen known as a former drummer with Fela Anikulapo Kuti is being honoured in a tribute concert organised by Inspiro Productions, Zome International and Metroventures.

The concert which holds on Sunday December 29 at the upscale Reserve Lounge, Restaurant & Bar in Victoria Island Lagos. The CEO, Inspiro Productions and Founder, Lagos International Jazz Festival, Mr. AyoolaShadare described the honoree as a “living legend” whose impact on Afrobeat, jazz and world music is undeniable.

“In Europe and on the global music scene, he is still very active, highly recognised, well sought-after and respected for his contributions to music generally. As he turns 80 next year, we want to be one of the first to wish him a happy birthday in advance here in Nigeria with this event as we know many other things are being planned to celebrate him around the world.

Tony Allen is a worthy cultural ambassador of Nigerian-African music and we are extremely proud of him and honored to be able to celebrate him too. This tribute also comes as recognition of the impact the musical creation he was part of birthing, Afrobeat is making waves globally, with many fusions created and renewed interest generated. Afrobeat has given Nigerian music an identity moving it from the general world music category to being in a genre of its own like reggae and others. Tony Allen playing and collaborating alongside Fela ensured and shaped that. We use this concert to recognize that strongly,” he said.

Born Tony Oladipo Allen in 1940 in Lagos, Nigeria, the phenomenal drummer currently lives and works in Paris. His career and life story have been documented in his 2013 autobiography Tony Allen: Master Drummer of Afrobeat, co-written with author/musician Michael E. Veal, who previously wrote a comprehensive biography of Fela.

As a drummer and musical director of Fela AnikulapoKuti’s band Africa ’70 from 1968 to 1979, Allen was one of the primary co-founders of the genre of Afrobeat music and Fela once stated that, “without Tony Allen, there would be no Afrobeat. A self-taught musician, Allen began playing a drum kit at the age of 18, while working as an engineer for a Nigerian radio station. Influenced by the music his father listened to including Juju and also American jazz, and the growing highlife scene in Nigeria and Ghana, Tony worked hard to develop a unique voice on the drums, feverishly studying LPs and magazine articles by Max Roach and Art Blakey, but also revolutionary Ghanaian drummer Guy Warren (later known as Kofi Ghanaba – who developed a highly sought-after sound that mixed tribal Ghanaian drumming with bop – working with Dizzy Gillespie, Charlie Parker, Thelonious Monk, and Max Roach). Allen was hired by “Sir” Victor Olaiya to play claves with his highlife band, the Cool Cats and he was able to fill the drum set chair when the former Cool Cats drummer left the band. He later played with Agu Norris and the Heatwaves, the Nigerian Messengers, and the Melody Makers.

In 1964, Fela Kuti invited Allen to audition for a jazz-highlife band he was forming as they had played together as sidemen in the Lagos circuit. Allen became an original member of Fela’s ‘Koola Lobitos’ highlife-jazz band. In 1969, following a turbulent and educational trip to the United States, Fela and the newly renamed Africa ’70 band developed a new militant African sound, mixing the heavy groove and universal appeal of soul with jazz, highlife, and the polyrhythmic template of Yoruba conventions.

Allen developed a novel style to complement Fela’s new African groove that blended these disparate genres. With Fela and Africa ’70, Tony Allen recorded more than 30 albums and by 1979, Allen left Africa ’70 in search of his own sound.” Allen formed his own group, recording No Discrimination in 1980, and performing in Lagos until emigrating to London in 1984 then later moving to Paris. Tony has played with numerous local and international artists to critical world acclaim. The NAIJAZZ Afrobeat Tribute will have Tony Allen flying in from Paris France to playing alongside Gboyega Adelaja (late Hugh Masekela’s keyboard), Empress, Adunni Nefertiti, Temmie Ovwasa and a host of others.