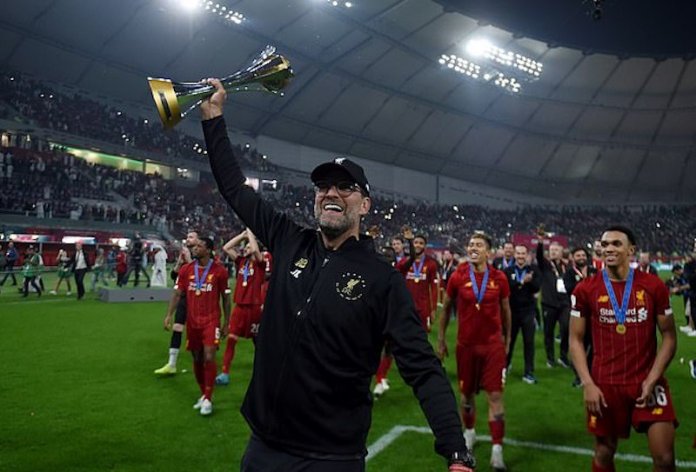 Liverpool were left dismayed by the over-zealous actions of FIFA officials who prevented their squad from celebrating with their fans.

When Liverpool collected the Club World Cup trophy, they spent some time on the pitch before Jurgen Klopp began to bring the players, who had beaten Flamengo, over to the corner of the Khalifa International Stadium that was reserved for the allocation of 1,500 travelling supporters.

But when Klopp tried to go behind the goal and on to the running track to be closer to the fans, FIFA representatives consistently ushered them back and blocked their way. It left the Liverpool contingent bemused and some branded FIFA’s behaviour ‘ridiculous’.

This is the first time in Liverpool’s history that they have won this competition and there will be discussions during the next few days to see whether they will display the trophy at Anfield before next Sunday’s Premier League fixture against Wolves.

It was a blot on the night but a bigger concern was the injury sustained by midfielder Alex Oxlade-Chamberlain, whose right ankle was in a protective boot for the trophy ceremony after he was hurt in a collision with Flamengo captain Everton Ribeiro.

Oxlade-Chamberlain, who is on crutches, will have a scan on Monday to determine whether he has damaged ankle ligaments or, more worryingly, suffered a rupture that would lead to a significant lay-off. He received intense treatment, to combat the swelling, on the eight-hour flight back from Doha.

There is no time for Liverpool to rest, as they face a demanding assignment at Leicester on Boxing Day but this triumph has capped a memorable 2019.

It is, numerically, their most successful year since 2001 for winning trophies. The aim is to win the Premier League in 2020.