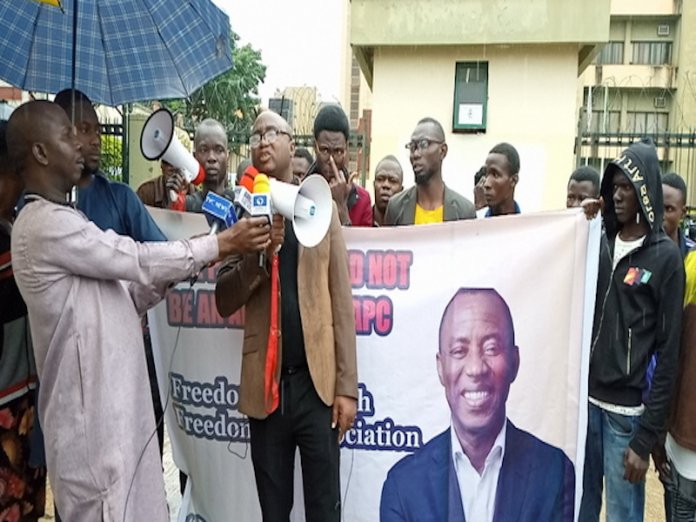 Hope that the detained convener of#RevolutionNow protest, Mr. Omoyele Sowore, would regain freedom before Christmas was yesterday dashed following the refusal of Justice Ahmed Mohammed to take his motion challenging his continued detention by the Department of State Services (DSS) and his subsequent withdrawal from the suit.

Sowore had on December 15 sued the Attorney General of the Federation (AGF) and Minister of Justice, Mr. Abubakar Malami (SAN), and the Director General of the DSS, Mr. Yusuf Bichi, at the Federal High Court, sitting in Abuja, over his re-arrest and continued detention by the federal government.

He also filed an ex-parte application seeking an order of the court to compel the DSS to immediately and unconditionally release him from detention.

On December 17, shortly after the suit was mentioned, trial judge, Justice Inyang Ekwo, ordered service of court process on the defendants and adjourned till December 23 (yesterday) for hearing of the motion.

However, there was a new development yesterday as Justice Mohammed took over the matter.
Justice Mohammed is one of the vacation judges at the Abuja Division of the Federal High Court, which was saddled with the responsibility of hearing the suit bordering on alleged breach of the fundamental rights of Sowore.

Sowore was re-arrested on December 6, within the premises of the Federal High Court Abuja, by operatives of the DSS, barely few hours after he regained freedom from a four-month detention. He was still in custody as at the time of filing this report.

However, when the matter was called yesterday, Justice Mohammed declined to entertain the motion on grounds of likelihood of bias.

According to the judge, he could not go on with the matter because Sowore’s media outfit, Sahara Reporters, had accused him in 2016 of being a bribe taker.

He was accused of corruption in the ongoing trial of a former Governor of Benue State, Senator Gabriel Suswam, who is being prosecuted by the Economic and Financial Crimes Commission (EFCC).

Justice Mohammed noted that the reports by Sahara Reporters in 2016 and 2019 made him to withdraw from the ex-governor’s trial.

He said when the first report was published in 2016, he was prevailed upon by the prosecution and defence teams to continue with the case.

He said on continuing with the case, a similar report was published in June this year.
He said the situation put him in a situation whereby if he ruled in favour of Sowore, it could be perceived as having been blackmailed by Sowore to so rule.

The judge also argued that in the event that he ruled against the activist, he could be perceived as being vengeful.

“Justice is rooted in confidence. That is to say none of the parties should have fear or apprehension that he will not get justice before a court,” the judge said.
Justice Mohammed held that irrespective of where justice would go at the end of the day, he would be accused of bias.

He added that the best thing is for him to return the case file to the Chief Judge of the Federal High Court for re-assignment to another judge.

He consequently recused himself from the suit.
Responding, Sowore’s lawyer, Mr. Femi Falana (SAN), consented with the view of the judge to step aside from hearing the matter.

Sowore and Olawale Bakare are standing trial on a 16-count charge bordering on treasonable felony, money laundering amongst others.

They pleaded not guilty and were granted bail in the sum of N100 million and N30 million, respectively.

The DSS had initially refused to release them on bail even after they met their bail application, until Justice Ijeoma Ojukwu issued a 24-hour order for their release.
However, Sowore was re-arrested on December 6, shortly after he was released on bail by the DSS over a yet-to-be disclosed offence.

In a three-paragraph affidavit in support of the motion ex-parte, the applicant prayed the court for an order for the production of the applicant for an unconditional release in pursuant of the release order made by the court on November 6.

The application was predicated on the grounds that the applicant was arrested on August 2 without a warrant of arrest and was further detained from August 2 to 7, without an order of court thereby breaching his fundamental human rights.

The plaintiff further claimed that the respondents have failed or refused to obey the orders of Justices Taiwo Taiwo and Ijeoma Ojukwu both of the Federal High Court, Abuja, which ordered his release on bail.