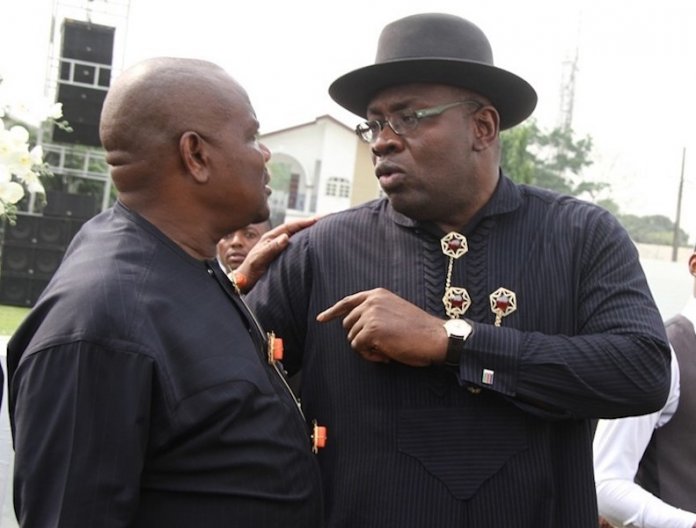 The Governor of Bayelsa State, Hon. Seriake Dickson, for the first time at the weekend publicly responded to what he said were public outbursts against him and the people of Bayelsa by his Rivers State counterpart, Chief Nyesom Wike, describing the recent remarks by Wike as childish and careless.

There had been a brewing altercation between both leaders after Wike a couple of weeks ago accused Dickson of planning to cause crisis in the state following his visit to the Amayanabo of Kalabari, King Theophilus Princewill, without the Rivers governor’s knowledge or approval.

Wike had further threatened to sanction the 90-year-old monarch if such a case is reported against him in the future, stressing that he exercised restraint by not removing the Amayanabo at the time.

However, last week’s judgment by a Federal High Court in Abuja on the contested Soku oil wells located in communities bordering both states seemed to have further aggravated the sour relationship between the two leaders as Dickson accused the Rivers governor of manipulation and unwarranted hostility against him and the people of Bayelsa.

He maintained that both in terms of biological age and seniority as to who became governor first, he was not mates with the River’s governor, noting that he had exercised restraint because of Bayelsa’s historical ties to the state.

Dickson, who spoke during a media chat at the Government House in Yenagoa, stressed that Wike was merely using the disputed oil wells between the two sister states to create disunity and to cover up the deliberate underdevelopment of Rivers Ijaw communities by pretending to be their champion.

The Bayelsa governor, who appeared furious, said as a Nigerian and a bona fide Ijaw son, he and indeed any past or future governor of the state reserved every right to travel anywhere without being questioned by anybody.

According to Dickson, instead of Wike to encourage brotherliness between the two states, he had in the last four to five years embarked on what he described as unwholesome behaviour towards him and the people of Bayelsa.

The governor who said he had been restraining himself from responding to the unprovoked and unguarded remarks and excesses of his colleague out of respect for the Rivers people over the years warned Wike to stop seeing Bayelsa as an annex of his political empire.

Dickson argued that he was not interested in claiming ownership of Soku, a community in Rivers, but added that he was convinced that the disputed oil wells are located in Oluasiri, Nembe local government area of Bayelsa State.

He accused Wike of ‘reckless expansionist agenda’ which he argued had led him to start needless wars with all the neighbouring states of Imo, Akwa Ibom, Bayelsa and more to come to the detriment of the unity of the Niger Delta and the South-south which is so critical to the zone at this time.

He said: “I have been reluctant to respond publicly out of respect for our historical ties. The respect that the good people of Rivers state that he is representing deserve.

“The other point is that, yes, Wike can attack Bayelsa , because he doesn’t have indigenous Ikwere people in Bayelsa, but the governor of Bayelsa has indigenous people there who are major stakeholders. As a result of this, for the past four or five years since he started his childish and unguarded, drunken behaviour, I have been very circumspect in responding.

“But I have had to now formally do so and governor Wike knows that I am not someone who shies away, but I had to hold myself because the governor of Bayelsa represents much more than the governorship of a state.”

Dickson said judging from Wike’s needless antagonism to him and Bayelsans over the years and his recent unprovoked outburst concerning an area with a very volatile history, it remains an issue of grave concern to Bayelsans and indeed the Rivers people that their governor lack the capacity to appreciate the grave implications of his intemperate outbursts and actions.

He also referred to the Supreme Court decision on the issue that directed the National Boundary Commission to carry out a fresh delineation and demarcation exercise in the affected area.
Dickson wondered why Wike was afraid of the boundary commission doing its job, reminding the governor how the Rivers delegation led by its deputy governor at the time, Mr. Tele Ikuru, pulled out of the exercise in 2013.

While alleging that Wike was interested in dividing the Ijaw people and driving a wedge in the long-held smooth relationship between the two states, Dickson urged the people of Rivers to rein in their governor before he does more damage.

“And I want that recorded, that Governor Wike is deliberately inciting disunity in ijaw land because of his ethnic supremacist political agenda which he knows that Bayelsa, particularly Governor Dickson and my agenda will not support. That’s what he’s doing,” he alleged.

Recalling his visit in April to the Amayanabo, Dickson explained that he met the foremost traditional ruler to condole with the people on the killing of Ijaw sons and daughters of the area during Wike’s own gubernatorial election.

He noted that he made sustained efforts to contact Wike without success and directed his Chief of Staff and the ADC to speak to their counterparts in Rivers, who promised to inform his boss of the impending trip, which they did, because according to him Wike had destroyed all other lines of communication between both leaders before then.

The governor said that he planned to lead other Ijaw leaders to participate in any activity that might be put in place to celebrate the foremost monarch, the Amanyanabo of Kalabari who would turn 90 in January 2020.

He said that while it is normal protocol where relationships are cordial with people behaving normally to extend courtesies, such conditions cannot apply in an abnormal environment encouraged by Wike over years.
Accusing Wike of ‘going too far this time’ he upbraided the Rivers governor for threatening to depose the monarch because the royal father received him in his palace.

Dickson added: “And I want to make it clear as governor of this state, either me or any other person who will be governor, we don’t need Wike’s permission to visit our traditional rulers and elders in Port Harcourt or any part of Rivers State.

“Since he doesn’t understand courtesy and is not prepared to show courtesy, then that courtesy will not be extended to him. Bayelsa is not an annex of Rivers State that he can intimidate at will.”
“If we are quiet, it’s because it is strategic, especially with me as the oldest governor even in the south-south, but this nonsense from Wike must stop.

“Wike should stop interfering with the politics of Bayelsa State, you all know what he did in the PDP primaries and the roles he played supporting the APC in their federal take over of our state, there are so many things he has been doing that I keep quiet about.

“Wike should learn to respect his colleagues for whom he has shown scant regards not just for me, and Bayelsa. He is having oil wars with every state around him; with Imo and Akwa Ibom states. What is wrong with him?”
Dickson urged the people around the borders of both states to maintain the existing peace between them, noting that all the issues in dispute will be resolved by the necessary authorities in due time.