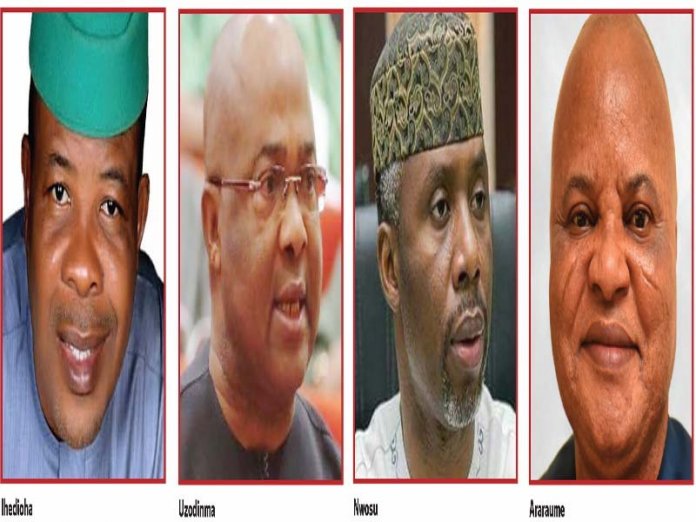 Nseobong Okon-Ekong writes that opponents of Governor Emeka Ihedioha of Imo State have resolved to take their grievance to Supreme Court, having lost at the trial and appellate courts

The Supreme Court is expected to fix a date for hearing of appeals on the Imo State governorship election any moment from now.

Governor Emeke Ihedioha’s opponents are praying the Supreme Court to overturn the judgments of the Imo State Election Petition Tribunal and the Court of Appeal judgment that upheld his victory in the March 9 election.

Ihedioha won in 11 of the 27 local government areas, defeating about 69 other candidates.

The Returning Officer declared Ihedioha the winner “having satisfied all the requirements of the law and scored the highest number of votes”.

Ihedioha’s opponents urged the Election Petition Tribunal to cancel the election on the grounds that he did not meet the mandatory 25 per cent in two-thirds of the local government areas.

They also alleged substantial non-compliance with the electoral laws.

But both the Tribunal and the Court of Appeal dismissed the case.

However, an association, the Imo Professional Group, faulted both judgments, saying the courts did not do justice.

In an advertorial signed by Dr. Ifeanyi Emeka, the group said, “It is a cardinal principle of law that justice must not only be done, but seen to be done.

“The ‘justice’ of the judgement of the Imo State Election Tribunal, chaired by Justice Malami Dongondaji, and the Court of Appeal by five man panel led by Justice Oyebisi Omoleye, can definitely not be seen from the judgment of the courts.”

The group said Ihedioha failed to meet the constitutional minimum requirement of scoring 25 per cent of the votes cast in each of at least the two-third of all the local government areas (LGAs) in the state.

“It, therefore, baffles one’s imagination why and how the ‘learned judges’ can find legal reasons to ignore such a brazen wrong against the constitution,” the group said.

But, another group, the Imo Leaders of Thought (ILT), disagreed with the Imo Professional Group, and warned against denigrating the judiciary.

To them, the statement by the Imo Professional Group “is a direct assault on the integrity of the nation’s judiciary.”

“What the authors of the publication attempted to achieve, throughout the 10-paragraph advertorial, was to discredit the learned judges involved in the matter at both the Tribunal and the Court of Appeal.

“We are, however, of the view that this growing penchant to turn the Nigerian judiciary into a whipping boy is something every well-meaning and patriotic Nigerian must rise against.

“Much as we agree that the laws of the land allow citizens the liberty to seek remedies where they are not satisfied with judicial pronouncements, the growing tendency by political litigants to brand every court ruling that is not in their favour as a ‘travesty’, makes a mockery of our collective integrity as a people,” the Imo Leaders of Thought said.

ILT noted that the INEC, in declaring Ihedioha winner, said he satisfied all the requirements of the Electoral Act and the Constitution.

“This means that in the eyes of the law, the result declared by the electoral body was correct, valid and authentic. Therefore, the burden of proof to the contrary lies on the petitioners.

“The electoral laws require that to establish that a person did not satisfy the constitutional requirements as winner of an election, the results will have to be recalculated, beginning from the polling units; the reason being that votes are cast at the polling units.

“But throughout the trial, none of the petitioners was able to provide any new configuration of results from the polling units that could prove what INEC declared wrong.

“We agree that these three brothers of ours have the right to pursue their cases to the highest level, but the desperation they are manifesting in the matter is a let down to the rest of the people of the state.

“Imolites are amused that these three hitherto mortal enemies, after losing woefully at the Tribunal and Court of Appeal, have proceeded to the Supreme Court as one unit, through a covert blackmail of the entire judiciary, as could be seen from their joint advertorial.

“But the people of the state, who voted overwhelmingly for Governor Ihedioha, are undeterred by the fact that the matter at hand is about the requirements of the law and are confident that the judiciary will not be swayed by the paranoia of recalcitrant clansmen.”

The Election Petition Tribunal, chaired by Justice Malami Dogondaji, in a September 21 verdict, held that the petitioners were unable to prove the allegations.

Dismissing Uzodinma’s petition, the Tribunal held that the results he presented were not recognised by law as they neither emanated from, nor were authenticated by, INEC.

The Tribunal held that Ararume’s expert witness could not be sustained having not participated in the election.

It dismissed Araraume’s and Nwosu’s petitions for lacking in merit and for being incompetent.

“Failure to discharge the heavy burden of proof makes the petition liable for dismissal and it is accordingly dismissed,” the tribunal held.

Not satisfied, Ihedioha’s opponents headed for the Court of Appeal.

But, on November 19, the appellate court dismissed their appeals.

A five-man panel, led by Justice Oyebisi Omoleye, dismissed the appeals on grounds that they lacked merit.

The court awarded N500,000 cost against all the appellants in Ihedioha’s favour.

The Court of Appeal upheld the Tribunal’s findings and conclusions.

The appellate court found that Uzodinma, who came fourth, called no witness from the polling units, ward or local government level to prove that Ihedioha did not score 25 per cent of the votes cast in 18 out of the 27 LGAs.

The Court of Appeal discountenanced a set of documents in which he claimed to have scored substantial votes from 386 polling units, but which he alleged were excluded by INEC.

The appellate court allowed a cross-appeal to the effect that with respect to Section 179 (3) (4) and (5) of the 1999 Constitution (as amended), only the person who came second in an election can make a case regarding Section 179 (2).

Ihedioha’s lawyers had contended that no other contestant in the March 9 election, except Nwosu, was competent to canvass the issue of whether Section 179 was complied with.

On Ararume, the appellate court agreed with the Tribunal’s position on his expert witness.

The Tribunal had found that the witness had degrees in Education rather than in Statistics.

He relied on Form EC8D, being the overall collation of results by INEC, and not polling units, ward or LGA results, and could not successfully demonstrate how he arrived at his figures from Form EC8D.

Ararume’s other witness, his state collation officer, testified as to events that took place at the polling units in different parts of the state.

The Tribunal held that his evidence was hearsay, not based on what he witnessed.

Both the Tribunal and Court of Appeal disagreed with Nwosu, dismissing his claims that Ihedioha did not satisfy the requirements of geographical spread as stipulated in Section 179 (2).

The AA candidate’s witness, a Teacher at the College of Agriculture, Ishiagu in Ebonyi State, admitted under cross-examination that the only document he analysed was Form EC8D – the overall INEC-collated result.

The Tribunal and the Court of Appeal concluded that Nwosu’s “expert” was a mere sympathiser, who was out to support the petitioner’s case rather than help the court arrive at the truth.

The Court of Appeal held that none of the petitioners was able to establish, by credible evidence, that Governor Ihedioha did not meet the requirements of geographical spread as stipulated in Section 179 (2).

The Court of Appeal noted that Araraume did not predicate his original petition on the geographical spread, but called for cancellation of the election on allegation of fraud.

It cautioned Ararume on the point that he cannot present one case at the trial court and an entirely different one on appeal.

AA withdrew from the petition, and a high court struck out Nwosu’s candidature, which was upheld by both the Court of Appeal and the Supreme Court.

Section 221 of the 1999 Constitution provides: “No association, other than a political party, shall canvass for votes for any candidate at any election…”

With the Constitution having no provision for independent candidature, observers will be keen to see how the Supreme Court resolves his prayers.

The electoral laws require that to establish that a person did not satisfy the constitutional requirements as winner of an election, the results will have to be recalculated, beginning from the polling units; the reason being that votes are cast at the polling units. But throughout the trial, none of the petitioners was able to provide any new configuration of results from the polling units that could prove what INEC declared wrong