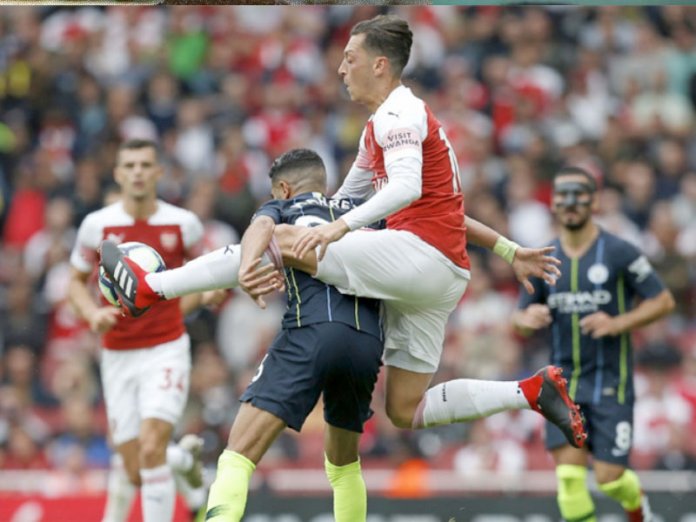 After amassing an unprecedented 100 points in his first Premier League win and just two points short of the same number of points in his back-to- back victory, Manchester City’s attempt to win a record third title has been dismal with the Citizens already 14 points behind league leaders Liverpool.

To make matters even worse for Pep Guardiola’s side, the team was last weekend beaten at home by neighbours-Manchester United 2-1 to halt any dream of a third title in a row. With the team away to Arsenal on Sunday, another defeat may not be ruled out

Two teams under pressure will go head-to-head in what looks a cracking Premier League contest as Arsenal host Manchester City on Sunday.

Despite beating West Ham on Monday night, and securing Europa League qualification with a 2-2 draw against Standard Liege in Belgium on Thursday, the home side have been far from convincing during Freddie Ljungberg’s brief reign as interim boss.

In all, the Gunners have won just one of their last 11 games in all competitions, and have not tasted victory at the Emirates since beating Bournemouth 1-0 on October 6.

Pep Guardiola’s City, meanwhile, appeared to surrender any hope they had of retaining the title in last weekend’s 2-1 Manchester derby defeat, and now trail runaway leaders Liverpool by a massive 14 points.
It would be foolish to completely write off Arsenal’s chances on Sunday, especially with City having lost four of their 16 League games this season.

However, the likes of Raheem Sterling and Kevin de Bruyne should have too much quality for an Arsenal defence lacking confidence.

The last time the two sides met, Sergio Aguero’s 14th hat-trick for the club earned Manchester City a 3-1 win over Arsenal at the start of February.

But Aguero was not to be stopped; grabbing his second on the stroke of half-time before poking home Raheem Sterling’s cross after the hour mark.

However, Aguero suffered a muscle injury last month during a match against Chelsea, and he’s yet to return to the team – missing matches against Newcastle, Burnley and Manchester United.

John Stones had to come off before the hour mark after an injury against United at the weekend. David Silva completed the 90 minutes, but he ended the game carrying a knock.

The trio all missed the game against Dinamo Zagreb on Tuesday and will likely not face Arsenal this Sunday.

Most thought the game was a write-off for the Gunners a week or two ago, and many still hold that opinion. There are small signs it might be a little more competitive now though.

Arsenal finally have a win under their belts, whilst City are on a bad run of form by their standards. They’ve only won one of their last four games against Burnley. Manchester United beat them 2-1 at home and they drew with Newcastle and Shakhtar Donetsk.

Ljungberg’s side still need all the help they can get. Seeing the likes of Aguero, Stones and Silva miss out on the starting lineup could give them another boost.

Meanwhile, Arsenal defender, Sokratis Papastathopoulos believes a home win over reigning Premier League champions Manchester City this weekend can see Arsenal’s disappointing season ‘explode’ into life.
The Greek defender has called on his team-mates to do the ‘dirty work’ and ensure they match stuttering City at the Emirates Stadium on Sunday afternoon.

Arsenal have won just one of their last 11 games in all competitions and had to battle from two goals behind to earn a 2-2 Europa League draw at Standard Liege on Thursday night.

The Gunners have gone almost four years without a league victory over City, who won 2-0 at the Emirates Stadium last season in Unai Emery’s first game in charge.

Arsenal currently sit ninth in the table as their domestic season threatens to fizzle out before Christmas – but Sokratis feels victory on Sunday could kick-start the campaign.

‘Of course it is a very difficult game.’ the 31-year-old said of the challenge of hosting Pep Guardiola’s side.

‘Sometimes, these games are games where you can explode. I think we need one good game in our home to explode and I hope we will have that on Sunday.

‘But, first of all, we have to run all together, try to help each other and intensity is the most important thing in football, of course you have to have quality but to show the quality you have to first show intensity, win the duels, be tactically-organised.

‘I think now the manager tries to explains what he likes from us and I think he gave a lot of attention to the organisation and we work very hard until now. I hope things in the future are going to be better.’

A 3-1 win at West Ham on Monday night ended a nine-match run without a victory and, having battled back in Liege, Papastathopoulos feels confidence is starting to return to the ranks and can be bolstered once again this weekend.

‘I think it’s coming back,’ he said.
‘It’s a big point this. We lost confidence because we didn’t win for a long time. It’s important also, it’s normal for young players.

‘They don’t have the experience before to live this, to lose their confidence. As a team we lost confidence. Now we try to find balance.

‘Maybe. If we win, create and be more organised the confidence is there. It’s not about quality. The team has quality.

Ljungberg will be hoping to have both Nicolas Pepe and Hector Bellerin fit after the pair missed the trip to Belgium with knee and hamstring injuries respectively.

Meanwhile, the issue of appointing a new manager continues to be a focal point at the Emirates and Arsenal have been adviced to go all out to appoint Carlo Ancelotti as their next manager.

Ancelotti was sacked by Napoli on Tuesday and he has been linked with a return to the Premier League. Arsenal and Everton are both on the lookout for new permanent managers after sacking Unai Emery and Marco Silva respectively.

Ancelotti won the Premier League and FA Cup double during his first spell in England with Chelsea.

The Italian has also had success in charge of AC Milan, Real Madrid and Bayern Munich.