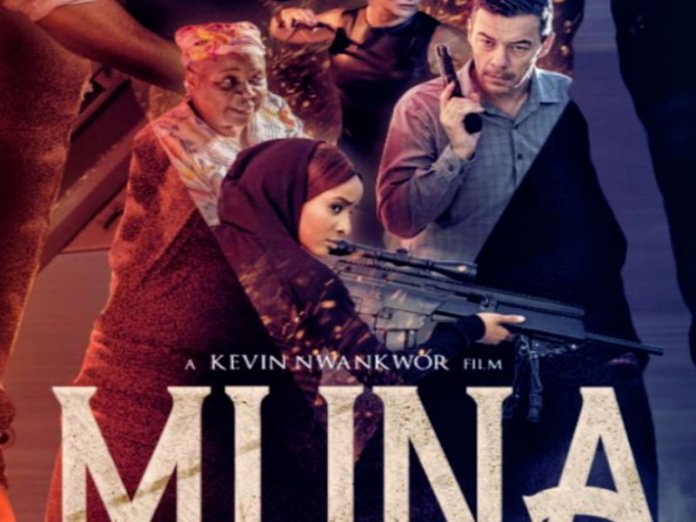 After the much talked about trailer seen at the cinemas in Lagos and Abuja, MUNA – Nollywood’s first undiluted action thriller with Hollywood stars – will finally hit the cinemas with a bang this Friday, December 6, across Nigeria, Liberia and Ghana.

The insightful movie, which features Nigeria’s screen diva – Adesuwa Etomi-Wellington – as the lead actor explores tactical means yet romanticism to expose the ills crippling the Nigerian boarders which have become porous to human and sex trafficking.

The story of MUNA is ironical. The protagonist, who set out to revenge the mischief done to her – got entangled in a romantic relationship with her archenemy’s son. Love or vengeance, which would she dare embrace?

Hence, MUNA has come to create awareness. “Human and sex trafficking is most rampant in poor communities. They get sweet promises dashed against rocks”, Nwankwor added.

Indeed, MUNA displays the power of love. It is a transatlantic film that aims to put an end to human and sex trafficking yet tries to melt the hearts of the victims and survivors from becoming a nurtured assassin or take laws into his or her own hands.

The big-budget movie is a riveting flick with a fusion of Nigerian and Europe settings. MUNA has every spice a thrilling action movie needs. From gun fights, martial arts, big explosions, suspense, lies, deceptions, romance, and a touch of humour.

Although not all action movies have both heroes and villains, MUNA is an exception. It has a heroine and a villain. In the climax of the event, love stood above all.

MUNA’s special effects and action scenes are spectacular. Who would think a Nigerian screen diva could do some stunts and punches without obvious film tricks?

Obviously, MUNA is G-rated. It is designed to educate, enlighten, entertain and inform the world on the consequences of sex and human trafficking.

MUNA, which promises to help create more awareness, gives one message to the world not to allow one’s past to shape one’s future. “We are products of our past, not prisoners of it”.